14 hurt as car driven into crowd in Australia 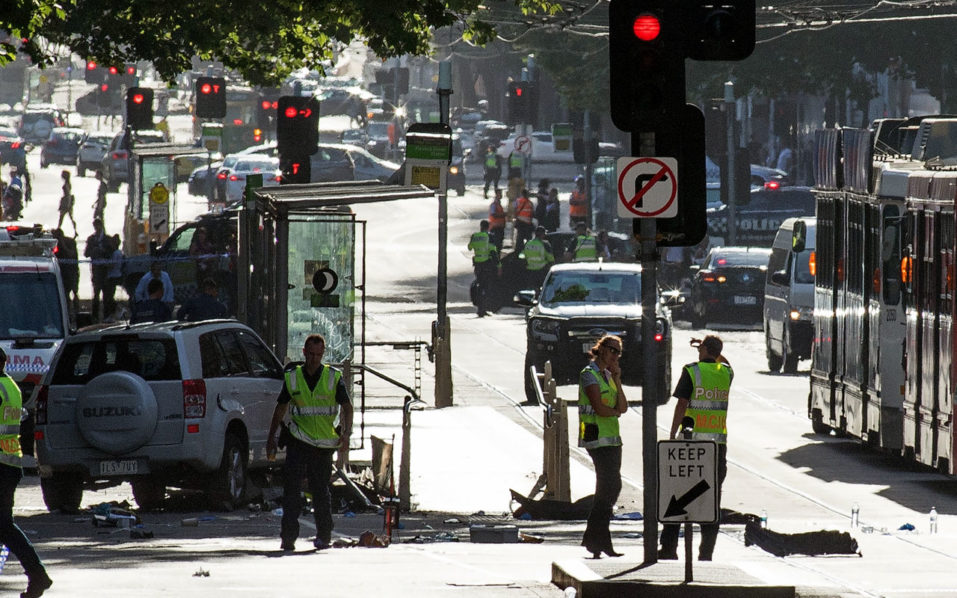 A white SUV (L) sits in the middle of the road as police and emergency personnel work at the scene of where a car ran over pedestrians in Flinders Street in Melbourne on December 21, 2017. The car ploughed into a crowd in Australia’s second-largest city on December 21, injuring at least a dozen people, some of them seriously, officials said. / AFP PHOTO / Mark Peterson

A car ploughed into a crowd in Australia’s second-largest city on Thursday in what police said was a “deliberate act” that left more than a dozen people injured, some of them seriously.

Witnesses said people were thrown through the air after being hit by the vehicle, which did not appear to be trying to stop as it “mowed everybody down”.

Victoria state police said they had arrested two men, including the driver of a car that “collided with a number of pedestrians” at a busy intersection in downtown Melbourne.

“We believe based on what we have seen that it is a deliberate act. The motivations are unknown,” Victoria Police’s Commander Russell Barrett told reporters.

Barrett would not comment on whether the incident was terror-related, only saying “it is the early days of the investigation and that is unknown”.

Paramedics had taken a number of people to hospital, some of them with serious injuries, ambulance officials said.

Photographs from the scene showed one man wearing a long-sleeved top being dragged from a white Suzuki Grand Vitara, while a bearded second man wearing a red checked shirt was seen handcuffed and sitting on the ground.

‘Thump, thump’
In a tweet, police appealed to members of the public to upload any images they might have of the incident to help assist with their investigation.

A witness, named only as Sue, told Melbourne radio station 3AW that she heard screams and saw “people flying everywhere”.

“We could hear this noise, as we looked left, we saw this white car, it just mowed everybody down,” she said.

Another witness, John, told ABC Radio Melbourne that he saw an “SUV coming at high speed”.

“(I) really just heard the collision with people with bags and what must be shopping trolleys — and I hope not prams,” he said.

“I’ve really never seen anything like this before and I haven’t stopped shaking.”

The intersection is one of Melbourne’s busiest, a local shop owner told national broadcaster ABC, and is particularly crowded at this time of the year ahead of the Christmas break, with school holidays under way.

The driver, whose case is still being heard in court, had been pursued by police prior to the rampage after he had allegedly stabbed his brother.

The attack, which was not terror-related, shocked Australians and took place near Melbourne Park where top tennis stars were playing in 2017’s opening Grand Slam.

Canberra has become increasingly worried about homegrown extremism and officials say they have prevented 13 terror attacks on home soil in the past few years.

Suggested steps include deterrent options like fencing and closed circuit cameras, and delaying approaches such as trees and bollards to slow down vehicles.

Melbourne has also been installing a public siren system and more security cameras to warn people of a possible terrorist attack or other serious threats.

But the Age newspaper said the warning sirens had not been activated for Thursday’s incident, and police did not appear to have enacted counter-terrorism lock-down strategies either.

Maim and kill
While the circumstances surrounding Thursday’s incident were still unclear, there have been several cases of vehicles being used to deliberately maim and kill.

The most deadly such case was in the southern French city of Nice on July 14, 2016, when 31-year-old Tunisian Mohamed Lahouaiej-Bouhlel ploughed a 19-tonne truck down a beachside promenade, killing 86 people and injuring hundreds more.

Almost exactly one year ago, on December 12, another Tunisian national, 24-year-old Anis Amri, hijacked a truck and slammed it into crowds of people at a Christmas market in Berlin.

A total of 12 people died in that attack with dozens injured. Amri was shot dead four days later in Milan, with the Islamic State group claiming responsibility.

More recently, eight people were killed in New York when a pick-up truck was driven into cyclists and pedestrians, in what was described as the first deadly “act of terror” in the city since the September 11, 2001, attacks.

Other deadly attacks using vehicles have taken place this year in London, Stockholm and Barcelona.