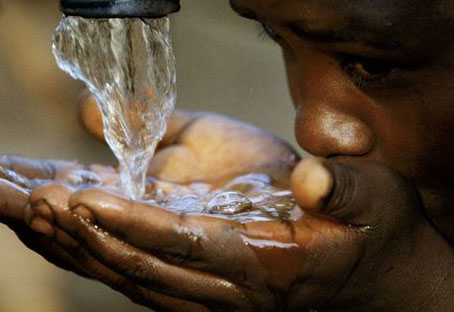 The European Union, EU, on Wednesday said that 62 million Nigerians were currently living without access to clean water.

EU’s Head of Delegation to Nigeria and the Economic Community of West Africa, ECOWAS, disclosed this at the inauguration of a solar-powered motorised borehole in Lo-Gwom Kwi community, Riyom Local Government Area of Plateau.

The News Agency of Nigeria reports that the project was at the instance of the United Nations Children’s Fund, UNICEF, and funded by the European Union, EU.

NAN also reports that the project tagged “Water Supply and Sanitation Sector Reform Programme, WSSSRP, III”, is aimed at improving access to water, sanitation, and hygiene in the rural communities in the state.

Karlsen, who described the situation as “worrisome”, also said that 27 per cent of the total population of the country travelled long distances daily to get potable water.

He also decried the high rate of open defecation in the country, saying that 47 million Nigerians defecated in the open.

“Sixty-two million people in Nigeria continue to live without access to improved water and spend more than 30 minutes travelling to fetch water.

“This is a very worrisome situation that needs urgent action,” he said.

According to him, only 5.5 per cent of schools and 5.2 per cent of health facilities have basic, gender-sensitive water, sanitation, and hygiene services in line with the Sustainable Development Goals (SDGs)

Karlsen said that the situation compelled the EU to invest heavily on improving water supply and sanitation in the country in the past five years.

Mr Hawkins, who urged the beneficiaries of the facilities to guard against vandalism, further advised them to find local solutions to the problem of open defection and improve on their personal hygiene and sanitation.

“Use the water we have provided to drink, cook and wash your hands so as to remain healthy at all times.

READ ALSO:   France to establish own digital tax if EU reaches no deal by March — Minister

“Look after these facilities for your benefit and that of future generation. Ensure you maintain and sustain them,” he advised.

Inaugurating the project, Governor Simon Lalong, said that the intervention would go a long way toward addressing lack of clean water, sanitation, and hygiene, particularly in rural communities.

Represented by Richard Tokma, the Secretary to the state government, Lalong said the partnership was in furtherance of his administration’s commitment to making potable water available to all parts of the state.

“This partnership is indeed a demonstration of our commitment and desire to promote the well-being of our people through the provision of clean water and improved sanitation and hygiene,” he said.