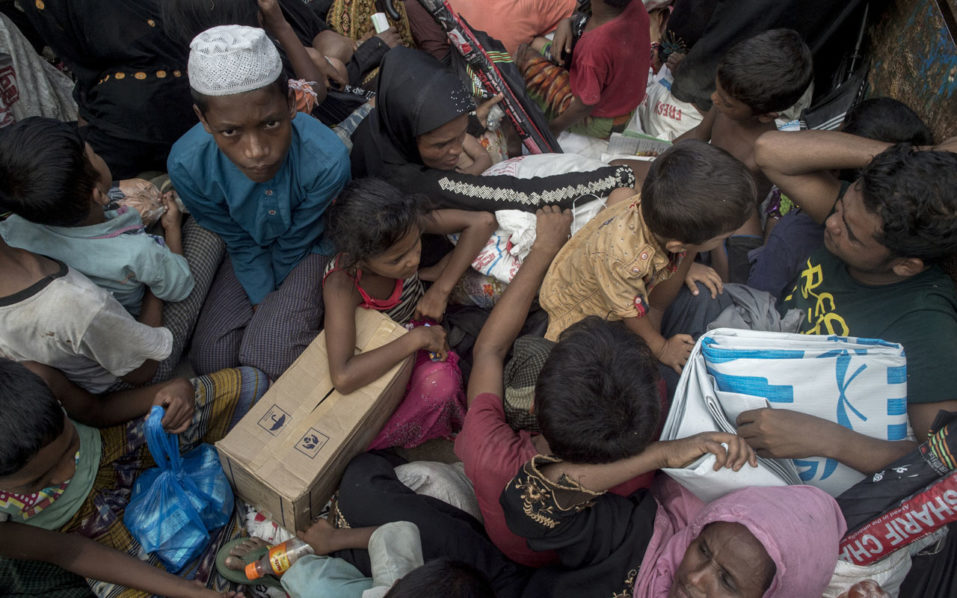 Rohingya Muslim refugees ride on the back of a truck which head towards Nayapara refugee camp after crossing the border from Myanmar, in Teknaf on October 3, 2017. The United Nations has said it would seek $430 million to increase operations in the camps along the Bangladesh-Myanmar border. The Rohingya Muslims have poured across the frontier to escape a military crackdown in Buddhist-majority Myanmar. / AFP PHOTO / FRED DUFOUR

At least 6,700 Rohingya Muslims were killed in the first month of a Myanmar army crackdown on rebels in Rakhine state that began in late August, Doctors Without Borders (MSF) said on Thursday.

The figure is the highest estimated death toll yet of violence that erupted on August 25 and triggered a massive refugee crisis, with more than 620,000 Rohingya fleeing Myanmar for Bangladesh over a three-month period.

The UN and US have described the military operation as “ethnic cleansing” of the Muslim minority, but have not released specific death tolls.

“At least 6,700 Rohingya, in the most conservative estimations, are estimated to have been killed, including at least 730 children below the age of five,” MSF said Thursday.

The group’s findings come from six surveys of more than 11,426 people in Rohingya refugee camps and cover the first month after the crisis erupted.

“We met and spoke with survivors of violence in Myanmar, who are now sheltering in overcrowded and unsanitary camps in Bangladesh,” said the group’s medical director Sidney Wong.

“What we uncovered was staggering, both in terms of the numbers of people who reported a family member died as a result of violence, and the horrific ways in which they said they were killed or severely injured.”

Rohingya refugees have shocked the globe with consistent stories of security forces and ethnic Rakhine Buddhist mobs driving them out of their homes with bullets, rape and arson that reduced hundreds of villages to ash.

Rights groups say the crackdown was the culmination of years of persecution and discrimination against the Muslim group in mainly Buddhist Myanmar, where they are effectively stateless and denigrated as outsiders.

The MSF surveys put a number to the horrors.

Gunshot wounds were the cause of death in 69 percent of the cases, according to the aid organisation.

Another nine percent were reported burned alive inside houses, while five percent died from fatal beatings.

For children under five, nearly 60 percent died after being shot, MSF found.

– ‘Rohingya targeted’ –
MSF said the peak in deaths coincided with the launch of “clearance operations” by the army and local militias in late August, and showed “that Rohingya have been targeted”.

Myanmar’s government did not respond to a request for comment.

But it has consistently denied abuses in Rakhine, saying the crackdown was a proportionate response to the Rohingya militants who attacked police posts on August 25, killing around a dozen officials.

The army has put the official death toll at 400 people, including 376 Rohingya “terrorists”.

Authorities have blocked a UN fact-finding mission from accessing the conflict zone in northern Rakhine state.

The investigators visited refugee camps in Bangladesh in late October and said — based on interviews — that the total number of deaths was unknown but “may turn out to be extremely high.”

The Rohingya are not recognised as an ethnic group in Myanmar and have been systematically stripped of their legal rights.

Before the latest crisis, Bangladesh was already hosting hundreds of thousands of Rohingya who fled previous waves of persecution.

“I think the MSF figure is an underestimate,” Mohammad Zuabir, a Rohingya teacher and community leader who has been a refugee in Bangladesh for 25 years, told AFP.

“Almost every Rohingya family has one or multiple members killed in the violence. When people fled their villages in Rakhine, they saw roads and homes littered with dead bodies,” he added.