US President Donald Trump speaks on steel and aluminum tariffs during a meeting with industry leaders in the Cabinet Room of the White House on March 1, 2018 in Washington, DC. / AFP PHOTO / MANDEL NGAN

Donald Trump has been the President of the United States for a short while, and while he has hit some barricades through his presidency, he is finally starting to make some big moves in office. When campaigning to become the President of the United States, a big part of the campaign was President Trump’s work to convince consumers that he felt their pain with regard to economic burdens and overwhelming debts. However, is President Trump capable of solving the growth in consumer debt that we’re seeing across the nation?

What President Trump Has Done To Put More Money In The Pockets Of Consumers
Perhaps one of the biggest moves made by President Trump thus far has surrounded taxes. The Trump Administration tax plan was designed to cut costs for the average American, putting more money in their pockets out of each of their paychecks. So, how much of a tax break was given? Well, that entirely depends on how much money the taxpayer is earning. While those that earn the least saw no reduction in their taxes owed, everyone else is seeing savings. The chart below, provided by The Balance is a great indication of the savings based on the amount of money earned by the taxpayer: 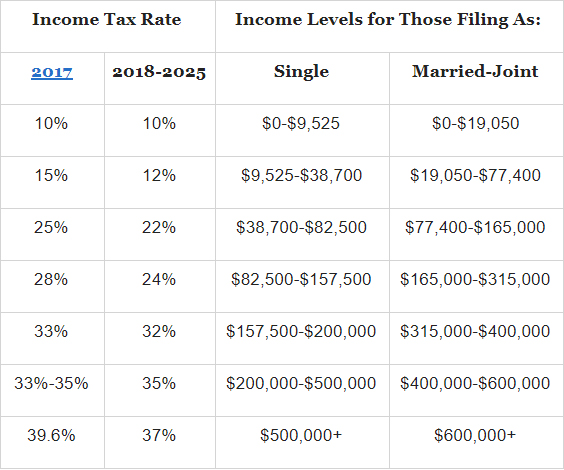 Other than the move to reform income tax in the United States, President Donald Trump hasn’t done much that directly reflects to more money being put in the average consumers’ pocket. Nonetheless, the lower tax burden that consumers in the United States will experience should help to work off debt… or will it?

Will Lower Tax Costs Equate To Lower Consumer Debt In The United States
At first glance, one may think that lower tax burdens placed on consumers as a result of the Trump tax plan will help to reduce debt. However, that’s not what the tax cuts were designed to do, nor do I believe that this will be the end result.

At the end of the day, the lower tax rates are aimed at economic improvement. The idea here is that through the savings they see on tax costs, consumers will start to spend more money. With consumer spending being a primary source of growth in the United States economy, this would help to lift the economy, putting the United States on a path of strength.

However, that’s not necessarily a good thing for credit card debt. With a slight boost in cash, consumers naturally feel that their spending power is stronger. The only problem is that those who are in the habit of overusing credit cards feel a safety net and will likely spend more money. In fact, while economic improvement has been seen in the United States for several years, credit card debt delinquencies are on the rise. So, while consumers are saving some money in taxes, chances are that those that overuse credit cards will continue to do so, and with the money they save on taxes, they may even do so at a higher rate.

Final Thoughts
At the end of the day, we don’t know what the Trump economy will hold in the years ahead. Nonetheless, it has led to slightly more money in the pockets of taxpayers, and that’s always a positive. Nonetheless, it’s important that we keep in mind the fact that the consumer debt crisis in the United States is a real and growing issue, and that thus far little has been done to combat the issue. Only time will tell whether or not the Trump administration has an answer to the consumer debt crisis, but as of yet, it seems as though it does not.