Almost a week of deadly protests in Iran 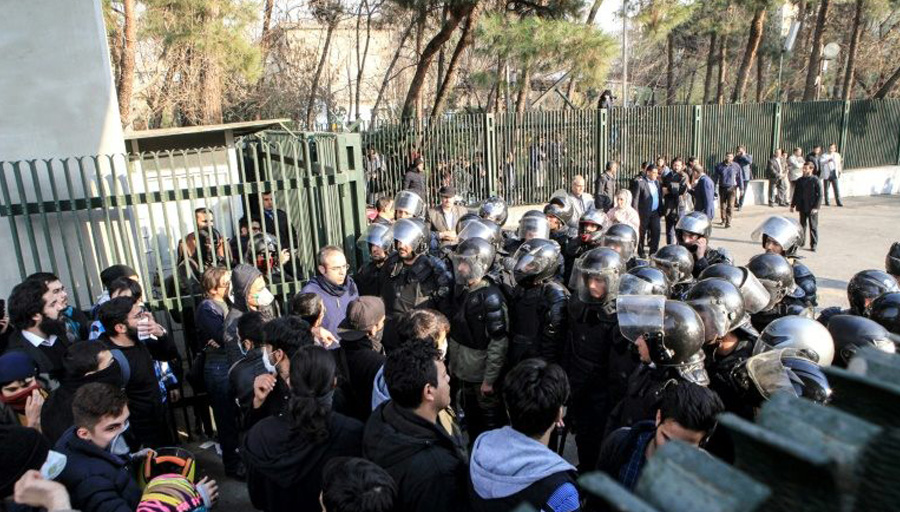 AFP/File / STR Students scuffle with police at the University of Tehran during a demonstration driven by anger over economic problems in the Iranian capital.

Violent demonstrations have rocked Iran since Thursday last week leaving at least 21 people dead, with protests that started over the economy turning against the Islamic regime as a whole.

The wave of demonstrations, that kicked off in second city Mashhad on December 28 and quickly spread, is the biggest in the tightly controlled country since unrest over a disputed election in 2009.

Here is a summary:

First demonstrations
A few hundred demonstrators gather in Mashhad and several other towns on December 28 to protest high living costs after a call reportedly goes out on the Telegram social messaging service.

Videos on reformist media show protesters focusing their ire on President Hassan Rouhani but there are also slogans lambasting the entire regime and Iran’s involvement in conflicts around the Middle East.

Protests spread
The next day larger-scale protests flare up in more cities including the western Kermanshah and religious centre Qom, where footage shows hundreds of demonstrators chanting “Death to the dictator” and “Free political prisoners”.

First Vice President Eshaq Jahangiri suggests hardline opponents of Rouhani’s government may be behind the demonstrations.

Warnings, violence, marches
On December 30, regime supporters rally around the country for officially sanctioned demonstrations to commemorate the defeat of the 2009 protest movement.

But the protests grow. In Tehran, scuffles break out and videos show demonstrators attacking a town hall, overturning a police car and burning the Iranian flag.

10 die in one night
On December 31, the authorities issue more warnings and officials say 200 people were arrested during the demonstrations in Tehran and another 80 in Arak, some 300 kilometres (190 miles) away.

In a bid to stall further demonstrations, the authorities block access to online messaging services, including Telegram.

Rouhani insists people are “absolutely free” to express their anger but “criticism is different to violence and destroying public property”.

But the unrest continues as videos on social media show demonstrations hitting areas across the country for a fourth night.

Iranian media and officials report 10 people died in protests overnight Sunday to Monday in different areas in the west of the country.

In a second statement on January 1, Rouhani plays down the protests as “nothing” and insists the Iranian people will “respond to rioters and lawbreakers”.

US President Donald Trump says it is “time for change” in Iran.

As fresh protests break out in Tehran at nightfall Monday, state television says a policeman had been killed and three others wounded by fire from hunting rifles in the central city of Najafabad.

Six died in the town of Qahderijan, in the central province of Isfahan, where protesters had tried to storm a police station, the state broadcaster reports.

‘Enemies’
Supreme leader Ayatollah Ali Khamenei breaks his silence, saying on January 2 that Iran’s “enemies have united and are using all their means” against the regime.

The United Nations says it expects “the rights to peaceful assembly and expression of the Iranian people will be respected” and the United States demands Iran end social media blocks.

US envoy Nikki Haley calls for emergency sessions on Iran at the UN Security Council and the Geneva-based UN Human Rights Commission.

The French president calls for “restraint and appeasement”.

Pro-regime defiance
On January 3, after few reports of anti-regime protests overnight, tens of thousands gather across the country in a massive show of strength for the regime.

Chants of “Leader, we are ready” are heard as images show thousands rallying in the cities of Ahvaz, Kermanshah, Gorgan, and elsewhere.

In a telephone call, Rouhani tells his Turkish counterpart Recep Tayyip Erdogan the protests will end in a few days.