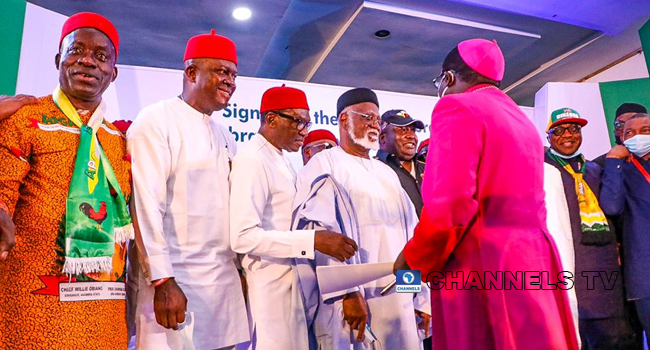 Former Head of State, Abdulsalami Abubakar,  has urged the candidates in Saturday’s governorship election in Anambra, political leaders and residents to commit themselves to peace.

Abubakar made the appeal on Thursday in Awka at the signing of the peace accord by the gubernatorial candidates.

The event was organised by the National Peace Committee, NPC.

Mr Abubakar, who is also the Chairman of the peace committee, said the accord was important considering the history of electoral violence in the country.

“In Nigeria, almost every election has been accompanied by violent ballot box snatching, vote buying, outright disruption of the process and in some cases the intimidation of ordinary citizens who simply want to select a leader who will govern them.

“We, the members of the National Peace Committee have come to Anambra to support a peaceful electoral process.

“We cherish Anambra and we cherish the peace and unity of Nigeria. Most importantly, we want to contribute our own quota to see that the governorship election in Anambra is devoid of violence.

“The signing of the peace accord today (Thursday) is not a mere exercise, it is indeed a clarion call for all the candidates, the political parties and all people of Anambra to commit themselves to a peaceful process.

“We call on all the candidates, political parties and their supporters to accept the outcome of the poll, as long as it is adjudged to be free, fair and credible.

“I have been assured by the chairman of INEC that all efforts are in place to ensure a free and fair election.

“All of us have the responsibility to deepen the cause of democracy in every part of Nigeria.

“We want every Nigerian to begin to enjoy the fruits of democracy, this can only happen when there is peace and stability,” Abubakar said.

He expressed the hope that everyone in the state would play be the rule to ensure peace.

In his remarks, the Chairman, Independent National Electoral Commission (INEC), Prof. Mahmood Yakubu, said that without peace the innovations introduced by INEC for credible elections would be undermined.

Yakubu said that there was a need for every stakeholder to play by the rule to achieve a successful and peaceful election on Saturday.

“INEC has done everything possible to ensure credible election in Anambra under very challenging circumstances.

“I will like to appeal to all parties, candidates and other actors to play their roles in support of the peace accord.

`Without peace our deployment plans, innovations on voters accreditation, result management, the safety of election duty personnel and materials, security of all accredited observers and ultimately the credibility of the polls would be undermined.

“That is why you must all support this peace accord in particular and the work of the National Peace Committee in general.

“Those who signed the peace accord should abide by its letters and spirit,” Yakubu said.

He expressed optimism that the election would be peaceful and the outcome would represent the will of the people, as it was in Edo and Ondo States governorship elections in 2020.

“We believe that Anambra cannot be different from Edo, and Ondo States.

“For this reason, we are also confident that just like Edo and Ondo States the election on Saturday will be peaceful and the outcome will reflect the will of the Anambra voters,” Yakubu said.

The Inspection-General of Police, Usman Baba,  urged the people of Anambra to demonstrate the peace, industriousness and hard work they were known for.

Baba, represented by the Deputy Inspector General of Police (DIG) in charge of South-East, Joseph Egbunike, said it would be a surprise to Nigerians if the people of Anambra failed to uphold the standards that had been laid in the country.

He pledged that the police and other security personnel deployed for the election would be professional in the discharge of their duties.

He, however, warned that anybody that wanted to disrupt the peace of the state would be dealt with.

“We have all agreed that we need peace. Do not allow the peace of Anambra to be changed,” he said.

The News Agency of Nigeria reports that leaders of the 18 political parties and their candidates participating in the election thereafter signed the peace accord.