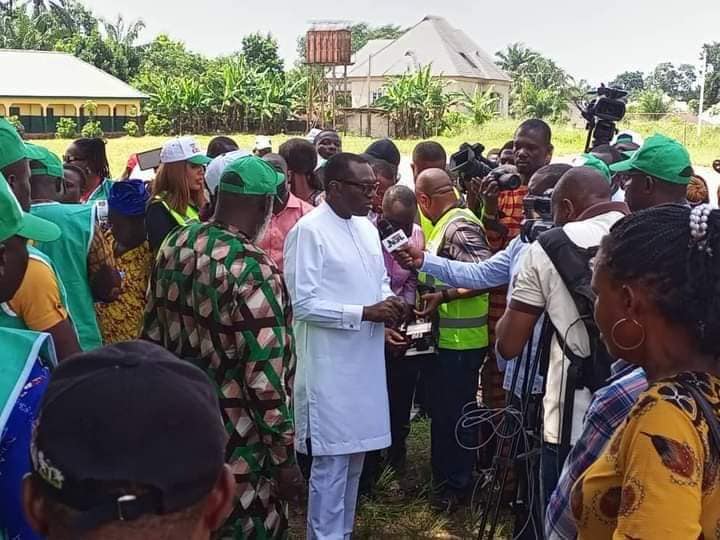 Andy Uba, Anambra Governorship candidate of the All Progressive Congress, APC, has commended the country’s electoral umpire on the smooth conduct of the ongoing election in Anambra state.

Mr Uba made the commendation during a press interview in Uga, Aguata Local Government Area of Anambra, on Saturday when he arrived his Uga Ward 1 to cast his vote at polling unit 17.

He expressed satisfaction with the voters presence at the ward and encouraged the voters to vote out non performing political party.

Mr Uba urged voters who are yet to come out to do so to vote for their choice candidate.

Peter Ezenwajiaku, a voter, said that he got to the polling point as early as7:am and had to wait till officials arrived about 8.40am.

Mr Ezenwajiaku said that the delay in time scheduled for the election by the officer of the election team was not a good one and hoped that the time lost would be extended for the voters to vote.

He said it was impressive to see the election move on well with the peaceful manner that voters had conducted themselves at the moment and prayed that it would end peacefully.

Linus Egbunine, a party agent for the APC, said that the election process is moving on very well as the fear of attack has been overruled with the presence of security officers.

Mr Egbunine said that he was happy that people came out to vote despite all the fears entertained before now and hoped that other voters still at home will brave it and come out to vote.

Pius Ezegbo, a party agent of the All Progressive Grand Alliance APGA, said that voters are not much at the moment but believe that with time more people may come out.

Mrs Favour Okeke, a voter, said that she was yet to vote because the machine in 018 did not recognize her so she was asked to wait till the technician arrives to sort out the challenges.

Nwagbueze Okafor said that people are out in their numbers to vote but the accreditation is very slow and hope it would restored soon.

He said to vote is his civic duty and that he would use this time to support good governance through his vote.

Nwakego Offor said that everyone is patiently waiting for the machine to be fast in attending to the voters before the voting time laps by 2.30pm.

A polling officer, who did not want to mention his name, disclosed that 560 voters were registered in the ward.