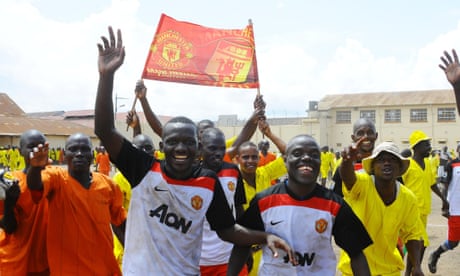 The football competition was organised in collaboration with Nuga Best International a non-governmental organisation, as well as Seman, Regis Integrated among others.

While declaring the competition open, the Controller of Corrections FCT Command, Abdul-Rahman Maiyaki, said the football competition was one of the reformative programme designed for inmates at the correctional facilities.

Mr Maiyaki said the tournament was designed with a view to helping the inmates build up the physical and emotional well being.

According to him, what is happening is not something new because sporting activity is one of the programmes that we use for reformative programme in our correctional facility.

“What we intend to achieve is that the inmates will be able to build up their outlook, their health and as well help them to have positive spirit for the future ahead.

“Sport helps in remolding their mental attitude, to know how to approach and think about the happenings around them.

“When they play this football, some of them go back to the cell, sleep and have enough rest and that will make them to forget about all negative thoughts,” he said.

Mr Maiyaki commended the NGOs for sponsoring the program and many other support they had continued to provide for the inmates in the various Correctional facilities.

He disclosed that NCoS had set up an NGO parliament where they rubbed minds with the inmates, ex-offenders known as return citizens and staff to attend to reformative programmes.

The controller called for more support in the area of education, vocational training and job placement when the inmates leaved the facility.

He also called on the government to create special job slots for returned citizens (ex-inmates) to ensure that there were not discriminated against during job placement.

According to him, there are a good number of inmates with good degree qualifications and other talents that should be encouraged.

The Founder of Nuga Best International, Pastor Hillary Chukwuma, said that he had developed interest in organising sports for the inmates to let them know that they had people that still love them.

Mr Chukwuma said the NGO had been collaborating with NCoS for over 17 years to support inmates and also rehabilitate ex-inmates, saying that a lot ex-inmates had been rehabilitated to become responsible citizens.

He said that several of them had become pastors and other important persons in the society through the activities of the NGO.

“The most important thing is after they come out because a lot of people still stigmatise them and so we try to bring the closer to the people.

“I have more than 10 pastors that came out from here and some of them are also doing very well in their businesses and homes,” he said.

Also the Chairman, Regis Integrated Services Limited, Adamu Turaki, said his organisation decided to partner in sponsoring the tournament as part of its corporate social responsibility to the less privileged members of the society.

Mr Turaki said he saw the partnership as an opportunity for the organisation to contribute its quota in reforming the inmates and give them hope of a better tomorrow.

He said that a lot of young people who found themselves in the correctional facility were people with potentials and talents to become anything they would want to become.

He urged youths to always shun crimes and thread the path of honour, saying there was not short cut to greatness.

The Chairman/CEO, Seman Group, Stephen Nweze, said the tournament was meant to uplift the spirit of the inmates and to also encourage them that they had better lives ahead of them.

Nweze urged the government and the society not to treat ex-inmates with dishonour by giving them opportunity to prove themselves in the society.