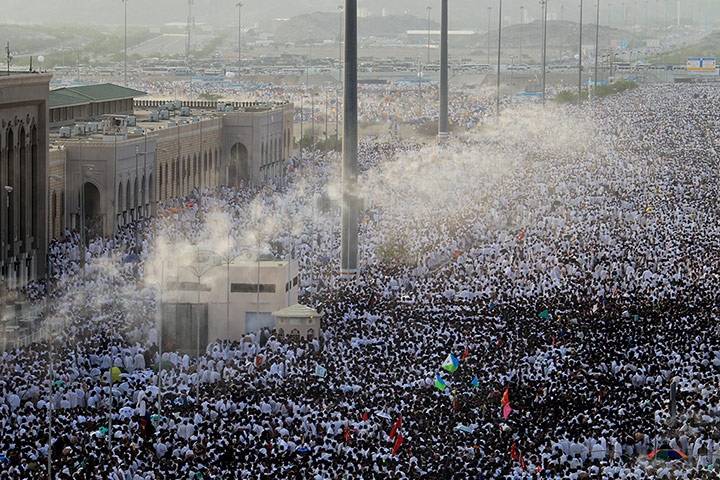 Rayyan Alhassan from Makkahhttps://dailynigerian.com/author/rayyan/
Rayyan Alhassan is a 30-year-old graduate of Journalism and Mass Communication at Sikkim Manipal University, Ghana. He is the acting Managing Editor at the Daily Nigerian newspaper, a position he has held for the past 3 years. He can be reached via [email protected], or www.facebook.com/RayyanAlhassan, or @Rayyan88 on Twitter.

The chairman of the National Hajj Commission of Nigeria, NAHCON, Abdullahi Mukhtar on Friday disclosed that the Saudi government has constructed a new road and allocated it for the sole use of Nigerian pilgrims during the Hajj exercise in the kingdom.

DAILY NIGERIAN reports that 2019 Hajj rites have begun since the midnight of Thursday, August 8.

Mr Muktar, who stated this while addressing stakeholders at a pre-Arafat dinner, said the newly constructed road leads directly from Nigeria’s tents area in Mina all the way to Jamarat where the symbolic stoning of the devil is done

The chairman commended the Saudi authorities over their special consideration and concessions to ease this year’s Hajj exercise for Nigerian Pilgrims.

He also thanked the Nigerian Embassy, and the Consulate for their untiring, year-in, year-out, cooperation and support for a smooth, hitch free and successful Hajj exercise over the years.

The chairman also noted the extra units of air-conditioning systems deployed by the Saudi government for the use of Nigerian contingents in their tents, saying that no other country has been given similar considerations in this year’s exercise.

While sounding a note of warning to tour operators who may want to cut corners or shortchange Pilgrims under their purview, as there would be sanctions, the acting Chief executive of NAHCON urged them to live up to expectation in diligently giving their pilgrims value for their money.

He called on all stakeholders for more support and cooperation to ensure that this year’s exercise was diligently executed to the satisfaction of all, adding that stakeholders must reciprocate the Kingdom’s gesture by ensuring that Pilgrims conduct themselves in orderly manners in line with laws of the land.

He advised the Ulamaa to guard against scholarly arguments that may be confusing to the ordinary Pilgrim who requires only basic education to perform the Hajj rites.

He said any dereliction of responsibility would be met with the full wrath of the stipulated sanctions in the contracts signed prior to this year’s Hajj operation.

No Hajj seats allocated to Nigeria yet – NAHCON

The National Hajj Commission of Nigeria, NAHCON, says no hajj seats have been allocated to Nigeria for 2021 hajj by the authorities of Saudi Arabia.
Read more
Newsletter

The National Hajj Commission of Nigeria, NAHCON, in collaboration with the Jaiz Bank Plc., has launched the National Hajj Savings Scheme, NHS, in Adamawa, Taraba and Ebonyi states.
Read more