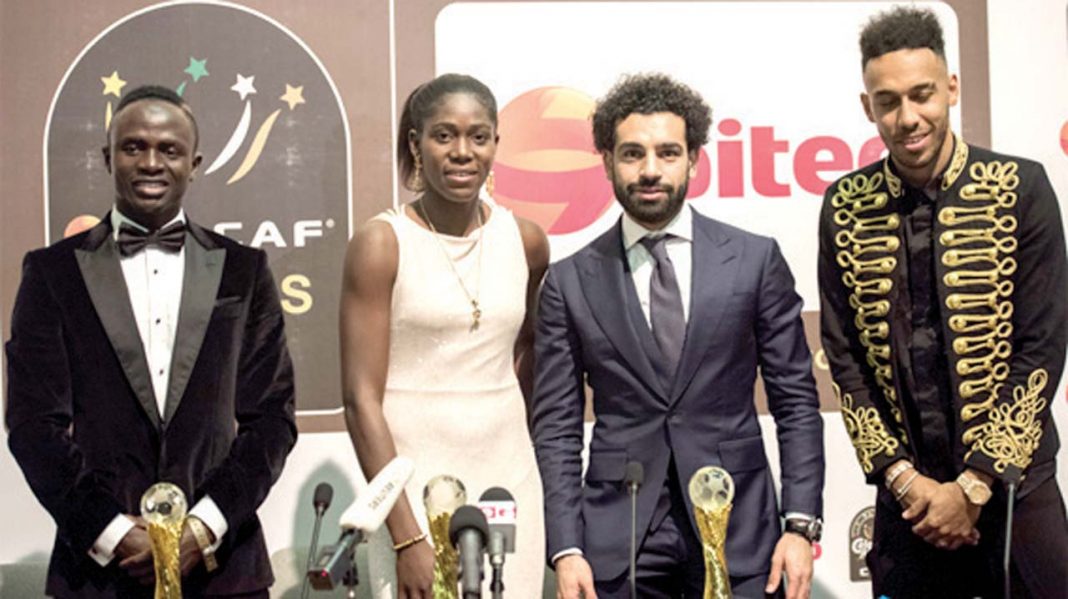 They came in their hundreds from across the continent. Current and past players, who in their time made the continent the envy of others due to the exciting brand of the game played by its teams, were all at the Accra Conference Centre to witness the unveiling of Africa’s current best performers in the game.

Quite unlike in the past editions, the players were given the prime position, with one of the icons, Cote d’Ivoire’s Didier Drogba handling the proceedings alongside South Africa’s entertainer, Carol Shabalala.For the first time in the history of the awards, all the past winners of the awards still alive, including the 1971 winner, Ghana’s Ibrahim Sunday, were there to show that Africa has come of age.

Aside the footballers, Africa’s captains of politics, business, and entertainment were also present to witness what many described as the best African Football Awards in history.The excitement started building outside the hall when the news spread that such luminaries as Morocco’s Mohamed Timoumi, Algeria’s Lakhdar Belloumi, Nigeria’s Victor Ikpeba and Emmanuel Amuneke, who later presented the Coach of the Year award, were within the conference centre.

There were also the best musicians and dancers from across the continent in a blend of music and sports that kept the audience on the edge of their seats throughout the a little more than two hours of the show.This year’s awards was also different in that it was the first time in the history of the event that football fans and the public participated in choosing the African Player of the Year and Africa’s best team.

Former winner of the award, Emmanuel Amuneke echoed the opinion of the footballers present when he said, “this is a special day in the annals of African football. I want to thank CAF for giving the players the opportunity to be here. It is unprecedented and we thank CAF for that.” Amuneke recalled that in the past, footballers were relegated to the background in an event that was supposed to celebrate them.

Cameroun’s Samuel Eto’o Fils, a former serial winner of the award, was also elated that the stars were at last given the opportunity to shine at the event.Eto’o is one of the past winners of the award tipped by many to play prominent roles in future editions of the awards night.

Lagos State Governor, Akinwunmi Ambode, who attended the event with his Information and sports top officials, was also pleasantly surprised by the changes in this year’s awards. “We are very happy with what Aiteo as an institution is doing for Nigerian Football, and that is why we are here to support them, to support the NFF and to support CAF. This has been a spectacular event and it is good for the image of Nigeria.

“This is a clear departure from the past as footballers have been given the opportunity to participate in their event. I commend CAF and the Aiteo Group for putting up such a successful event.”Nigeria Football Federation (NFF) President, Amaju Pinnick also praised the organisers of the awards, saying it met the expectations of the football body.

“This has been a very exciting and colourful night. It has been worthwhile. Everyone, from CAF to Aiteo, is happy about the turn out of the very first Awards that both are involved together and the NFF is also happy,” he said.Vice Chairman of AITEO Group, Benedict Peters, whose company signed a contract with CAF in Lagos in October 2017 as the title sponsor of the awards, bankrolled the event for the first time.

Peters, who was thrilled by its outcome, promised that his company would continue to invest in the development of the continent’s football, adding that they were always looking at ways of developing African youths.

“Africa has always been recognised as a continent with great sporting potential. With our teeming youth shaping today and redefining the future with creativity, passion and innovation, it is important that we collectively continue to provide them with platforms for recognition and inspiration.

“Football has always been a unifying factor and great tool for promoting integration and development. Fort the past 26 years, CAF has consistently recognised distinction in the game, a vision and response that aligns with Aiteo’s values of creating opportunities, healthy competition and respect for hardwork.

“Today, we also celebrate the legends, who have not stopped winning in other aspects of life. Role models and ambassadors of Africa, who inspire others and have set the pace in their pursuit of excellence. We say hearty congratulations to all the winners tonight. By winners, I mean everyone gathered in this room, players or spectators from all over Africa and beyond, who are proud of the game, proud of our champions and of their many successes. We look forward to witnessing more like George Weah, president-elect of Liberia, who demonstrates that leadership can be extended off the pitch to other endeavours of life. The way we conceive the future sculpts the present.”

Also basking in the euphoria of what turned out to be a monumental event, CAF President, Ahmad said it was part of his vision to align African football with the best practices in other parts of the world.He said: “We wish to congratulate one of our legends, George Weah, who is represented her by his wife.

“The event is organized with support from our partners, AITEO, which has promised to help the development of the African game. On behalf of the African football family, I want to thank you for the support you have been given African football.“For the first time in the history of this awards ceremony, the legends of African football played a major role as they turned up in their numbers to grace the occasion.

“For those who were present and for those who could not come, we are grateful and we would like to assure them that we will deepen their contribution to the development of the game in Africa.“Their presence helped to make this event a great success and their enthusiasm and positive spirit helped make our time together very productive.

“For the nominees and award winners, we would like to congratulate all of them as they deserve the recognition they got. We want to encourage them and all the footballers across Africa to work harder this year to continue to hoist the flag of Africa wherever they find themselves.

“We would to thank all clubs that released their players for the event particularly Liverpool Football Club of England for their outspoken show of respect for African football by releasing their top players to attend the event even though they have an important matches few hours after the event in Accra.

“Our sponsors AITEO deserve big commendation as their significant support ensured the fantastic display last night. While praising their efforts we will be seeking an explanation from AITEO over the line-up of musicians for the event.

“We had agreed with them, in pursuit of continental spread of the performers, to ensure a regional balance and a strong local representation of at least two musicians from the host nation Ghana – Kidi and Shatta Wale. However, that did not happen and there is the need for an explanation from them on why that was the case in order to make next year’s event more successful.”

Also eulogising the African game, Ghana’s President, Nana Addo Dankwa Akuffo-Addo described Africans as a people that welcome people to their homes, adding that Ghanaians would continue to support CAF’s activities ‘so that we can produce more Abedi Peles, Rabah Madjers, Roger Millas.
“I am told that unlike in previous editions, we are joined by all the living past winners and all the nominees. We appreciate the changes you have made in the organisation of the awards.

“The nominees are undoubtedly the star performers of African football, who from their performances in the English Premier League and the Bundesliga made Africans proud.“I assure CAF that Ghana will answer its call at any time.”As predicted by followers of the African game, Egypt’s Mohammed Salah and the country’s national team won the best footballer and best team awards.

Salah beat Senegal’s Sadio Mane and Gabon’s Pierre-Emerick Aubameyang to the crown, while Nigeria’s Asisat Oshoala won in the women’s category.
Super Eagles’ Manager, Gernot Rohr, however, lost the Coach of the Year award to Egypt’s Hector Cuper (Coach of Egypt), and Egypt’s Pharaohs, who took the Pharaohs to the final of the 2017 African Nations Cup, as well as ensuring the country returned to the World Cup after 29 years absence.

There were also presidents of CAF’s member associations, a strong team from the Nigeria Football Federation, heavy presence of the Ghana Football Association hierarchy and an elite team from the Lagos State Government were complemented by legends and stars of the African game, CAF secretariat, members of the diplomatic corps, leading artistes and other football stakeholders.