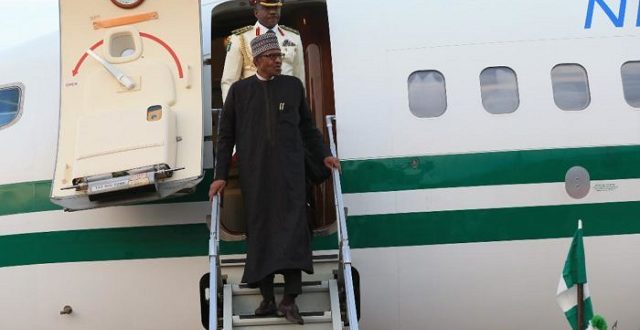 President Muhammadu Buhari has rounded up his official trip in Addis Ababa, Ethiopia and flew back to Nigeria to sympathise with the victims of Auno attack in Maiduguri, Borno State.

Recall that Mr President had been in Ethiopia for an Economic Community of West African States, ECOWAS,  summit.

However, following the Auno attack by the Boko Haram insurgents last Sunday and the attendant reactions by Nigerians, the President had thought it wise to come back into the country to show his respect for the dead ones.

A terse statement by a Presidential spokesman, Garba Shehu, said: 1”2:45pm. President Buhari, aboard the BBJ from Addis Ababa just landed in Maiduguri.

“He is paying a sympathy visit to the government and people of Borno following the recent horrific incident in which BH terrorists killed several travelers.”