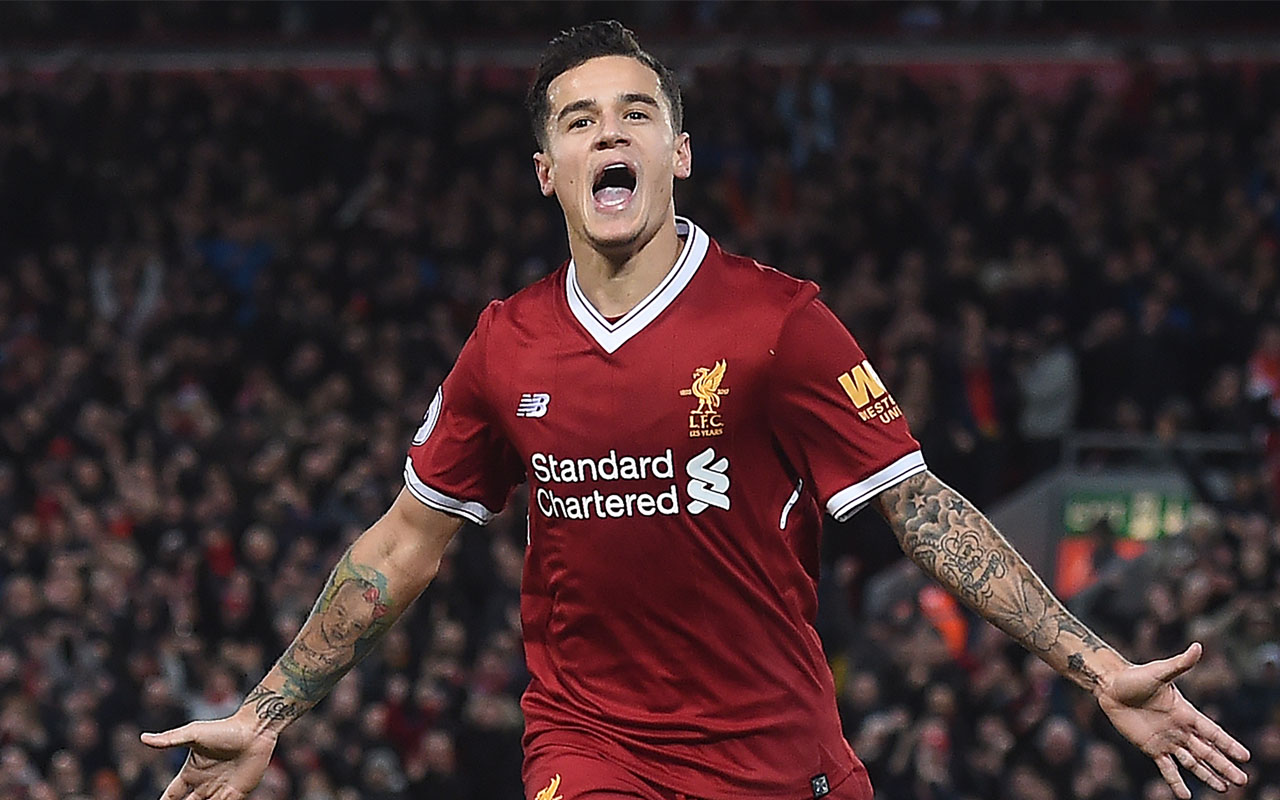 FILES) This file photo taken on December 06, 2017 shows Liverpool’s Brazilian midfielder Philippe Coutinho celebrating scoring the opening goal from the penalty spot during the UEFA Champions League Group E football match between Liverpool and Spartak Moscow at Anfield in Liverpool, north-west England on December 6, 2017. When Philippe Coutinho joined Liverpool in 2013, the Brazil forward was so lightly regarded that his signing was overshadowed by the arrival of Daniel Sturridge at Anfield earlier that month. But five years later, Coutinho has become such an formidable force that his departure will be mourned by Liverpool fans around the world if Barcelona complete their bid to land the Reds star in a blockbuster transfer. Paul ELLIS / AFP/

Philippe Coutinho finally got his wish on Saturday when Barcelona agreed to sign the Brazilian star from Liverpool for 160 million euros ($192 million) in the third richest deal of all time.

The swoop for the 25-year-old attacking midfielder — which contains a 400 million euro release clause — will be the third biggest deal in football.

Last year, Paris Saint-Germain shelled out a world record 222 million euros to lure Brazilian star Neymar from Barcelona before the French champions then agreed to pay Monaco 120 million euros for Kylian Mbappe in a deal which will be officially activated once the striker’s loan period is completed.

“It is with great reluctance that we -– as a team and club –- prepare to say farewell to a good friend, a wonderful person and a fantastic player in Philippe Coutinho,” Liverpool manager Jurgen Klopp told the club’s official website.

“It is no secret that Philippe has wanted this move to happen since July, when Barcelona first made their interest known.

Rio-born Coutinho arrived at Anfield from Inter Milan for £8.5 million in January 2013 and scored 54 goals for the club in all competitions, although he won no silverware during his five-year stay.

Barcelona had tried to sign him in the summer, but his departure is a blow to Liverpool as the playmaker has just returned to top form after an injury-hit start to the season.

He scored six goals in the last seven games of 2017 to put his side firmly in the Champions League places.

Capturing Coutinho allows Barcelona to move on from the bitter experience of losing his Brazil teammate Neymar last summer.

Coutinho had stayed in Liverpool on Saturday while his teammates jetted off to Dubai for warm-weather training, fuelling speculation that he was set to leave the Premier League club.

He was then photographed giving a thumbs-up as he left London for Spain accompanied by his wife, Aine.

Coutinho is expected to watch his new team host Levante on Sunday afternoon at Camp Nou.

Video posted on the club website showed a locker bearing his name had already been reserved for their new recruit.

Coutinho’s age is highly attractive to Barca, whose three main stars, Lionel Messi, Luis Suarez and Andres Iniesta are all in their thirties. Iniesta, at 33, has shown signs of fatigue this season.

They claimed Mahrez will have a medical at Liverpool on Sunday before penning a four-year contract.

Liverpool have also been strongly linked with Monaco forward Thomas Lemar, who Arsenal tried to sign before the season.

Coutinho played no role in Liverpool’s 2-1 victory over city rivals Everton in the FA Cup on Friday.

“It’s hard to get my head around what Philippe is going to gain because he can’t play Champions League football for them, they are running away with the league, and he’s got the World Cup at the end of the season,” Thompson said on Sky Sports.

“Will he play regularly every week at Barcelona? I’m not too sure. Philippe could have carried on (at Liverpool). He could have been playing in the Champions League.”

Meanwhile, later Saturday, Liverpool said they will offer supporters who bought shirts bearing the name of Coutinho a £50 voucher to help offset the impact of the Brazilian star’s departure.

“The offer follows today’s announcement that Coutinho will join Barcelona and reflects the exceptional circumstances behind the player’s departure,” said the club.

“Supporters should present their 2017-18 Coutinho replica shirt at any official club store where the voucher will be issued…the shirt will not be retained but proof of purchase will be required.”