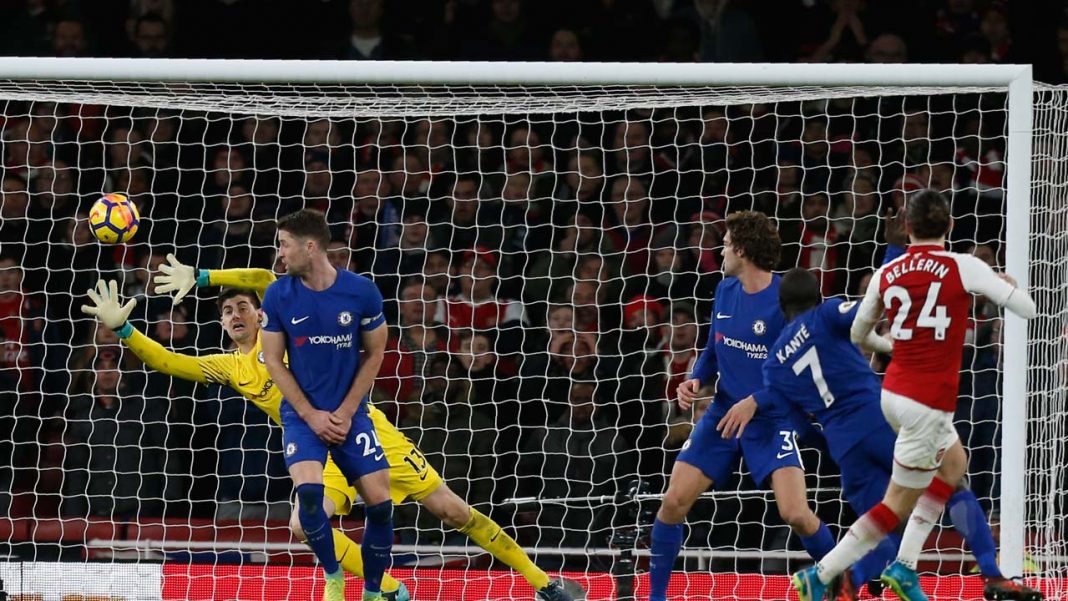 Hector Bellerin came to Arsenal’s rescue as the defender’s last-gasp strike earned a dramatic 2-2 draw in a heated London derby against Chelsea on Wednesday.

Bellerin looked set to be the villain of the piece for Arsenal after the Spaniard’s foul on Eden Hazard conceded a penalty that allowed the Chelsea star to cancel out Jack Wilshere’s opener.

But the 22-year-old enjoyed a sweet moment of redemption in the 90th minute as he lashed in only his second goal of the season.

The frenetic conclusion to a thrilling encounter actually did little for either team’s prospects in the Premier League.

Arsenal, who have now won only once in 13 league meetings with Chelsea, are languishing in sixth place, five points behind fourth placed Liverpool in the battle to qualify for the Champions League.

In an early sign of the drama to come, Alvaro Morata squandered a golden opportunity to put Chelsea ahead when Arsenal defender Calum Chambers completely misjudged a long pass.

Morata pounced on the loose ball and sprinted clear but with only Arsenal goalkeeper Petr Cech to beat, the Spain striker scuffed woefully wide.

Foreshadowing the penalty angst to come for Wenger, Ainsley Maitland-Niles had a spot-kick appeal turned down following Victor Moses’ challenge.

It looked a good decision by referee Anthony Taylor however and there was more frustration for Wenger moments later.

Alexis Sanchez wriggled into position for a powerful shot that Thibaut Courtois pushed onto one post, with the ball rolling agonisingly along the goalline, then hitting the other post before rebounding into the keeper’s arms.

If that was a stroke of luck for Chelsea, there was no fortune about Courtois’s next contribution as he produced a fine save to deny Alexandre Lacazette after the Arsenal forward turned Gary Cahill and unleashed a powerful low strike.

Conspiracies
Cech was called into action twice in quick succession after the interval as he repelled Hazard’s low shot and palmed away Alonso’s header.

Courtois was matching Cech save for save and the Belgian produced another brilliant block to stop Lacazette’s close-range effort.

But the Chelsea keeper was finally beaten in the 63rd minute.

Ozil picked out Rob Holding on the edge of the area and when the defender’s pass was deflected into Wilshere’s path, he reacted instinctively to drive his shot high into the net at Courtois’s near post.

It was Wilshere’s first league goal since May 2015, although he might have been fortune to still be on the pitch after avoiding a second booking for a theatrical tumble just before he scored.

Yet the crucial moment in a pulsating clash came just four minutes later.

As Hazard twisted and turned inside the Arsenal area, Bellerin rashly stuck out a leg to halt his progress and Taylor pointed to the spot.

Hazard stepped up to convert the 67th minute penalty for his ninth Chelsea goal this season.

The Frenchman has already been charged by the Football Association for his angry protests at the weekend, but his expression after the decision suggests another blast is in the offing.

When Alonso timed his run perfectly to meet Davide Zappacosta’s cross with a cool finish in the 84th minute, it seemed certain Chelsea would start 2018 in winning style.

But Bellerin was determined not to end the night as the fall guy and the wing-back pounced on Alonso’s weak header to crash in the equaliser.

Even then there was almost a sting in the tale when Zappacosta smashed against the bar in stoppage-time.