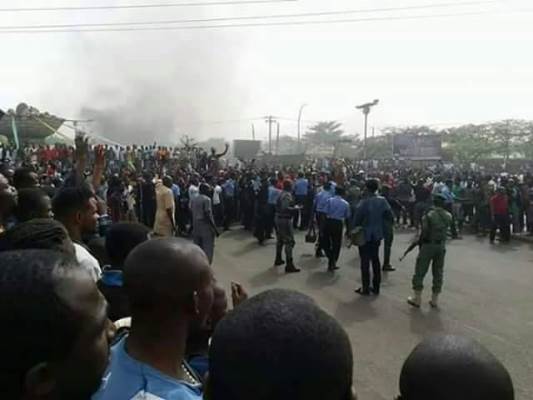 A multitude of youth in Makurdi have trooped out on Wednesday to protest against the January 2, attack on farmers in which 20 people were reported killed.

But the angry were said to have pelted the state governor, Samuel Ortom, who attempted to address them. He was later said to be eased away by his security, BBC Hausa service reported.

The protesters were calling on the presidency to bring the culprits to book.

The protesters carried placards with inscriptions such as “Presidential Intervention needed”, “Why value cows to Humans”, and “Stop this incessant blood bath”.

Some of them chanted, “We will not vote for the present administration again both the State and Federal level if this crises don’t stop”.

The protests involved mostly youths who barricaded major roads leading in and out of Makurdi, the state capital.

The youth have vowed not to leave the streets until the presidency spoke on the killings.

They were also asking government to intervene in the series of other attacks on some rural communities by armed herdsmen.

Terhemen Anum, said residents of Guma and Logo local government areas have yet to determined number of peasant farmers, women, children and the aged inclusive that were killed.

Also Ruth Agba said the killing of Benue farmers, and destruction to their homes and farms was not different from Boko Haram activities in the northeast.

Governor Samuel Ortom of Benue had told journalists on Tuesday that 20 people were killed in the mayhem.

Mr Ortom called on the Federal Government to wade into the matter so as to avert further destruction of lives and property.

Meanwhile, the Police in Benue has confirmed the arrest of eight herdsmen in connection of the New Year Day’s attacks in Guma and Logo Local Governments.

The Police Public Relations Officer in the state, Moses Yamu, said on Wednesday in Makurdi, “eight herdsmen, six in Guma and two in Logo, have been arrested in connection with the attacks”.

He added that the command had made additional deployments to the troubled area to forestall further occurrence and restore confidence of the people.

Mr Yamu stressed the situation in the two local government areas had been brought under control while investigation was on-going.