British board to review Fury licence 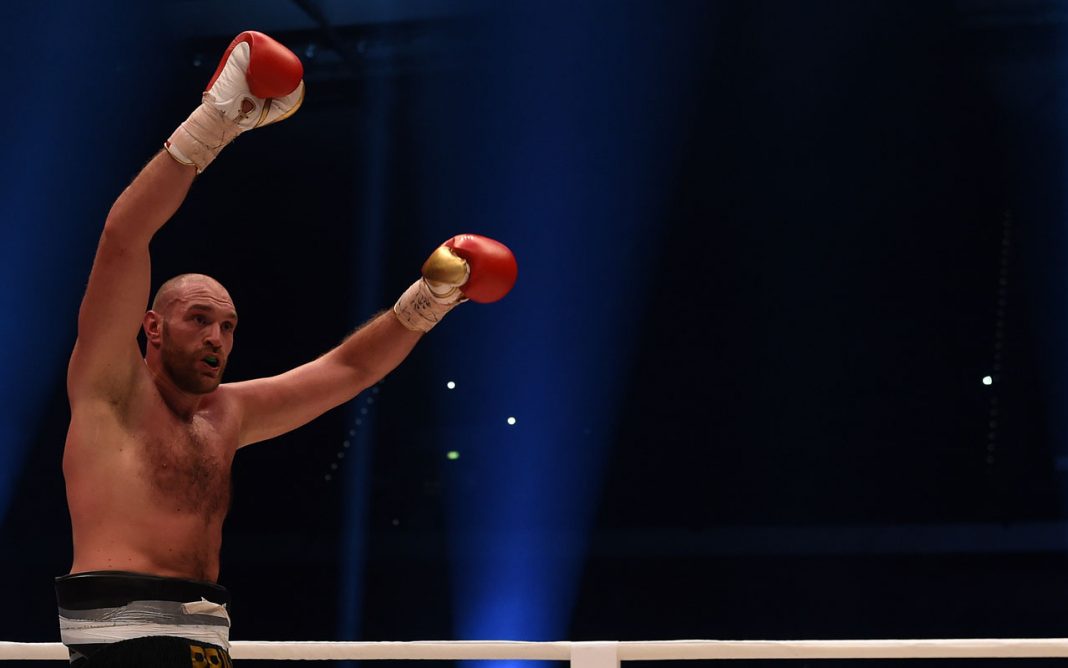 (FILES) This file photo taken on November 28, 2015 shows British Tyson Fury celebrates after the WBA, IBF, WBO and IBO title bout against Ukrainian world heavyweight boxing champion Wladimir Klitschko in Duesseldorf, western Germany. Fury won the fight after 12 Rounds of Boxing. Controversial world heavyweight champion Tyson Fury made an abrupt U-turn on his retirement decision on October 3, 2016, tweeting: “I’m here to stay.” “Hahahaha u think you will get rid of the GYPSYKING that easy!!! I’m here to stay,” Fury wrote on Twitter.he provocative 28-year-old British brawler, dogged by reports he failed a drugs test for cocaine, had earlier declared himself “retired” in a profanity-strewn tweet. / AFP PHOTO / PATRIK STOLLARZ

Tyson Fury could have his boxing licence reinstated when the British Boxing Board of Control (BBBofC) meets next month, a move that would allow the controversial fighter to make a dramatic return to the ring.

UK Anti-Doping (UKAD) has cleared the 29-year-old former world heavyweight champion to return, after an absence of over two years, following his acceptance of a backdated two-year ban over a positive test for a banned steroid.

Fury, who has denied any wrongdoing, has spoken of his desire to “reclaim the world titles which are rightfully mine” but can only box again with the permission of the BBBofC.

“Tyson Fury’s boxing licence suspension will be considered by the stewards of the board in January,” the board said on Wednesday.

Fury, who has not fought since his shock win against Wladimir Klitschko in November 2015 to become the undisputed heavyweight world champion, said he was looking forward to getting back into the ring.

“I’m a fighting man through and through and I’ve never backed down from anyone in my life and I was certainly not going to back down from fighting this dispute,” he said.

Fury immediately laid down a challenge to British compatriot Anthony Joshua, who successfully defended his IBF and WBA titles against Carlos Takam in October.

Fury tweeted: “@anthonyfjoshua where you at boy? I’m coming for you punk ent no1 blocking my path now!”

The boxer had been charged along with his cousin Hughie, who also failed a test for nandrolone in February 2015.

Both have strongly denied the nandrolone charges, saying the positive tests were a result of eating wild boar that had not been castrated.

The British board in a statement said fellow heavyweight Hughie “has no outstanding matters with the BBBofC at this time”, but general secretary Robert Smith said they were yet to hear from the Fury camp.

Before he makes any return, Fury will need to appear before the board so that he can be assessed both physically and mentally.

“We have to be satisfied about Tyson’s physical wellbeing, that he is fit to fight, and that’s not just medically, that’s physically as well,” Smith told Britain’s Press Association.

“It’s well reported he’s not in physical condition to return straight away, so he’s got a bit of work to do.”

Tyson Fury also failed a test for cocaine in September 2016 and later admitted using the recreational drug to deal with depression related to his injury and UKAD problems.