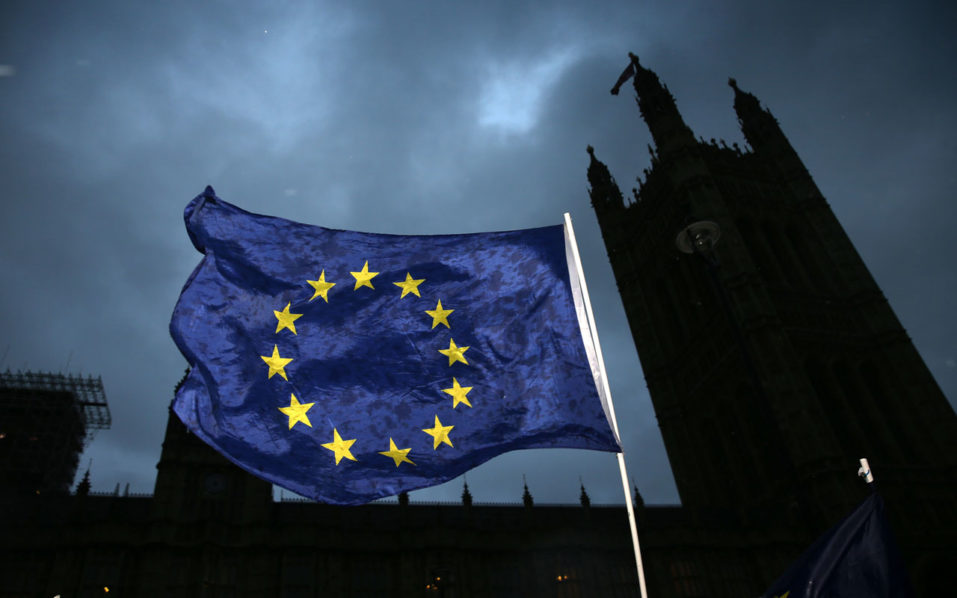 Pro-EU anti-Brexit demonstrators wave an EU flag outside the Houses of Parliament in central London on December 13, 2017 as MPs debate a proposed amendment to the EU Withdrawl Bill. British Prime Minister Theresa May was December 13 facing a rebellion from her own MPs over whether parliament will have a “meaningful vote” on the final Brexit deal in what would be a damaging defeat. / AFP PHOTO / Daniel LEAL-OLIVAS

British Prime Minister Theresa May heads to a Brussels summit Thursday reeling from a parliamentary defeat over Brexit that threatens to undermine her just as EU leaders back the opening of trade talks.

The other 27 leaders are expected during the two-day meeting in Brussels to endorse an interim deal on the terms of Britain’s divorce that May sealed with the EU last week after months of torturous negotiations.

But on the eve of the summit May’s own lawmakers rebelled to demand that parliament have the final say on any Brexit agreement before Britain leaves the European Union on March 29, 2019.

The fresh blow to May’s authority will renew fears in Brussels about her ability to push through a deal and avoid a disorderly Brexit — something EU President Donald Tusk said this week would involve a “furious race against time” to avoid.

Leaders are expected on Friday to give the green light for a second phase of talks covering a post-Brexit transition phase, and future relations between Britain and the EU, including a possible trade deal.

European Commission chief Jean-Claude Juncker recommended the move after all-night talks with May last week, saying Britain had made “sufficient progress” on its divorce bill, the fate of the Irish border, and protections for European expats living in Britain.

– ‘Give and take’ –
May is expected to tell leaders over dinner on Thursday — she will not be at the summit on Friday — that the interim deal “required give and take by both sides, but a fair outcome has been achieved”, a senior British government official said.

The deal was a rare moment of triumph for the British prime minister, who has been struggling to assert her authority since losing her parliamentary majority in a disastrous snap election in June.

But the run-up to the summit has already been marred by a row over suggestions by Brexit minister David Davis that the provisional deal was not legally binding and Britain would not pay its exit bill without a trade deal.

“She will add that she very much welcomes the prospect of moving ahead to the next phase to talk about trade and security, as part of the positive and ambitious future relationship that is in the interests of the UK and the EU, and to reach agreement on an implementation (transition) period as soon as possible,” the official said.

The EU guidelines that leaders will approve on Friday say they will start talks on the transition in January but will not begin discussions on trade until March as it needs more clarity on Britain’s goals, while security and defence will be covered later next year.

Tusk told leaders ahead of the summit that “our unity will be key” in negotiations on Brexit, with the EU still in shock from Britain’s June 2016 vote to become the first ever member state to leave the union.

– ‘Divisive’ migrant quotas –
But that unity will face another stern test on Thursday night when the EU leaders are set to discuss proposals for a way forward on the thorny subject of the migration crisis.

Tensions flared when Tusk wrote in his pre-summit letter that quotas for sharing out refugees around the bloc to ease the burden on frontline states were “ineffective” and “highly divisive”.

Greek Prime Minister Alexis Tsipras, whose country was worst-hit by the crisis, tweeted on the eve of the summit that Tusk’s comments were “aimless, ill-timed and pointless”.

Germany, Sweden and Italy are also big supporters of the mandatory quotas. But eastern European states like Poland, Hungary and the Czech Republic have refused to take in any refugees under the scheme.

A discussion on Friday among the EU 27 about reforms to the euro single currency also threatens to expose divisions.

But leaders are set to show unity on Thursday however by rolling over sanctions against Russia over its involvement in Ukraine for another six months, after an update from French President Emmanuel Macron and German Chancellor Angela Merkel.

They will also discuss US President Donald Trump’s decision to recognise Jerusalem as the capital of Israel, which the EU’s foreign policy chief has spoken out against, although they will probably stop short of issuing a formal statement, officials said.