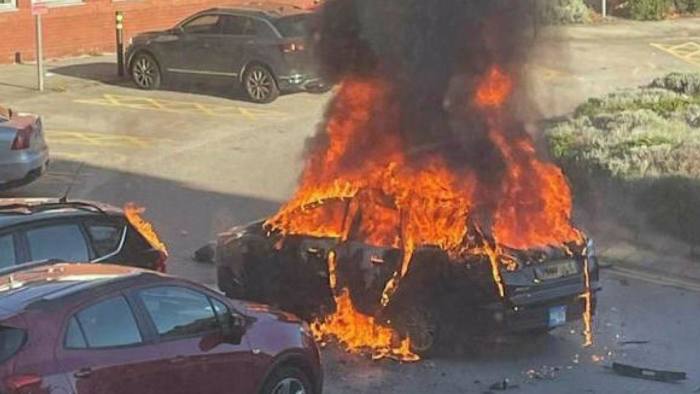 A suspected terrorist who blew himself up outside Liverpool Women’s Hospital at the weekend has been named as 32-year-old Emad Al Swealmeen.

Counter Terrorism Police North West said they “strongly believe” Al Swealmeen was the passenger who died when a taxi exploded shortly before 11 am on Sunday.

They previously said he was picked up in the Rutland Avenue area of the city and asked to be taken to the hospital.

As the car reached the hospital’s passenger drop-off point, it exploded.

Searches are under way at the Rutland Avenue address and a second address in Sutcliffe Street, which officers have said Al Swealmeen previously lived at.

Detective Chief Inspector Andrew Meeks said: “Our inquiries are very much ongoing but at this stage we strongly believe that the deceased is 32-year-old Emad Al Swealmeen.

“Al Swealmeen is connected to both the Rutland Avenue and Sutcliffe Street addresses where searches are still ongoing.

“We believe he lived at the Sutcliffe Street address for some time and had recently rented the Rutland Avenue address.

“Our focus is the Rutland Avenue address where we have continued to recover significant items.

“We continue to appeal for any information about this incident and now that we have released his name any information that the public may have about Al Swealmeen no matter how small may be of great assistance to us.”

Detectives have declared it a terrorist attack but said the motive was unclear.

The UK terror threat level has been raised to severe, meaning a future attack is highly likely.

Four men arrested under terrorism laws in the Kensington area of Liverpool – three aged 21, 26 and 29, who were held on Sunday, and a man aged 20 who was detained on Monday – have now been released from police custody following interview, Counter Terrorism Police North West said on Monday night.

MI5 is assisting police with the investigation.

Assistant Chief Constable Russ Jackson, also from Counter-Terrorism Policing North West, previously told journalists at Merseyside Police headquarters that the “improvised” explosive device had been “manufactured,” adding the force’s assumption was that it was built by the suspect in the taxi.

Official sources previously confirmed to the PA news agency the suspect was not previously known to the security services.

According to reports, Al Swealmeen converted to Christianity after moving to the UK from the Middle East and was later briefly taken in by Christian volunteers Malcolm and Elizabeth Hitchcott in Liverpool.

Speaking to the BBC, Elizabeth Hitchcott said: “We’re just so, so sad. We just loved him, he was a lovely guy.”

Questioned if the couple were shocked by the incident, she added: “Very.”

The driver of the cab, named locally as David Perry, was treated in hospital after fleeing the car just before it burst into flames, and has been discharged.

He was praised by Prime Minister Boris Johnson for behaving with “incredible presence of mind and bravery,” and lauded for his “heroic efforts” by the mayor of Liverpool, Joanne Anderson.

Speaking at a press conference at Downing Street, Johnson said the blast was a “stark reminder” to the public to remain vigilant, adding: “What yesterday showed above all is that the British people will never be cowed by terrorism, we will never give in to those who seek to divide us with senseless acts of violence.

“And our freedoms and our way of life will always prevail.”

He was set to host an emergency Cobra meeting on Monday in response to the incident.

On Monday afternoon a controlled explosion was carried out in Sefton Park “as a precaution” as part of the investigation, police said.

Matthew Heitman, 26, who lives opposite the raided house in Sutcliffe Street, said: “Two of the men were marched out at gunpoint and they had them up against the wall.

“There wasn’t any kind of struggle, they just walked out of the front.

“The people living there had not long moved in, maybe weeks or months.”

Another neighbour, Sharon Cullen, said she thought four men aged about in their 20s lived at the address.

“I don’t know any of them but one of them always seemed to be on a PC in his bedroom,” she said.

Cullen added that she and her husband, 22-year-old daughter and two-year-old grandson were evacuated from their home at about 9:45 pm on Sunday.

“The police pounded on my door and an officer said ‘we need to get you out of the house as soon as possible.’

“They said ‘whatever is going on at the back of the house, it could blow the block.’

“It was really frightening,” she said.

Kathryn Thomson, chief executive of Liverpool Women’s Hospital, said in a statement that the last two days had been “extremely upsetting and traumatising” for people associated with the hospital.

She added that despite security and police on site, services are now running “as close to normal as can be expected.”

Anyone who has any information should call police on 0161 856 1027 quoting Liverpool Women’s Hospital incident.