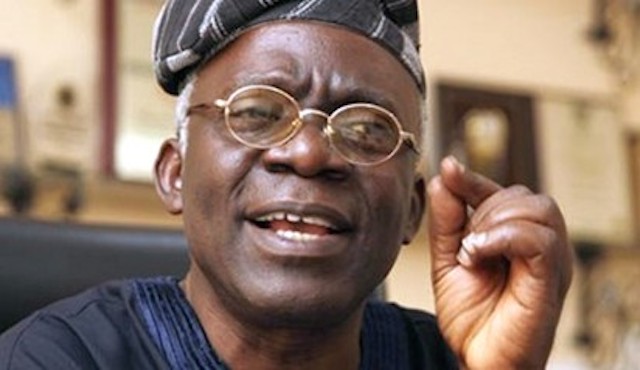 A human rights lawyer, Femi Falana, SAN, has noted that the N10.33 trillion budget presented by president Buhari is not enough to stimulate the rapid development expected by Nigerians.

Mr Falana made the assertion in an interview with a correspondent of the News Agency of Nigeria, NAN, at Imota, near Abeokuta on Sunday.

He told the Nigerian government to embark on a drive to recover Nigeria’s looted wealth to garner resources to fund the 2020 budget.

He said the government must urgently seek other means of generating funds to complement the N10.33 trillion 2020 budget.

According to him, “From the budget breakdown, N2.5 trillion has been earmarked to service debt; about 70 per cent of the balance would go for paying salaries and recurrent expenditure while the remaining 30 per cent will hardly be enough for necessary developmental projects.

“The budget is not sufficient and so the government must look at other areas to generate more wealth for the country and embark on a serious drive to recover looted wealth.”

According to him, there may also be need to increase tax but it should not be now that Nigerians are facing economic hardships.

Mr Falana, however, charged the president and other public office holders to cut down their expenditures, travelling and allowances and divert such money to developing the country.

The legal luminary also advised the government to desist from adopting any policy that could bring suffering to the masses.

He described the recent increment on value-added tax as ill-timed, saying that the interest levied on cash deposits and withdrawals should be cancelled.

Mr Falana said the government could use other means to foster a cashless economy, including placing an embargo on the amount of money to be withdrawn from banks daily, rather than imposing charges.

“The National Assembly by virtue of the constitution would have to look at VAT whether it can be increased or not,” he said.
NAN