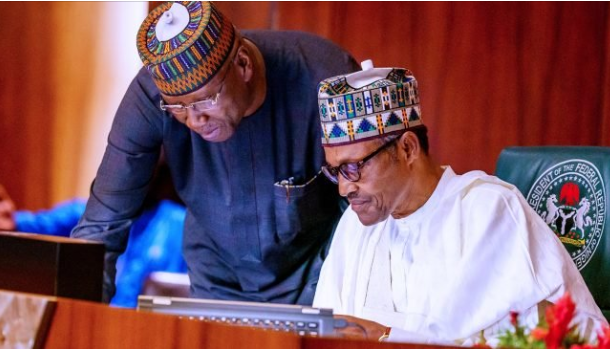 The Secretary to the Government of the Federation, SGF, Boss Mustapha has described the last two years of President Muhammad Buhari’s administration as the most productive and remarkable years of the present administration.

Mr Mustapha made this known in an address on Monday, during the opening ceremony of the Mid-Term Ministerial Performance Review Retreat in Abuja.

“In terms of the performance of the Federal Executive Council, FEC, let me acknowledge that the last two years have been most productive.

“From the above, the 878 Contracts approved by FEC have mostly targeted the provision of infrastructure, geared towards enabling faster economic growth and development, ” SGF explained.

The SGF said the present administration remained focused on its cardinal responsibility of responsively addressing the myriads of needs and challenges of its citizens through the 319 approved policies initiated during the period.

“I am glad to say that with the introduction of the Ministerial Mandates by the President, there is greater clarity of expectations of MDAs on deliverables of government priorities to achieve demonstrable results.

“Today, there are embedded systems for performance management and improved accountability and transparency for the delivery of services to citizens.

“The key focus of this Mid-Term ministerial retreat is to review the status of progress towards the delivery of the nine priority areas.

According to him, the initiative is intended to harness the collective contributions towards generating practicable solutions that will guarantee the level of impact the government functionaries can be proud of by the end of their tenure.

Mustapha stated further that the exercise was also aimed to deepen collaboration and enhance cohesion among cabinet members for efficient and effective service delivery.

The retreat according to him, provides opportunity for government functionaries to collectively assess  performance against the Ministerial Mandates.

He said the retreat was also meant to track the progress of their commitment to deliver the development aspirations captured in the 9 priority areas adopted at the 2019 Presidential Retreat.

The nine priority areas, the News Agency of Nigeria reports are; building a thriving and sustainable economy; enhance social inclusion and reduce poverty; enlarge agricultural output for food security and export; attain energy sufficiency in power and petroleum products and expand transport and other infrastructural development.

Others are expand business growth, entrepreneurship and industrialisation; expand access to quality education, affordable healthcare and productivity of Nigerians; build a system to fight corruption, improve governance and create social cohesion; and improve security for all.