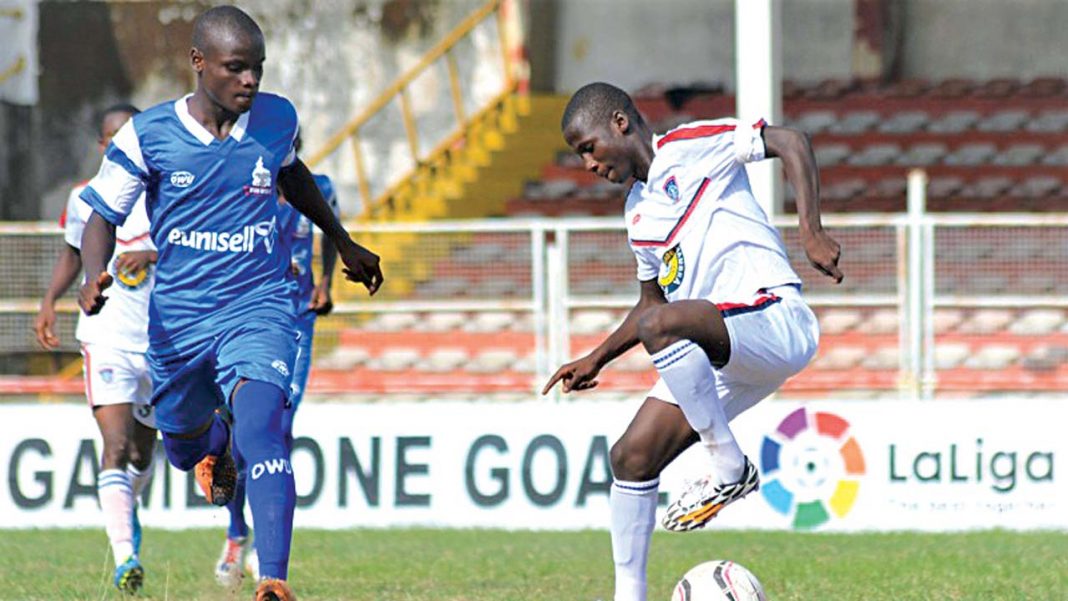 Rivers United held FC IfeanyiUbah to a 1-1 draw in the final game of the owerri zone of the NPFL Promises tournament…at the weekend.

The long-awaited return of the Nigeria Professional Football League is upon us. The 2018 season resumes this weekend across 10 cities. Plateau United will return to defend the title they won last year against all early season permutations. The Jos team confounded many as they matched to the title playing not the most eye-catching football on the equally shabby pitch of the Jos Township Stadium. They were not very pleasing on the eyes but they were effective and also enjoyed some refereeing decisions that kept them on track for their first title ahead of the Agege-based MFM FC who could not conjure a final day miracle despite the exuberant statements of their increasingly flamboyant coach, Fidelis Ilechukwu.

After all the successes and upheavals that the league faced last year, a new year brings with it hopes of creating an improved product that Nigerian fans will increasingly start taking as their own even with the omnipresent onslaught of the glamourous European football leagues. Through television, radio and newspapers, we have become so accustomed to the English Premier League, Spain’s La Liga and the UEFA Champions League, among many others. We are constantly inundated with news from the top European leagues leading to many people losing interest in the local game that thrived in an era not too long ago.

As the NPFL resumes this weekend, one issue, among many others, that I look forward to seeing is the television product on offer. As air is to life so is television to premium sport in this age. Since the first TV broadcast of sport in the United States early in the 20th Century, television has continued to play a huge part in the growth of sport worldwide. While there was fear in the beginning that broadcasting live sport on mass media could lead to low in-stadium attendance, modern sport has continued to grow on the back of exposure on TV and now digital channels while premium sports clubs are expanding their grounds to accommodate more fans.

The NPFL enjoyed its biggest international moment in February 2017 when a goal scored by Sikiru Olatunbosun of MFM went viral globally. The beauty of the Friday night game at the 4000-seater Agege Stadium was captured by SuperSport before it found its way onto social media where it took on a life of its own. It caught the attention of top media companies in England, Italy, Spain, Brazil, France, Japan and more as it went on to become the first NPFL winner of the CNN Goal of the Week contest. If that goal had been scored in an era where there were no TV broadcasts, it would have remained a matter of oral folklore among the crowd in the stadium on that day.

However, midway through the season, SuperSport cancelled its broadcast sponsorship of the NPFL leaving us with nothing to watch for several weeks but returned to show the season run-in and two matches on the final day. While many reasons have been adduced for the cancellation, the LMC did not comment as SuperSport accused it of a breach of contract. However, the fact that SuperSport also ended its broadcast agreement with the Kenyan, Ghanaian and Zimbabwean Premier Leagues in the last year showed a pattern that could be put down to the high cost of producing and broadcasting the leagues. Spending 12million Naira every production day could have led SuperSport to find a loophole to get out of their four-year $34m contract with the NPFL.

So the LMC turned to the NTA, the national broadcaster that had abandoned its role as a veritable producer of live sport events over the years. With expensive equipment lying under-used since the end of the 2009 FIFA U17 World Cup, the NTA has become nothing more than a broadcast house that serves each new government like a faithful lapdog. Its expertise in sports production has gone to waste over the years but the LMC now believes it is the best opportunity to create its own content to sell on to rights owners. Across the world, leagues are turning inwards by creating joint venture production companies as they become content creators. The LMC’s agreement with the NTA is to see the NPFL produced with an opportunity to sell the rights to potential buyers in an increasingly competitive sport TV market.

Is the NTA capable of producing world-class content that can be sold to other broadcasters who are looking to fill their domestic sports quota? The NPFL Super Six Invitational in December was the first opportunity the NTA had to prove itself but visuals were not impressive. Conceived as a test run, the broadcast quality was wanting and it proved that the NTA needs to improve if it is to make a success of the new season. An LMC official did inform me that the Kano broadcast was done with less than half of the proposed equipment and that they hope to get things right when the season commences.

The progress made over the last six years since the LMC came on board needs to be consolidated by a good TV broadcast product in the face of the many other issues that the NPFL faces like poor wages, old stadia, government control of clubs and other issues that are work in progress.