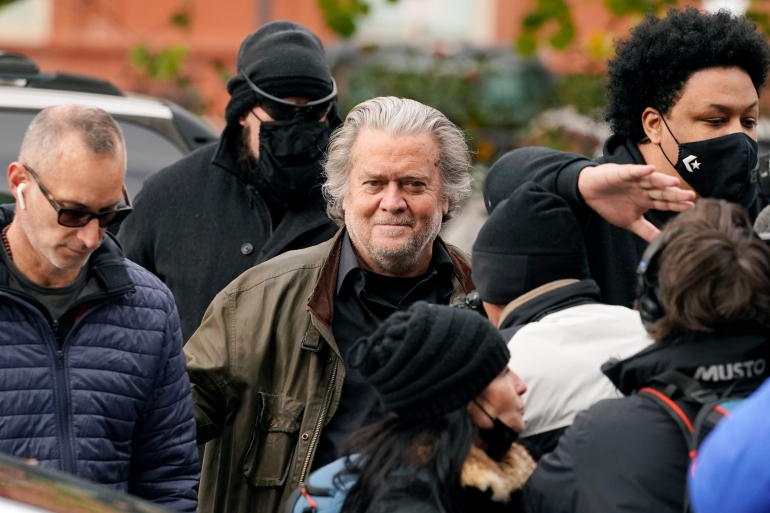 A defiant Steve Bannon, former president Donald Trump’s long-time advisor, turned himself in to the FBI Monday to face charges of contempt of Congress after refusing to testify on the January 6 Capitol assault.

“This is all noise,” he said of his indictment, as he arrived at the FBI’s Washington field office.

“I want you guys to stay focused on the message,” he said, promoting his “War Room” website. “We’re taking down the Biden regime.”

On Friday a federal grand jury indicted Bannon, 67, for refusing to testify or supply documents to the House Select Committee investigating the violent attack on the US Congress by Trump supporters on the day it was to certify Joe Biden as the victor in the November 2020 presidential election.

Investigators think Bannon and other aides and advisors to Trump could have information on links between the White House and the supporters who invaded the Capitol.

Mr Bannon was charged with two counts of contempt, each one carrying a penalty of one month to one year in jail.

The indictment was a significant victory for the House Select Committee, which is battling efforts by Trump to use presidential privilege to block the committee from obtaining testimony and documents necessary for the probe.

“Steve Bannon’s indictment should send a clear message to anyone who thinks they can ignore the Select Committee or try to stonewall our investigation: no one is above the law,” said committee chair Bennie Thompson and vice chair Liz Cheney in a statement.

Mr Bannon is expected to appear in court later Monday for an arraignment and will likely be released on bail.

He was among the first of dozens of people who have been called to testify on the violent attack aimed at shutting down Congress over Trump’s baseless claims that Biden had won the election due to massive voter fraud.

The attack, during which five people died, succeeded in delaying the joint House-Senate election certification session for several hours.