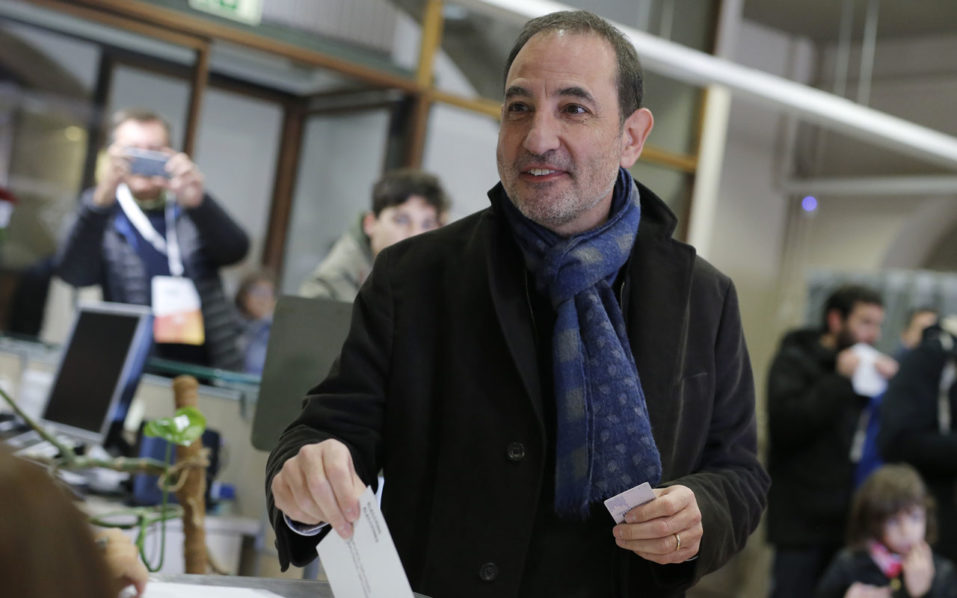 Catalan Parliament member Ramon Espadaler casts his ballot for the Catalan regional election at a polling station in Vic on December 21, 2017. Catalans take their divisions over independence to the polls today in a hotly-contested election that could determine the course of their region just two months after a failed secession bid.
/ AFP PHOTO / Pau Barrena

Catalans began voting Thursday in a decisive election that could mark a turning point for their region, just two months after a failed secession bid triggered Spain’s worst political crisis in decades.

The vote pits leaders of the wealthy northeastern region’s separatist movement against parties that want to remain in Spain, and opinion polls suggest both sides’ leading candidates are neck-and-neck.

Will voters again hand victory to pro-independence parties that tried to break Catalonia from Spain, one of whose candidates is in jail and the other in self-imposed exile in Belgium?

Or will they lose the absolute parliamentary majority of 72 seats they won in 2015 in what would be a stunning upset for the region’s secessionist drive?

At stake is the economy of a region that has seen its tourism sector suffer and more than 3,000 companies move their legal headquarters since Catalan leaders held a banned independence referendum on October 1.

While Catalonia has long been divided over independence, it was the referendum — and a heavy police crackdown on voters — that focused the world’s attention on the region.

After weeks of uncertainty as separatist leaders and Madrid played for time, the crisis came to a head on October 27 when the regional parliament declared unilateral independence.

That was short-lived, though, as Madrid took the unprecedented step of stripping the region of its autonomy, sacking its government, dissolving its parliament and calling snap elections.

‘A date with history’
Axed Catalan president Carles Puigdemont fled to Belgium, avoiding detention on charges of rebellion, sedition and misuse of public funds for his role in the independence drive.

He has since campaigned virtually, holding rallies via videolink.

His deputy Oriol Junqueras remained in Spain and was jailed along with others pending an investigation into the same charges.

Allowed just 10 phone calls a week, Junqueras has conducted a surreal campaign, sending out messages and even poems to supporters from behind bars.

Opinion polls suggest his leftist ERC party could win, and independence supporters in general are rallying to the cause, some of them wearing yellow, the colour of those protesting against the detention of separatists.

“If a leader is removed, another takes their place,” said Marc Botey, a 47-year-old musician who will vote for ERC, stressing the independence drive would go on regardless who their leader was.

Over on the other side, the centrist, anti-independence Ciudadanos party is close to ERC according to polls and some suggest it could win under Ines Arrimadas, a charismatic 36-year-old.

“We have a date with history, these elections will be remembered,” she told a cheering crowd in Barcelona to close the campaign Tuesday.

Barcelona footballer Gerard Pique, a Catalan, tweeted Wednesday: “Sleep well, rest up. The future is in our hands.”

No clear winner
Record turnout is expected, and even before the polling stations opened in Barcelona, people had formed long queues to cast their ballots before heading to work.

But whatever the result, voters and analysts predict no single party will win a decisive majority, which will force negotiations to form a government.

Both camps consist of three parties that may struggle to join forces — Puigdemont’s Together for Catalonia list, ERC and the far-left CUP party for independence, and Ciudadanos, the Socialists and Prime Minister Mariano Rajoy’s Popular Party against it.

In between is the leftist Catalunya en Comu-Podem grouping, which is against independence but supports holding a legal referendum and could play the role of kingmaker.

In an election expected to be painstakingly close, Spanish daily El Pais wrote that of the 5.5 million registered voters, the final result may be in the hands of “a million undecided voters”.

According to Catalan daily La Vanguardia, “independence (parties) only need to win 45 percent of the votes in order to preserve their majority”.

But crucially, even if the pro-independence camp wins, it is not expected to attempt another breakaway from Spain but rather try to enter into negotiations with Madrid.