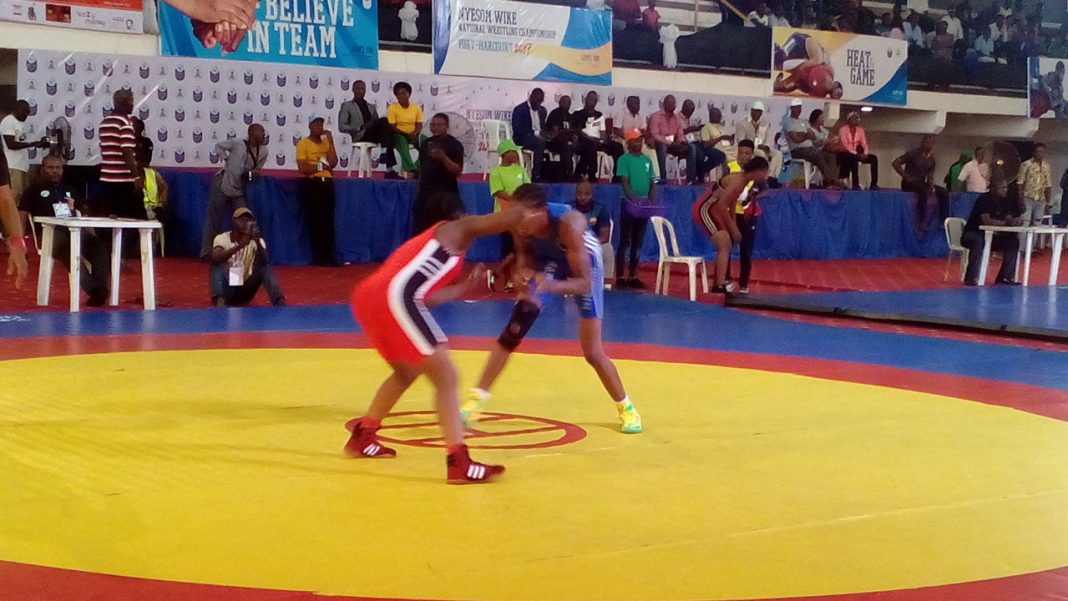 These are exciting times for wrestling in Nigeria. It gets nowhere near the traction or airplay that football does, but it was revealing just how much plaudits it received at the Nigeria Sports Awards this year.

Odunayo Adekuroye, who won gold at the 2014 Commonwealth Games and silver at the World Wrestling Championships this year in France, was named Sportswoman of the Year, as well as Wrestler of the Year for her sterling achievements.

At the heart of it is Federation president Daniel Igali, a highly decorated wrestler in his active years representing Canada. The entire idea of “giving back” can often be reduced to a cliché, but Igali returned to his home nation determined to make a difference, and the results have been staggering.

Even more so is the fact that, by his admission, Nigeria could be doing even better. Logic itself would infer that, with greater investment, comes greater return. However, the proof here is more tangible; at the recently concluded Commonwealth Championships in Brakpan, South Africa, Nigeria put forward five wrestlers, rather than the 12 originally intended.

The issue, ostensibly, revolves around funding. Being starved of attention and the limelight, there is an inevitable lack of sponsorship channels. Igali himself, who had the business class option, flew economy along with his athletes to South Africa, a flight I also happened to board.Of the five athletes who did eventually make the trip to South Africa, four got on the podium: Kemeasuodei Dressman won gold in the 76kg category, Gofit Winnie and Blessing Oborodudu won silver in the 72kg and 68kg categories, while Aminat Adeniyi won bronze at 62kg.

“We didn’t have money for the competition,” he told the BBC.”It was a struggle to get there, so I’m really happy with the performances and results we have so far.”We can do more, maybe due to circumstances. Some of the things we planned didn’t come off. We hope that, at the Commonwealth Games, some of those silver and bronze medals will be upgraded to gold.”

Four of five is a prolific return, and would seem to back up Igali’s conviction that he has potentially two medal prospects in every weight category. What they do need, though, is support and elite competition, as Adeniyi, who won bronze in Brakpan, points out.”We are really happy we went. If we hadn’t, we wouldn’t have been exposed. There were a lot of challenges that might have prevented it. Thank God for our president (Igali) who made sure we attended. It was great.

“We need exposure. We need to go to competitions, so we can build that competitive mentality. That’s all we need: encouragement from the government and the private sector.”Being what it is, elite level sport demands athletes constantly pit themselves against their peers from around the world. Wrestling in particular is evolving constantly: there are new techniques being used all the time, fresh methods, and one can easily be made to look dated in his/her approach.

It captures perfectly why Igali has put in the level of sacrifice he has into making sure these athletes get their skills honed. I asked him once why, being a Canadian Olympic gold medallist, he opted to come and answer Nigeria’s call. He told me Canada has an abundance of people just like him, but in Nigeria, there is no one.Nigeria has not traditionally been a force in wrestling, but with Igali at the helm, and with a determination and eagerness to make a mark that he exudes, that looks set to change.

In order for this to happen, it may be best to focus on quality rather than quantity. Igali has shown the way by quickly identifying the medal prospects and going to bat for them. We may never get over the constant need for funding, and even though this column has called attention to that severally, that is not the intent of this particular piece. What we can do, however, is to be strategic in apportioning what we do get.

What this piece aims to do is to celebrate the humility, sacrifice and commitment that has gone into making us a competitive force in wrestling, and which ought to serve as an example and a challenge to everyone. It is no coincidence that Igali was also named ‘Administrator of the Year’ at the aforementioned Nigeria Sports Awards. He who is faithful in little is faithful in much.