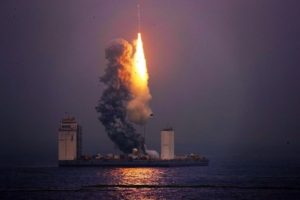 The China Aerospace Science and Technology Corporation, CASC, said this on Tuesday in Beijing.

Earlier in September, the Jilin-1 Gaofen 02C remote-sensing satellite on board a Chinese-made Kuaizhou-1A carrier rocket failed to enter orbit after launch.

An investigation has begun to identify the cause of the failure.

According to the CASC, the Long March-11 rocket was launched at 01:23 GMT on Tuesday from a sea-based platform in the Yellow Sea.

About thirteen minutes later, after travelling 535 kilometers, it has deployed nine Jilin 1 high-resolution Earth-observation satellites, three to take videos and six to take photographs in sun-synchronous orbits, the report said.

Each of the satellites, developed by Changguang Satellite Technology in Changchun, Jilin province, weighs about 42 kgs.

They will provide remote-sensing services to users in fields such as agriculture, forestry, land resources and environmental protection, the report said.