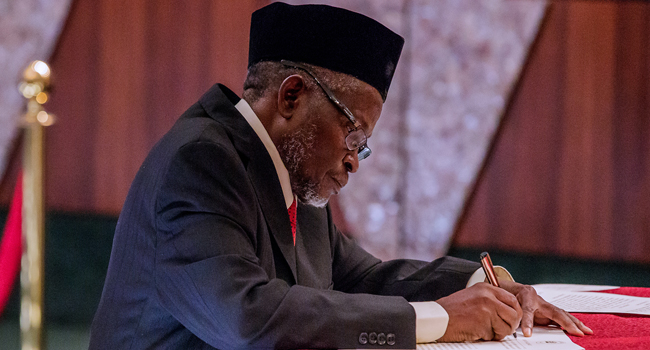 The Chief Justice of Nigeria, CJN, Justice Tanko Muhammad has urged the new Chief Judge of the Federal Capital Territory, FCT, High Court, Justice Husseini Baba-Yusuf to be impartial, fair to all, and apply justice and equity in all his undertakings.

Muhammad made the call during the swearing-in of Baba-Yusuf as the chief judge of the FCT on Tuesday.

“As head of court, your burden becomes heavier, you should, therefore, take charge and ensure that you are just and fair to your brother Judges, the management, staff, and most importantly to the litigants.

He added that administration of justice is the bedrock of not only democratic or civilized societies, but also extends beyond the borders of civilised nations.

“No society can afford to discard administration of justice. There is no regime in any country that can operate without a judiciary.

“No matter how primitive a society is, it must have its own mechanism for resolution of its disputes. Otherwise, that society will drift into anarchy, self-destruction and extinction’’.

He advised judiciary officers to not only do self-assessment but also self-cleansing.

“All hands must, therefore, be on deck from both the Bar and the Bench to rid the legal profession of bad eggs.

“In recent times, I had cause, in a number of occasions to warn Judges to desist from engaging themselves in unwholesome practices that will erode public confidence in the administration of justice.

“The rising number of cases filed in all our courts is a pointer that Nigerians have confidence in the justice system, therefore, the Bar and the Bench must guard that confidence jealously.

“The legal profession is the building under which we are sheltered: if we fold our hands and watch others destroy it or we participate in the destruction, it will collapse on us. We will then have no roof over our heads,’’ he concluded.

Salisu Garba, the former FCT CJ resigned voluntarily to enable him to take up the position of administrator of the National Judicial Institute, NJI.

Mr Garba was appointed acting CJ of the FCT high court in January, after his nomination by President Muhammadu Buhari.

In April, his nomination as substantive chief judge was confirmed by the Senate and he was subsequently sworn in on July 7.