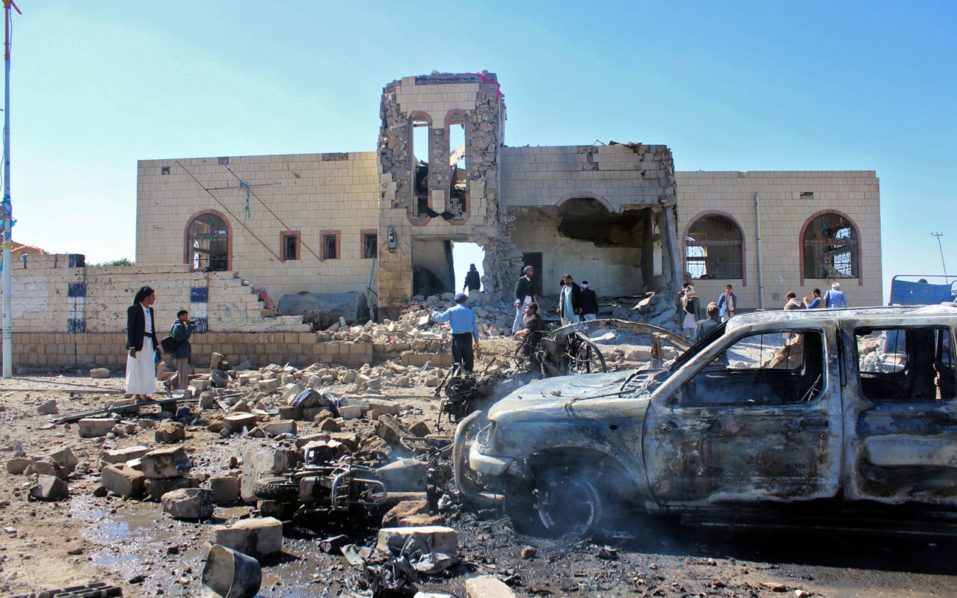 Yemenis inspect damage at the site of a reported Saudi-led coalition air strike, in the northwestern Huthi-held city of Saada on December 20, 2017. The Saudi-led coalition carried out a string of air raids killing 11 civilians in the Huthi stronghold on December 20, a day after the rebels fired a missile at the Saudi capital Riyadh, according to a tribal chief and witnesses. / AFP PHOTO / STRINGER

The Saudi-led coalition conducted multiple air raids in Yemen on Wednesday, a day after Huthi rebels fired a ballistic missile at Riyadh in an attack Washington said was enabled by Iran.

The Saudi-led strikes killed 11 civilians in the Huthi stronghold of Saada, a tribal chief and witnesses said, while unidentified assailants attacked Huthis guarding the Sanaa residence of former president Ali Abdullah Saleh, who was killed by the Shiite rebels earlier this month.

The US and Saudi Arabia have accused Iran of supplying the Huthi rebels with the missile involved in another attack over Riyadh last month, with US ambassador to the United Nations Nikki Haley presenting what she called “undeniable” evidence that the missile was “made in Iran.”

Tehran has denied supplying ballistic missiles to the Huthis.

During Wednesday’s ground operations against the Sanaa residence of Saleh, an unspecified number of Huthi guards were killed, residents said.

A tribal chief told AFP that 11 civilians were killed and eight others wounded in an air strike on the Huthi rebel stronghold of Saada in northern Yemen.

The pro-Huthi television channel Al-Masirah gave the same death toll and added that women and children were among those killed, while 19 people were wounded.

Witnesses and a security source said other coalition air raids targeted a rebel camp south of Sanaa and a second camp to the west.

The rebel-run Saba press agency said 38 people, including women and children, were killed or wounded in raids targeting different parts of Yemen.

1,000th day
The Huthis said the target of Tuesday’s ballistic missile was a “large gathering of Saudi regime leaders in Yamamah Palace”, where Salman later unveiled the country’s 2018 budget.

An Arab national living in Saudi Arabia was arrested Wednesday for expressing support for the missile attack in a tweet, the Saudi Press Agency reported.

Yemen is in the midst of a bloody war between the Huthis and pro-government forces, who were expelled from Sanaa in September 2014.

Rebel chief Abdelmalik al-Huthi said Tuesday’s attack was timed to coincide with the 1,000th day of the Saudi-led intervention in Yemen’s conflict.

On November 4, a missile launch from Yemen targeted Riyadh’s airport, triggering a sharp Saudi response — the full closure of Yemen’s ports and borders that were already under an extensive blockade.

At the time, the UN aid chief warned that the siege — namely on the key rebel-held port of Hodeida — could trigger the worst famine the world has seen in decades.

The coalition issued a statement Wednesday saying it would not resort to closing Hodeida port.

“The coalition leadership announces the port of Hodeida will remain open for humanitarian and relief supplies and the entry of commercial vessels, including fuel and food vessels, for a period of 30 days,” said the statement, carried on the state-run Saudi Press Agency.

Britain’s Prime Minister Theresa May spoke to Salman and welcomed the decision to reopen the port.

“The Prime Minister strongly condemned yesterday’s attempted missile attack on the Yamama Palace in Riyadh, and welcomed the restraint shown by Saudi Arabia in the face of unacceptable Huthi aggression,” Downing Street said in a statement.

Coalition spokesman Turki al-Maliki, speaking at a news conference in Riyadh, described the continuing missile fire as a “serious escalation”.

Maliki said that since the coalition intervened in Yemen in March 2015 over 80 ballistic missiles had been fired at Saudi Arabia and that the alliance had killed more than 11,000 Huthi rebels.

Hadi terms for dialogue
Saudi Arabia and America have accused Iran of being behind the missile attacks on Riyadh.

Tehran again denied the charge Wednesday, saying it has “no arms link with Yemen”.

Yemen’s President Abedrabbo Mansour Hadi on Tuesday raised the bar for dialogue with the Huthis, saying they must surrender their weapons before the start of any peace talks.

“We do not have a partner with whom we can reach peace,” the exiled president said at a meeting with a number of ambassadors.

Hadi issued stern conditions for dialogue: the restoration of his government to power; the surrender of Huthi arms; and the handover of state institutions.

More than 8,750 people have been killed since Saudi Arabia and its allies joined the government’s fight against the rebels, triggering what the UN has called the world’s worst humanitarian crisis.