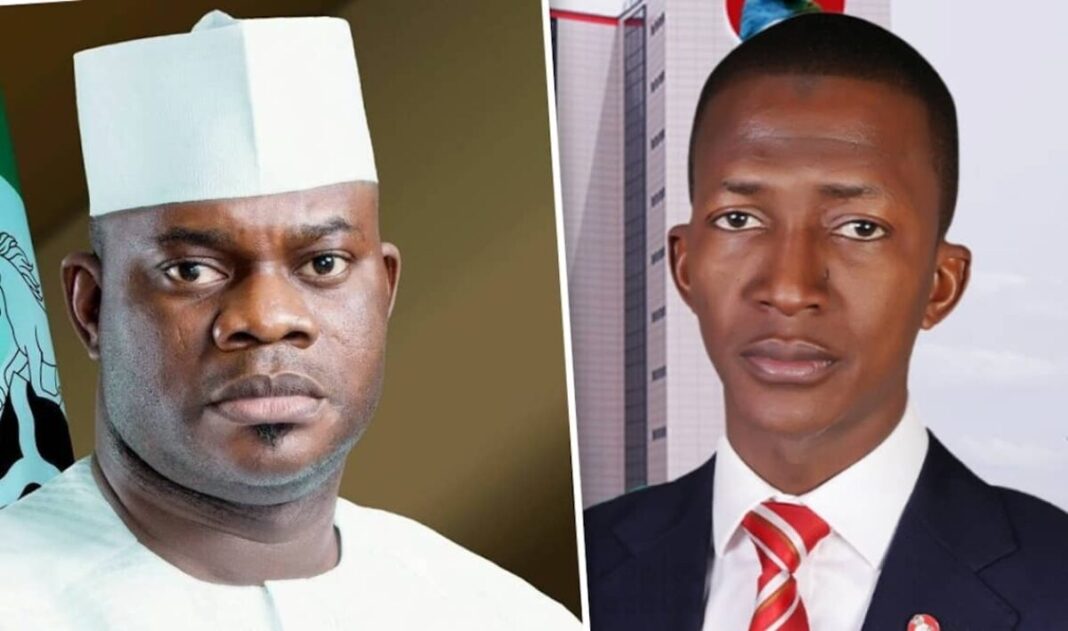 This is contained in a statement on Friday by the EFCC’s spokesperson, Wilson Uwujaren.

The application, according to the Commission’s counsel, Kemi Pinheiro, SAN, is sequel to the decision of the management of Sterling Bank Plc to return the total sum of N19, 333,333,333.36 standing in the credit of the frozen account back to the Central Bank of Nigeria.

On August 31, 2021, Justice Tijani Garba Ringim, a vacation Judge, had ordered the freezing of the account, following an ex-parte application filed by the EFCC.

The EFCC, in a 13-paragraph affidavit in support of the ex-parte application, had stated that it received a credible and direct intelligence, which led to the tracing of the funds reasonably suspected to be proceeds of unlawful activities in an account No. 0073572696 domiciled in Sterling Bank, Plc with the name Kogi State Salary Bailout Account.

Moving the application for the interim forfeiture of the funds on August 31, 2021, A. O. Mohammed, counsel to the EFCC, had urged the court to grant the Order so as to prevent further dissipation of the funds in the account.

Mr Mohammed had also told Justice Ringim that the N20 billion loan meant to augment the salary payment and running cost of the government was kept in an interest-yielding account with the Bank.

According to him, “ Instead of using the money for the purpose it was meant for, Sterling Bank Plc, acting on the instruction of the Kogi State Government, transferred the money from the loan account and placed it in a fixed deposit account.”

Mr Mohammed further told the court that the Bank had yet to present any credible evidence to show that the facility was well secured.

After listening to the applicant’s counsel, Justice Ringim had ordered the freezing of the account number 0073572696, and also directed the publication of the order in a national newspaper by the EFCC.

At the last adjourned sitting, counsel to the Kogi State government, Prof. Sam Eguro, SAN, had told Justice Aneke, whom the matter was re-assigned to, that his client had filed processes against the interim order granted by Justice Ringim, and that the EFCC had equally filed reply to the same.

Mr Erogbo, had, therefore, told the court that he needed time to respond to the EFCC’s counter-claim and also asked for a short date to hear his applications.

In his response, counsel to the EFCC, Rotimi Oyedepo, had admitted being served with the processes, and added that he had equally filed his counter.

Consequently, Justice Aneke adjourned to today for hearing of all applications.

At the resumed sitting today, counsel to the EFCC, Kemi Pinheiro, SAN, told the court that the management of Sterling Bank Plc, where the account number 0063572696 with the name Kogi State Salary Bail-out account is domiciled had acknowledged the existence of the said account in its book, “but claimed the same was a mirror account.”

He further told the court that the management of Sterling Bank, where account number 0073572696 with the name Kogi State Salary Bail-out account is domiciled had clarified the questions leading to the commencement of the suit.

Credit of the account frozen pursuant to the Order of this Honorable Court”, adding that “That the management of Sterling Bank PIc, where account No. 0073572696 is domiciled has, pursuant to a letter dated 15 September, 2021, signed by its Managing Director ,indicated  intention to return the total sum of N19,333,333,333.36 back to the Central Bank of Nigeria.”

He, therefore, prayed that it “is expedient for the instant suit to be discontinued and the account unfrozen to enable the management of Sterling Bank PIc effect the transfer/ return of the sum of the sum of N19, 333, 333, 333.36 back to the coffer of the Central Bank of Nigeria , where the said bailout funds was disbursed.”

In his response, counsel to the respondent, Eguro, acknowledged the notice of discontinuation.

In his ruling, Justice Aneke held that, “since this is what they are asking for, the application is therefore granted as plead.”