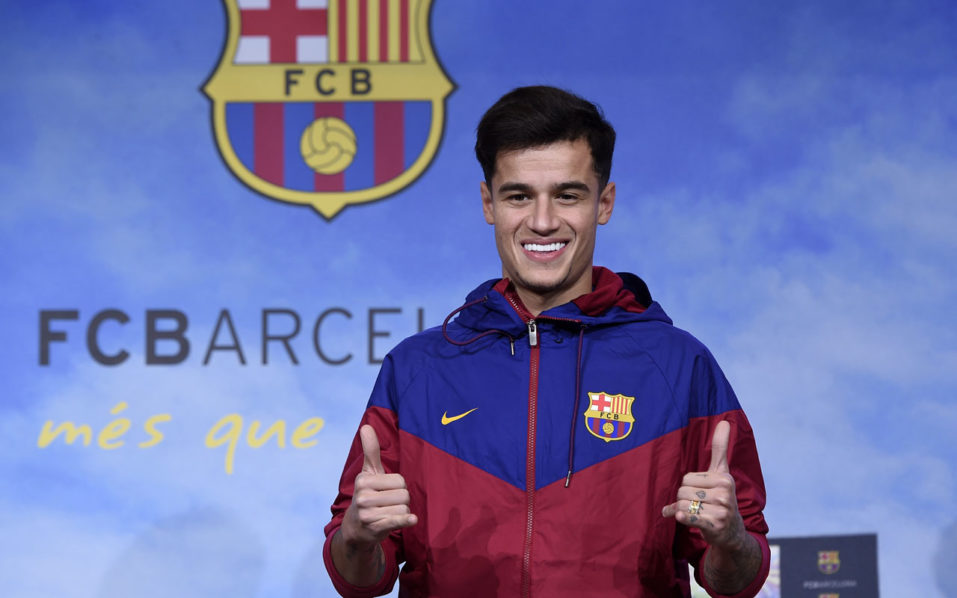 Barcelona’s new Brazilian midfielder Philippe Coutinho poses for a picture in Barcelona on January 7, 2018.
Coutinho is in Barcelona to tie up a 160-million-euro ($192 million) move from Liverpool, the third-richest deal of all time. / AFP PHOTO / Josep LAGO

Philippe Coutinho officially joined Barcelona on Monday, completing a move from Liverpool thought to be worth 160 million euros ($192 million), making it the third richest transfer in history.

But minutes before he put pen to paper, the club said a thigh injury would delay his debut until the end of January.

In a video message on Sunday showing Coutinho posing for photographers at the Camp Nou wearing a Barcelona jacket, he said: “I want to play, win trophies and make the supporters happy. Those are my objectives.

Coutinho said he was excited about playing alongside Messi, Luis Suarez and Andres Iniesta.

He described them as well as club stalwarts Gerard Pique and Sergio Busquets as “idols”.

Coutinho has already lined up alongside Suarez for 18 months at Liverpool before the Uruguayan made the same move to Spain in 2014.

“Everybody knows about his quality. He has been playing at the highest level for years now and that is important,” Suarez said.

“Now we need to make sure he feels at home because we know that changing club is always difficult, but I think he is the type of player who will fit well into the team.”

Valverde admitted that it would be a challenge shoehorning his new recruit into a squad already running away with the Spanish league title.

“Coutinho is a player who I think can bring a lot to us,” said Valverde. “He’s an important signing.”

“I have seen him play in various positions — on the right, the left, in the middle, on the wings. We will evaluate all of this… but, of course, I don’t think he will play as a goalkeeper!”

The timing of Barca’s move for Coutinho has been questioned because he will not be able to play in the Champions League this season having already played in the competition for Liverpool.

But he is likely to be used to give 33-year-old Iniesta a rest, keeping the veteran midfielder fresh for the Champions League.

– Blow for Liverpool –
The swoop for Coutinho — which contains a 400 million-euro release clause — is the third biggest transfer in football history, outranked only by Paris Saint-Germain’s world record 222 million-euro signing of Neymar from Barcelona last year, and their capture of French striker Kylian Mbappe for a deal eventually worth 180 million euros.

Rio-born Coutinho arrived at Liverpool from Inter Milan for a mere £8.5 million (9.6 million euros, $11.5 million) in January 2013 and scored 54 goals for the club in all competitions, although he won no silverware during his five-year stay at Anfield.

Barcelona had tried to sign Coutinho last summer and his departure is a blow to Liverpool as he had just returned to top form after an injury-hit start to the season, scoring seven goals in the last eight games of 2017 to put his side firmly in the Champions League places.

“It is no secret that Philippe has wanted this move to happen since July, when Barcelona first made their interest known,” said Liverpool manager Jurgen Klopp.

Coutinho’s signing allows Barca to move on from the bitter experience of losing his Brazil teammate Neymar to Qatar-backed PSG.

Coutinho’s age is also highly attractive to Barca with Messi, Suarez and Iniesta all in their thirties.

Liverpool have been tipped to quickly reinvest their windfall from the Coutinho sale.