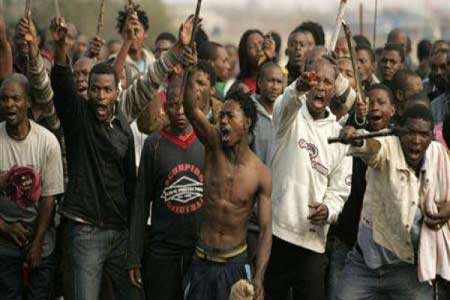 Christmas celebrations were on Monday disrupted by some suspected cultists in Bwari, headquarters of the Bwari Area Council of the Federal Capital Territory, FCT.

The crisis broke out in the early hours of the morning when some suspected groups of cultist stormed the centre of the town, forming barricades and burning car tires at major junctions, depriving commuters and motorists access to the roads.

Consequently, Christian worshipers who were holding Church services were seen running in different directions for safety.

A source at the Emir of Bwari’s place, told NAN that the crisis erupted because a member of the groups was allegedly murdered on Sunday, leading to a protest by the others.

An eyewitness, Kunle Joshua, said the mob moved from the market side of the town towards the Emir’s palace, while setting few shops on fire.

Officers of the Nigerian Police Force and the military controlled the situation while residents remained indoors but some members regrouped on the road, forcing motorists to divert or return abruptly.

Many of the Abuja-bound motorists, who fled the scene, diverted their movements through Sabon-Wuse, near Suleja in Niger.

Spokesperson of the Police Command in the FCT, Anjuguri Manzah, confirmed that there was a protest in the town but its cause and those behind it were being investigated.

He said the DPO and the Area Command Headquarters on ground had brought the situation under control.

Mr Manzah denied knowledge of any death in the incident.