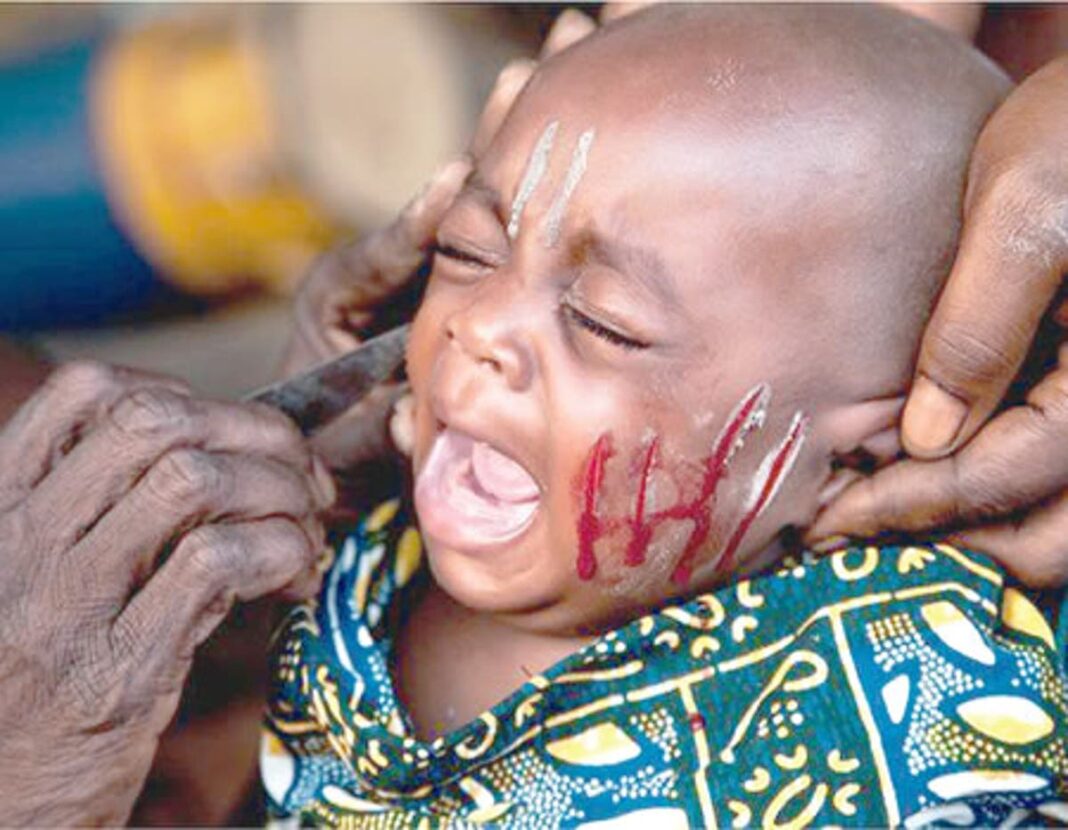 A culture consultant, Mrs Oluwanisola Babatunde, on Tuesday advised Africans to stop the ancient habit of female circumcision and giving tribal marks on children.
Babatunde gave the advice during a symposium organised by the Centre for Black and African Arts and Civilisation, CBAAC, in Lagos.
The symposium had the theme:  “Black and African Peoples: Resurgent Racism and the Challenges of Development in the 21st Century, Globalisation and the Upsurge in Identity Consciousness”.
The culture consultant said that apart from the health implications of female circumcision and tribal marks, the acts made children to feel inferior.
She advised that instead of engaging in female circumcision, the society should focus on proper education of boys and girls on the dangers of early sex.
“Instead of continuing in this ancient habit of female circumcision, I will suggest that the society engages in boys and girls’ education on the dangers of practising early sex.
” Education settles it all.
“Also, tribal marks are not neccesssary again at this age when individuals can be identified based on their languages and  nuances,” she said.
Babatunde urged Nigerians to stop changing their indigenous names and replacing such with western ones, saying that the citizens should take pride in everything that represented their culture.
She called on Nigerians to make efforts to know more about their history.
Olufisayo Okusanya, Managing Director, 6334 Group, said at the event that genital mutilation should stop, adding that certain aspects of Nigeria’s culture should be shaped to align with civilisation.
MR Okusanya urged African leaders to build system intelligence, urging that it should be inculcated into education curricula.
He advised CBAAC to collaborate with the Federal Ministry of Education to decide which aspects of nation’s history to be inculcated in  schools’ curricula.
He said that Africa should be seen as the culture hub of the world.
” We need to reconnect with out roots as Africans, we have always been competent and hardworking.
” We should understand our history and build our competences around it to enliven our culture and historical heritage,” he said.
Steve Harris, a certified Life Coach, advised Africans to tell positive and beautiful stories of the continent to change wrong perceptions.
” We should maintain our identity, we should know that the black race can also dominate the world.
” As a continent, we can design our own way of dominating the world; China is dominating the world technologically, we can explore our culture and develop it well to achieve this,” he said.
Oluwabunmi Amao, Director-General of CBAAC, called on Africans to speak against racism and inequality.
She said that the centre would continue to collaborate with allied institutions to promote the interest of the black people all over the world.
” We must continue to fight against racism and discrimination by teaching the culture of respect and tolerance and sharing the common history of all humanity,” she said.
The News Agency of Nigeria reports that the symposium featured cultural performances including the Zulu Dance of South Africa.
Some of the schools that participated at the event are: Top Grade Secondary School, Surulere; Maryanne College on Lagos Island; Queens College, Yaba; Aunty Ayo International School, Ikoyi; and Christ Redeemers College, Gbagada.
NAN
READ ALSO:   Sanwo-Olu constructs 51 roads, rehabilitates 632 others in Lagos