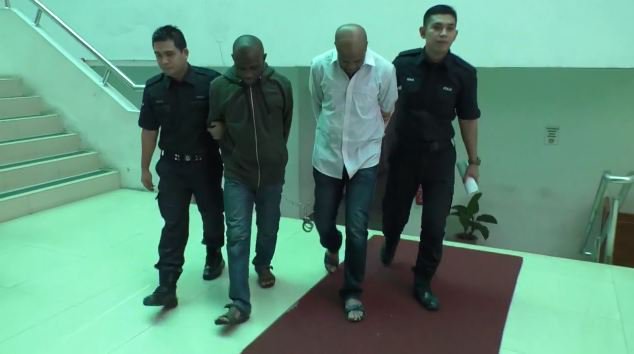 Segun Adeyemihttps://dailynigerian.com/
Jaafar Jaafar is a graduate of Mass Communication from Bayero University, Kano. He was a reporter at Daily Trust, an assistant editor at Premium Times and now the editor-in-chief of Daily Nigerian.
- Advertisement -

A High Court in Malaysian on Wednesday sentenced two Nigerian college students to death for trafficking a 3.5 kilograms of Methamphetamine some three years ago.

The Strait Times Malaysia has it that the Shah Alam High Court judge, Datuk Abdul Halim Aman gave the verdict after finding that the prosecution had proven a prima facie case against the accused, Mustafa Azmir, 28, and Jude Nnamdi Achonye, 30.

Messrs Mustafa and Achonye were accused of trafficking the drugs at an apartment in Petaling Jaya at 3.30pm on September 2, 2014 which is an offense under Section 39B (1)(a) of the Dangerous Drugs Act 1952.

According to the facts of the case, it was confirmed that the accused, who studied at a private college in Kuala Lumpur, were arrested by police when they accepted several boxes containing the drug which was delivered by a courier company at the apartment.

Abdul Halim, in his ruling, said the court had studied testimonies from 13 prosecution witnesses and two defence witnesses, alongside 73 exhibits tendered during the trial.

“The defence had failed to raise reasonable doubt at the end of this case and presented no testimony that thoroughly refutes the prosecution.

“Besides that, there were also discrepancies in testimonies of the accused and their defence only amounted to denial without concrete evidence,” he said.