1 of 10
Juventus’ Argentinian forward Paulo Dybala (R) celebrates with teammates after scoring a goal during the Italian Serie A football match Sassuolo versus Juventus on September 17, 2017 at the Mapei Stadium in Reggio Emilia. MARCO BERTORELLO / AFP 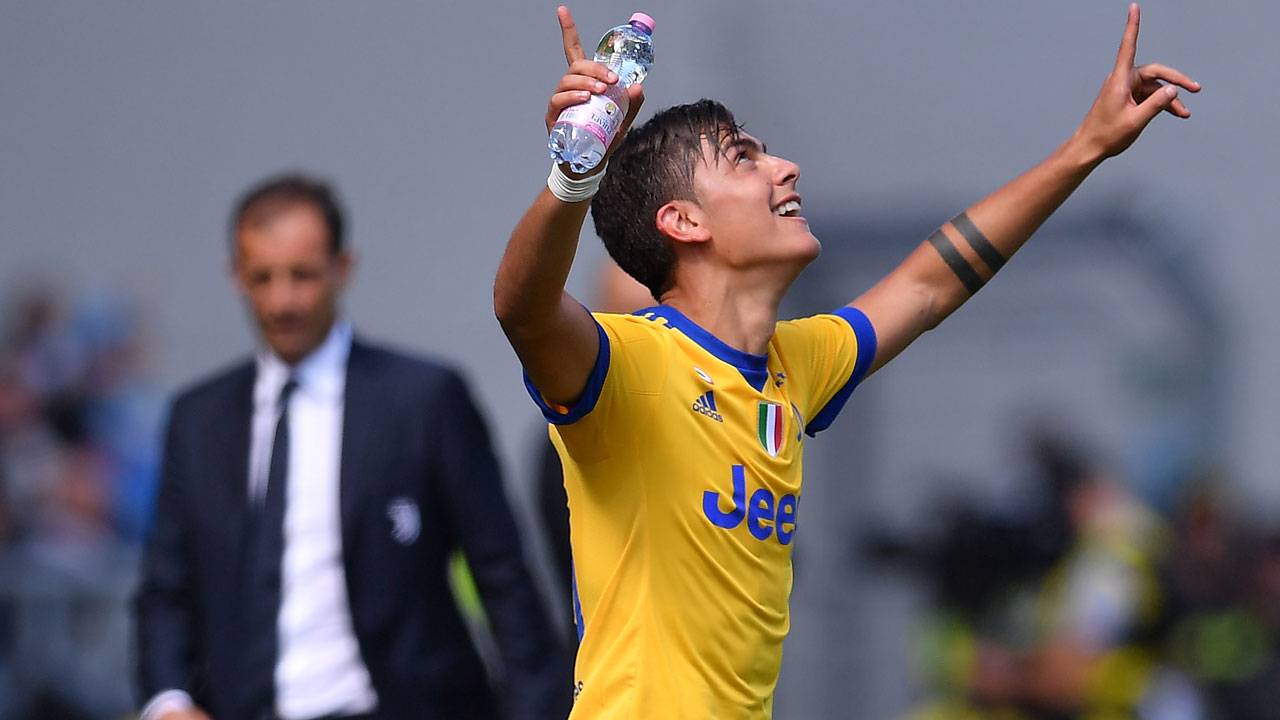 Juventus’ Argentinian forward Paulo Dybala celebrates after scoring a goal during the Italian Serie A football match Sassuolo versus Juventus on September 17, 2017 at the Mapei Stadium in Reggio Emilia. MARCO BERTORELLO / AFP

A Paulo Dybala hat-trick lifted Juventus back to the summit of Serie A alongside Inter Milan with a 3-1 victory at Sassuolo on Sunday making it four wins out of four for the champions.

The Argentina forward left the pitch ten minutes from the end to a standing ovation from the crowd at the Mapei Stadium following a masterclass performance by the 23-year-old who has now scored eight goals in four games.

His first was a left-footed volley from the edge of the box to beat Andrea Consigli on 16 minutes, the second a close-range effort again surprising the Sassuolo goalkeeper just after the break and the third a sublime free-kick on 63 minutes.

Sassuolo managed to get a consolation goal through Matteo Politano after a Stephan Lichtsteiner error on 51 minutes.

“I wanted to score one and three came along,” said Dybala after his second hat-trick of the season and his 52nd goal in his 100th match for Juventus.

The victory also helped Massimiliano Allegri’s team bounce back from the disappointment of their midweek Champions League defeat to Barcelona.

“I hope to continue like that with the number 10 shirt. The team gives me confidence and I also compliment the coach, who gives me the freedom to play where I want.”

Juventus leapfrog Inter, also on the maximum 12 points but behind on goal difference. They won 2-0 at Crotone on Saturday.

Napoli could also join the leading two by making it four wins from four when they play neighbouring Benevento later.

Lazio and Torino can move into the top part of the table if they beat Genoa and Sampdoria respectively later Sunday as AC Milan host Udinese.

Roma eased past Verona 3-0 on Saturday.

Tributes pour in for Indian war hero ahead of state funeral