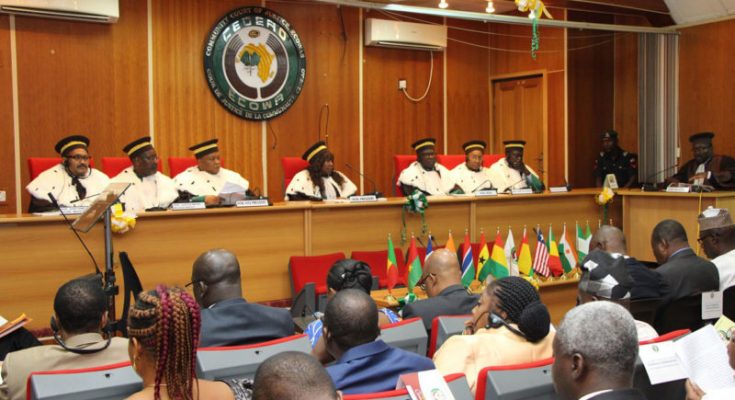 The ECOWAS Court of Justice has ordered the Nigerian Government to pay over N53 million to a German national, Martin Gegenheimer, for unlawful arrest and detention.

The court’s Communications Department disclosed this in a statement on Friday in Abuja, following the judgment of the court on the matter on Thursday.

According to the statement, the court ordered the payment of N53 million as special damages to Gegenheimer for various losses suffered.

It explained that the costs were incurred while Gegenheimer was under unlawful arrest and detention by the Nigerian Immigration Service.

”The cost related mainly to hotel expenses incurred by the German while under forced detention by the government.

“Delivering judgment in a suit filed by the German, a panel of three judges headed by Hon. Justice Edward Amoako Asante, also ordered the government to pay another N10 million in general damages.

“As reparation for all violations and moral prejudice suffered for the violation of his rights and another 10,000 dollars being the expenditure incurred by the applicant to secure his bail.

“The court also ordered the ‘immediate and unconditional release’ of his German passport which was ‘arbitrarily and unlawfully’ seized by the government as well as his removal from the government’s watch list.

“The court, however, ruled that it found no evidence of the violation of the plaintiff’s right to torture,” the statement said.

The statement further stated: “In suit no: ECW/CCJ/APP/23/20 Mr Gegenheimer, who is married to a Nigerian citizen but based in Nairobi, Kenya, through his Counsel, Festus A. Ogwuche, sought the enforcement of his fundamental human rights.

“Along with those of his children arising from his wrongful arrest and unlawful detention and the seizure of his German Passport.

“The Applicants, which also included SAT Swiss Aviation Nigeria Ltd, the company at whose invitation he visited Nigeria, are contending that the German legally entered the country for business purposes.

“But was wrongfully arrested and detained while on his way back to Kenya, resulting in the violation of his rights to fair hearing, freedom of movement and dignity of his human person”.

According to the statement, the applicant alleged that he was not informed about any justifying circumstances recognised by law, and neither was a warrant of arrest nor court order produced as the basis for his arrest and detention.

”He also alleged that he was not afforded the opportunity of fair hearing before any lawful authority or competent court,” the statement said.

In the statement, the court noted that the Respondents through their Counsel, Mallam J.A. Adamu, raised a preliminary objection arguing that since the first applicant was a German, he lacked the capacity to bring the action not being a citizen of West Africa.

The court had earlier ruled that it had jurisdiction to hear the case as the violation occurred in a Member State and non-suited the wife and children of the plaintiff as well as SAT Swiss Aviation Nigeria Ltd as plaintiffs in the suit.

The statement said that the court also none suited the Nigerian Immigration Service as an improper party in the suit.

It stated that in the 48-paged judgment, the court dismissed all the claims of the respondent.