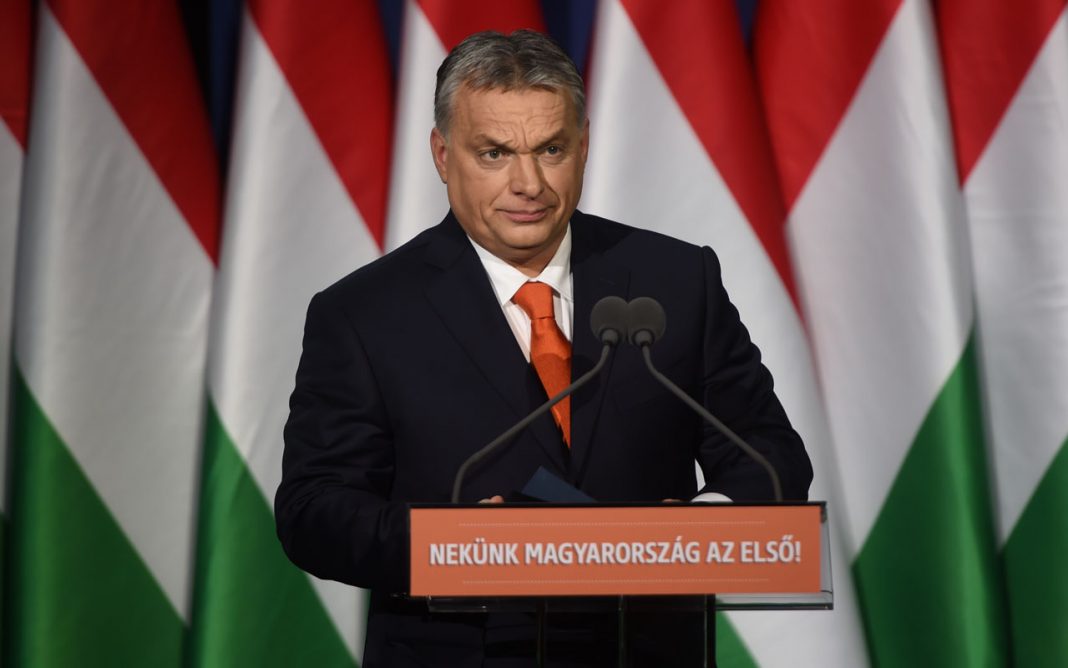 (FILES) In this file photo taken on February 18, 2018 Hungarian Prime Minister and Chairman of FIDESZ party Viktor Orban delivers his state of the nation address in front of his party members and sympathizers at Varkert Bazar cultural center of Budapest. With his fierce rhetoric and anti-immigration measures, Hungary’s Prime Minister Viktor Orban has alarmed critics at home and in Europe, while bolstering his populist domestic support and attracting far-right fans internationally. Orban, 55, defends his government’s record in Strasbourg on September 11, 2018, ahead of a European Parliament vote on a report that says Hungary presents a risk of a “breach” of basic EU values. / AFP PHOTO / Attila KISBENEDEK

With his fierce rhetoric and anti-immigration measures, Hungary’s Prime Minister Viktor Orban has alarmed critics at home and in Europe, while bolstering his populist domestic support and attracting far-right fans internationally.

Orban, 55, defends his government’s record in Strasbourg Tuesday ahead of a European Parliament vote on a report that says Hungary presents a risk of a “breach” of basic EU values.

If the vote on Wednesday backs the report’s findings, the so-called “nuclear option” of Article 7 will be triggered, a procedure that could lead to the suspension of Hungary’s voting rights on EU legislation.

The report, written by Dutch MEP Judith Sargentini, lays out a lengthy list of concerns about Orban’s government since it came into power in 2010, including democratic backsliding, ill treatment of asylum-seekers and NGOs, and corruption.

According to Hungarian officials, however, Sargentini’s report is “riddled with factual errors, lies and half-truths”.

Checks and balances
Elected with a powerful two-thirds majority in 2010, Orban unleashed a legislative whirlwind that included restrictions on the constitutional court’s powers and an overhaul of public media.

The report says that the reforms increased government influence over judges and weakened the judicial system’s ability to keep a rein on government power.

State television and news agency became government propaganda organs, while swathes of the private media sector have been bought by pro-Orban oligarchs.

Most media in Hungary now follows the government line and focuses on anti-migrant content, while corruption scandals are reported by a dwindling number of online outlets.

Sargentini’s report expresses concern over the press reports of widespread corruption, such as conflicts of interest, inaccurate asset declarations by politicians, and public contracts — including funds from the EU — routinely awarded to Fidesz cronies who charge inflated prices.

‘Rigged’ elections
The report says the changes to electoral laws since 2010 have rigged the system in favour of Orban’s right-wing Fidesz party.

It cites international bodies like the OSCE who said that “excessive” government spending on advertising and the dominance of pro-Orban media created an “adverse climate” before the last election in April.

Around half of the electorate voted for Fidesz in April, handing Orban his third consecutive landslide win and two-thirds super-majority.

The government hailed the result as a fresh mandate to carry out anti-immigration policies that Orban says reflect the “will of the people”.

In 2015 his government erected razor wire border fences, and enabled police to physically “push back” migrants across the border into Serbia.

Budapest is also accused of not doing enough to stop — and in some cases facilitating — discrimination against Roma, Muslims and Jews or domestic violence, says Sargentini.

Stop Soros
With the number of migrants slowing to a trickle, in recent years Orban has blamed George Soros, the Hungarian-born financier, for plotting to flood Hungary and Europe with immigrants.

A “Stop Soros” legal package passed in June targets human rights groups that Orban accuses of being a front for migration and includes a special tax on NGO activities and even potential jail terms for staff deemed to be helping illegal migrants.

The clampdowns restrict the basic freedom of civil society and of individuals to voice criticism of the government’s policies, says the report.

Among other basic rights restricted by the government, according to the report, is the academic freedom of the Budapest-based Central European University founded by Soros.