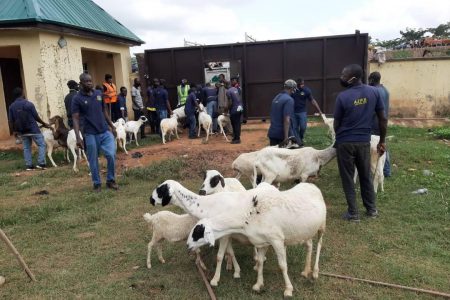 Chairman of the task force, Ikharo Attah, who made this known during a news conference in Abuja, also disclosed that the team impounded five vehicles parked illegally by car dealers at Apo.

He explained that the seized animals and the vehicles would be taken to the Mobile court and a forfeiture order shall be sought, so that the rams and cattle could  be distributed to the prison and various orphanage homes.

Attah said  the operation as authorised by the FCT Minister, Muhammad Bello, was coming against the backdrop of the expiration of a seven-day ultimatum earlier given to enable illegal occupants vacate the places.

He also stated that the administration’s decision to carry out the exercise, stemmed  from the fact that some people were bent on constituting nuisance that could threaten the city’s security and jeopardise environmental safety.

The chairman noted that the issues of sanitation within the nation’s capital was a priority that could not be sacrificed for personal or group interests, hence the attention that was being given to it.

Mr Attah stressed that the illegal motor park around the Apo roundabout and the cattle market, had not just destroyed the aesthetic beauty of the road corridors, but had been turned to hideouts for drug peddlers and other criminal elements.

He, therefore, warned all illegal occupants to vacate from the road corridors.

Mr Attah vowed that the taskforce would sustain the tempo of the clean up exercise, until sanity was restored to that road axis.

He said that the clean up would fast track the completion of the various infrastructural projects along the road which had been hampered by the activities of these illegal occupants.

”The exercise is carried out on the orders of the FCT minister, through a Special Committee he set up to clear the Outer Sourthern Expressway, we have cleared several illegalities on the road stretch and corridors.

”These include the Gudu popular Ram market, Scrap market, otherwise known as pantaker and the illegal motor park around the Apo roundabout.

”We took 26 rams, five cattle and four vehicles, we are taking  them to the Mobile Court and shall be seeking for a forfeiture order from the court.

”We cannot continue to look away from all the illegality and contravention of the city’s master plan.