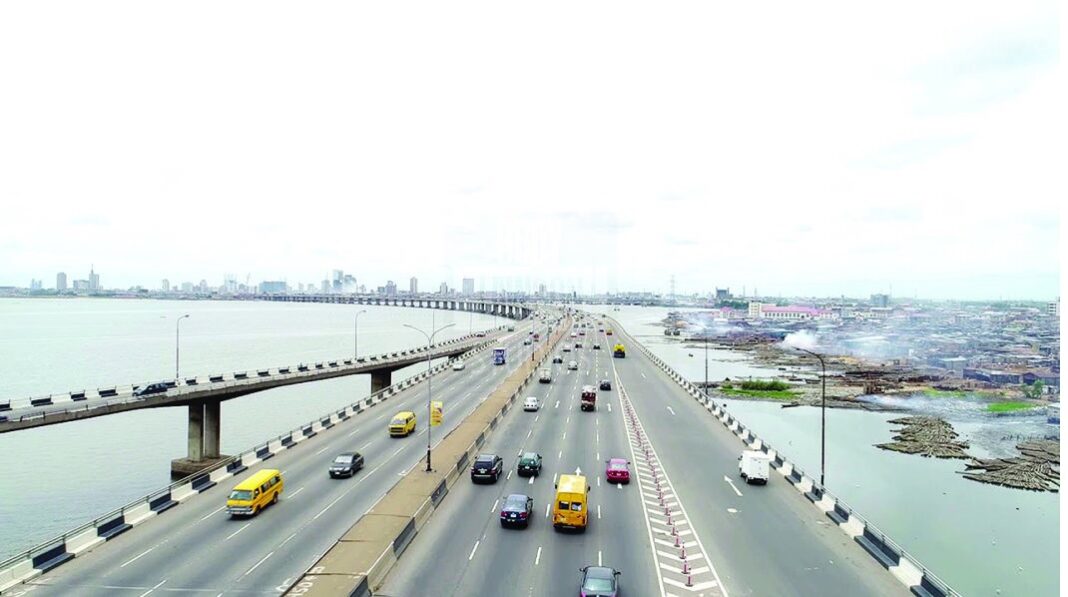 The Federal Government on Saturday reopened the Third Mainland Bridge in Lagos which had been under rehabilitation since July 2019, amid jubilation by road users and  invasion by hoodlums, the News Agency of Nigeria reports.

Workmen began early in the morning to clear the bridge of debris and removed crash barriers from the site and put finishing touches to asphalt laying on some sections before the main opening with spectators watching.

Supervising the reopening at exactly 11:54am Emmanuel Adeoye, Director, Highway Bridges and Design said that work on the surface of the bridge had been completed but additional work would continue underneath.

“We have done a lot of rehabilitation works on the superstructure and the bridge is fit for use now and we are set to open it, that is why we are here.

“For now the superstructure is the main one that is being worked on now we are going to work on the substructure and the foundations much later, but that does not affect the flow of traffic.

“Traffic can be flowing and we can be doing our work under the water quietly. We are opening the bridge now because it is fit for use now.

“The repairs is very durable that is why we have taken pains and have been working on it since July to make sure it is good for use. We have gone round, we have checked, we have found out that it is ok,” he said.

He said that bridge maintenance unit of the Federal Ministry of Works would continue to carry out periodic maintenance subsequently and check components of the bridge.

He said that the work under the bridge would be completed between the next six months to one year.

The Federal Controller of Works Lagos, Olukayode Popoola thanked Lagos residents for their understanding and patience during the rehabilitation works.

Mr Popoola explained challenges which slowed down construction to include the COVID-19 and the EndSARS protests which made the contractor lose some time.

“Now that we have finally opened the bridge today as the Federal Controller of Works in Lagos, I am very happy that the promise that federal government made that this bridge will be rehabilitated and opened to traffic before the end of February has been actualised.

“And I am using this opportunity to express our gratitude on behalf of the Hounourable Minister of Works and Housing, Mr Babatunde Fashola to our host state, that is Lagos State, in particular his excellency, the governor of Lagos State, Mr Babajide Sanwo-Olu for his unusual cooperation when the work was going on,”he said.

Mr Popoola also thanked other ministries and agencies of the state government as well as various engineering professional bodies who made great contributions towards the success of the project.

NAN reports that the reopening of the bridge was conducted with only traffic regulatory agencies present on site with no Police in sight.

Hoodlums who initially extorted motorcycles using the bridge engaged in a free-for-all-fight at the end of the opening ceremony making journalists and engineers to scamper for safety.

However, the first motorists to use the bridge cheered the engineers with some of them shouting out loud “God bless you, progress, one love”.

NAN reports that the Third Mainland Bridge in Lagos, had to be partially shut on July 24 for another round of rehabilitation works.

The repair expected to last six months was extended by one month due to the recent #EndSARS protests in Lagos extending the completion date from January 2021 to February.

The construction was initially divided into two phases of three months on each carriageway, starting with the Oworonsoki bound carriageway whose completion dragged to four months.

Traffic was partially diverted on a stretch of 3.5km where construction is ongoing between Adeniji Adeniji Ramp and Ebute Meta, while different time belts were allotted for traffic diversions on the bridge.

The 11.8km bridge is the longest of the three bridges connecting Lagos Island to the Mainland.

The bridge starts from Oworonshoki, which is linked to the Apapa-Oshodi Expressway and the Lagos-Ibadan Expressway and ends at the Adeniji Adele Interchange on Lagos Island.

Constructed in 1990, the bridge was adjudged as the longest in Africa until 1996 when the Oct. 6 Bridge in Cairo, Egypt was completed.