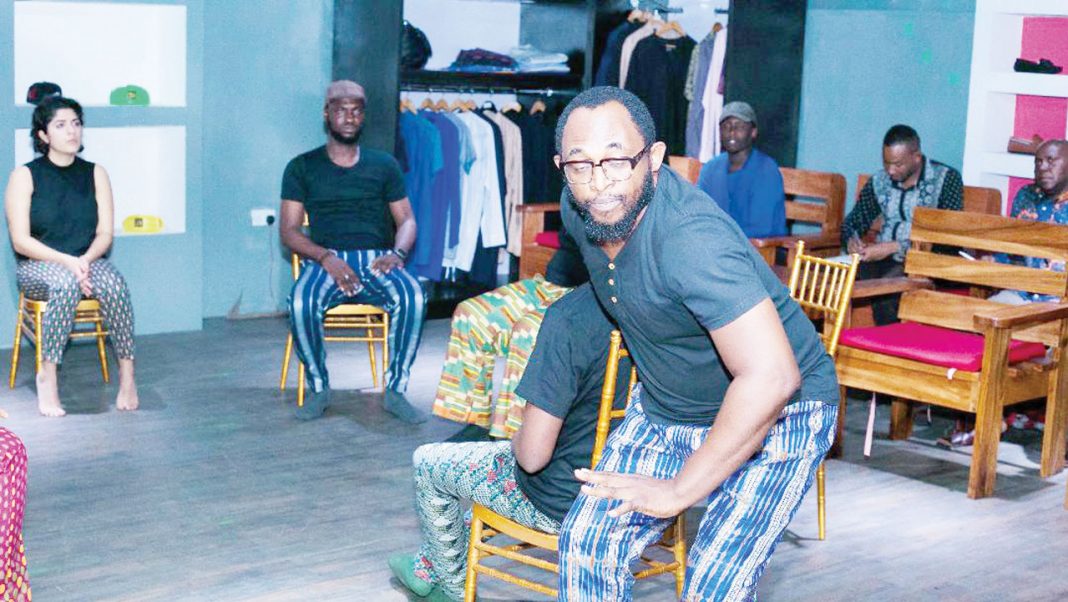 A scene from the play

There are not so much shooting wars in Africa now (except South Sudan), as there are political crassness and economic wars that shut down the hopes and dreams and aspirations of the continent’s teeming millions of youths, who then try to get out by any means necessary to the beckoning lights of Europe for a chance at better living conditions. There is also the prospect of the inevitable financial remittances back home to families to lift millions more out of poverty line. The allure to escape Africa’s harshness to the ease and fortune Europe promises comes with a hefty price.

The deaths in the deserts and seas; the many years wasted chasing an elusive dream and being stranded between Libya, Agadez, and the Mediterainean sea, the grisly tales of Libya’s slave camps and sometimes being washed ashore dead or winding up in migrant camps of Europe are all telling tales of Africa’s desperate youths made adventurous on account of bad politics that fails to deliver economic dividends. Other migrants like those from the Middle East, who are not as blighted as Africans (although war-ravaged Syrians joined the war displacement migrants last year), are not spared the stigma of migrants even though Africans seem to bear the stigmatisation and unwanted alien tag the more.

This is the heart-rending story the Efe Paul Azino-led poetic seven, for want of a better word to describe the group, is doing the round of stage performances. With the support of Goethe Institut, Lagos, the group has performed in Berlin, Germany, and in Lagos last weekend to a small gathering of poetic enthusiasts, at the most unlikely performance space, the Subterranea, Ilupeju. The seven-man cast includes Azino, an Iranian lady based in Germany, Tanasgol Sabbagh, Oby Ifejika, Sola Fakile, Ndukwe Onuoha, Titilope Sonuga and Chika Jones, with music from Femi Leye on the guitar.

With the recent harrowing experiences of Nigerians and other Africans in Libya as background, Finding Home is at once a plea for commonsense among the continent’s youths and an indictment of its political class, who cause political and economic unease at home that prompt these youngsters on perilous journeys, where home becomes a question of perspective. When your home of birth doesn’t feel like home any more, where else do you find home? And when the new, alien home becomes unwelcoming, where then do you turn to find real home? These are the uneasy questions Finding Home attempts answers in a poetic performance language that is at once engaging and probing in its depth of felicity.

The seven-man cast of three women and four men plumb the depth of poetry for the unraveling of one of Africa’s shame exposed at the international level in the question of identity. With 26 ladies found dead in an Italian war ship, hundreds more in slave camps in Libya, yet the migration quest seems unabating. What is Africa?

According to its director, Azino, “The collaboration with Goethe Institut, called Finding Home. It was premiered in Berlin in October this year. It’s a story of identity and migration, which resonates particularly strongly today given the whole Libya slave trade/migration debacle. It is delivered entirely in poetry by outstanding Nigerian and German poets.”

Finding Home is a story that constantly leapt across seas and boundaries in its back and forth stratagem, as Africa’s restless young ones, who feel trapped in a netherland of impoverished continent, keep trying to find a home that remains ever so elusive, with home never being home at all. These are the stories of the young men as well as those of the young women, who, forever brimming with life and promise, find home in Africa too small and narrow for the size of their big dreams. So, they are constantly looking across the continent’s shores for things big enough to contain their dreams.

So, first they leave their backwater, constricting villages to Lagos and such big cities to try their luck. Soon, they find that even these big cities have since become too narrow and impoverished by those who lead and no longer hold any promise for them. Then they begin to look across the seas to Europe and America in what would seem willful, second wave of trans-Atlantic, economic enslavement across the seas.

On arrival, they discover it has all been a mirage, just a dream, with little substance, as the harsh reality of Europe and America dawns on them. With no papers and legitimate means of livelihood, they are in race against time. They enter into all forms of alliances just to survive. Sometimes, such alliances work; sometimes, they don’t. No matter how talented they are, they are mere illegal, unwanted aliens.

And so “desperation stalks us in this illusion (in foreign land)” and they are forced to “sit on (my) deflated optimism and punctured enthusiasm” and “hope” becomes “where my home is. Where is home?”

And then Chika Jones would continue his tangential mourning of the Ogbesuwa, Asaba, massacre of 1967, as the blood of the innocent continues to sprout from the bullet wounds of victims everywhere and on the floor…

Clearly, Finding Home is apt for the times and surely it deserves a bigger performance space and audience for its intended meaning to reach as many people, young and old alike, as possible. A terrific job of poetic performance is Azino’s Finding Home!