Five outstanding players over the weekend

With majority of the leagues back in action, Nigerians round the world shone to varying degrees. Here are five of the brightest luminaries over the weekend.

It was an electric performance from Samuel Eduok over the weekend. The forward notched a brace– both equalisers– against Alanyaspor in Kasimpasa’s 3-2 victory. Eduok drifted intelligently into dangerous half-spaces and was a real attacking threat all night. His first goal in the 22nd minute was a header where he leapt highest to glance in Strahil Popov’s whipped cross.

Eduok went close to getting his second in the 68th minute but his toe-poked effort from a stretched gait didn’t have enough sting to it to best goalkeeper Haydar Yilmaz. Two minutes later, his right-footed strike crashed against the upright after he was slipped through by his teammate. His power and precision in the 71st minute was unerring when he rifled a shot with his left foot into the top corner. David Pavelka’s mazy run made the goal but Eduok’s awareness to drop back in line with the defense was also laudable. The former Dolphins forward now has six goals in ten starts in the Turkish Liga and he is playing with the confidence of a man with the world at his feet.

Read Also: Outstanding five: Iheanacho, Obi and others who rocked the weekend 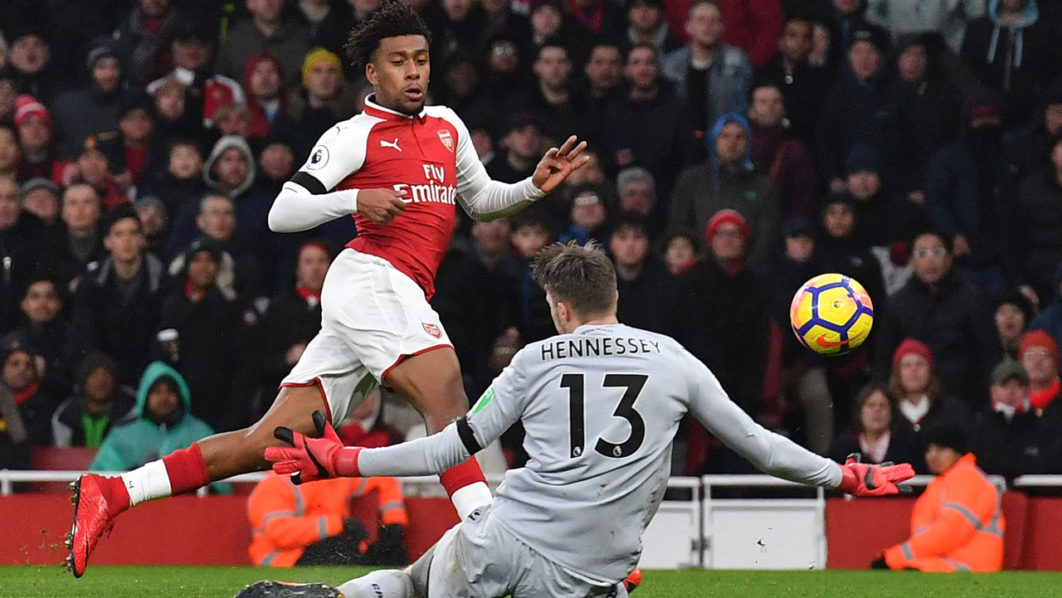 With all the talk of Henrikh Mkhitaryan and Pierre-Emerick Aubameyang joining the Gunners, a fair few looks over his shoulder and the feeling of insecurity might not be entirely out of place for Alex Iwobi but his performance against Crystal Palace bore no semblance of a man scared for his place. Iwobi played with a confidence that had not been seen lately from him, he was not culpable of breaking down moves, overrunning balls and hitting over-ambitious passes. It was a positive performance from Iwobi and his goal in the tenth minute was the start. Iwobi’s return pass to Alexandre Lacazette was fractionally overweighed but luckily the ball fell to Nacho Monreal who took to the byline before carefully drilling back the ball for Iwobi to stab home.

Iwobi could have had a second goal but for Wayne Hennessy’s brilliant save.

That took quite a while. Victor Moses opened his scoring account this season in Chelsea’s 4-0 humbling of Brighton and Hove Albion. Moses’ first goal in his last 40 league games was impressive: the timing of the run,the strength to outmuscle his opponent, the touch to bring the ball under control and the finish with aplomb. It was a smart run behind the defence allied with a smart finish.

Moses offered width, stretched the Brighton defence and wielded considerable offensive threat. The wingback had a hand in Eden Hazard’s opener, his low powerful drive was deflected into Hazard’s path to finish.

At the CHAN tournament, Sunday Faleye has been the one bright spot for Nigeria. He further improved his stock with his goal against Libya which also is the only goal Nigeria have scored in the tournament. The former 3SC winger was purposeful with his runs. Though he slipped twice while on a promising break, Faleye never shirked responsibility still requesting the ball. His goal came in the 78th minute when he stabbed home from close range Osas Okoro’s corner kick.

Shehu Abdullahi marked his final game at Anorthosis Famgusta with a goal. The Super Eagles right back scored his team’s second goal from the spot in the 59th minute. The former Kano Pillars was handed the captain’s armband for his last match before his move to Bursaspor in the Turkish Liga.

Culled from The Guardian

US will 'never allow' Iran to have a nuclear weapon: Pence