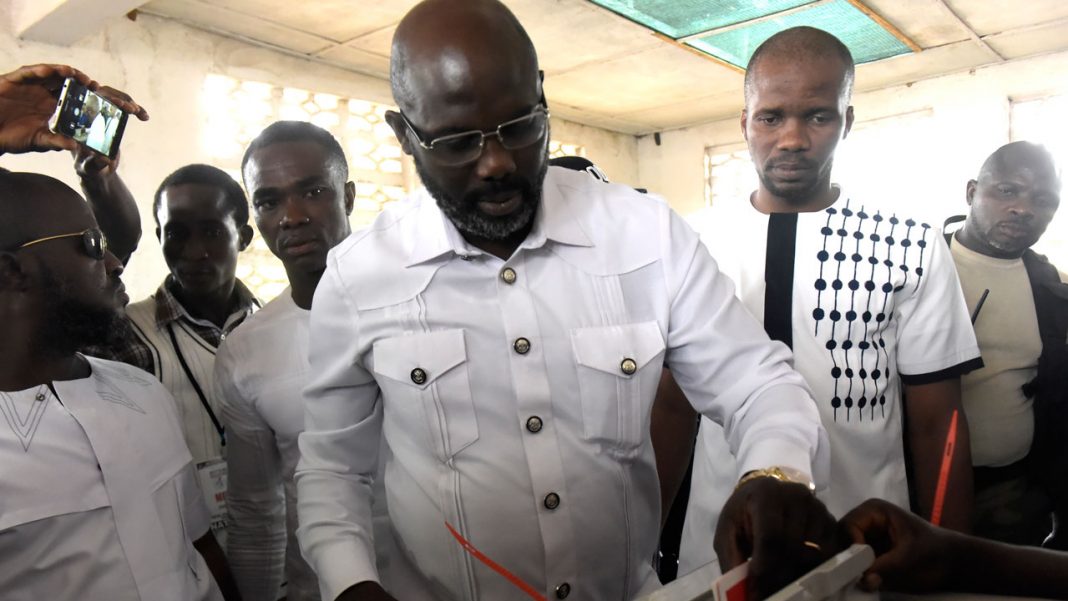 Football icon and candidate for the president election for the Coalition for Democratic Change (CDC), George Weah casts his ballot for the second round of presidential elections on December 26, 2017 at a polling station in Monrovia. Liberians go to the polls in a run-off presidential election on December 26 between Vice President Joseph Boakai and footballing icon George Weah, a vote that will mark the country’s first democratic transition since 1944.SEYLLOU / AFP

Dismissed as illiterate when he first contested in 2005, George Opong Weah could become Liberia’s 25th president.The only African to have won the Ballon d’Or and FIFA World Player of the Year, Weah looked set to beat his opponent, 72-year-old vice president, Joseph Boakai, clinching 12 of the 15 counties in the West African state.

He has already claimed victory in a tweet saying: “It is with deep emotion that I want to thank you, the Liberian people, for honouring me with your vote today. It is a great hope. I am deeply grateful to my family, my friends and my loyal supporters, who contributed to our campaign during this extremely long election season. We are on the verge of making history for our people.”

The countries National Elections Commission (NEC) however is yet to make any official declaration on the outcome of the election. On its website yesterday, NEC said it would “on Thursday December 28 (today) begin the announcement of provisional results of the 2017 presidential runoff”.

If he is declared winner, he would take over from Nobel Peace Prize winner, Ellen Johnson Sirleaf, who defeated him in the 2005 election. With 60 per cent of the country’s population under the age of 30, Weah’s clout as a footballing icon appeared to have given him support among the youth.

Weah topped the first round of voting in October but failed to secure the 50 per cent needed for an outright win. The runoff was delayed twice following allegations of fraud and irregularities.

Born on October 1, 1966, he came into footballing prominence when he joined Cameroun’s Tonerre Kalala in 1988 and left for Europe after a CAF Champions Cup defeat at the hands of Nigeria’s Iwuanyanwu Nationale.In Europe, he was recruited by Monaco, with the then coach, Arsene Wenger, transforming him into the deadliest striker in the early 1990s. He also played for Paris Saint-Germain, AC Milan, Chelsea and Manchester City before finishing his career at Marseilles.

It was during his five years at AC Milan (1995 to 2000) that he confirmed his reputation as one of the world’s most fearsome strikers, winning the Ballon d’Or in 1995 and FIFA World Player of the Year in 1996.

A highly decorated professional, he won the African Footballer of the Year award thrice, the Serie A twice, Ligue 1 once as well as many domestic cups in France and Italy.He turned to politics after retiring from football and moved to the United States to further his education on the advice of former Nigerian president, Olusegun Obasanjo, who suggested Weah was immature to lead a nation just emerging from a civil war.

In the 2005 polls, his party, Congress for Democratic Change (CDC), won three seats in the senate. Weah had since 2015 served as senator for Montserrado County.