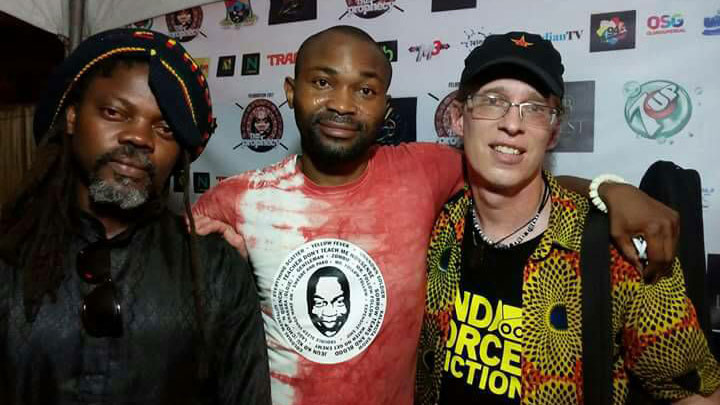 Freemuse, an international human rights organisation advocating for artistic freedom through its Africa regional office based in Lagos, recently received Chicoco Sound Club at 2017 Felabration. Chicoco Sound Club is a revolutionary collective of musicians, singers, rappers and DJs from the U.S., Europe, Mexico and Africa, but based in the Orkika waterfront shanty in Port Harcourt at the Chicoco Media Centre.

Joined together by the love of Fela Kuti and the Afrobeat music he created, but steeped in the music of the Niger Delta, from its traditional rhythms and dialects to the highlife created by the Delta’s favourite son, Cardinal Rex Jim Lawson, has, in the last three years, made these artists to reimagine and recreate Fela’s most important songs, including ‘Zombie,’ ‘No Agreement,’ ‘Lady,’ ‘Coffin for Head of State’ and ‘Shakara’ amongst others.

With grooves built around the original beats, bass, horn and guitar lines inflected by local styles and rhythms, and lyrics inspired by Fela but sung and rapped in local languages ranging from Arabic to Amazigh, Farsi to Tsotsil, the resulting songs remind a new generation that Fela’s genius and insights are as relevant today as they were two generations ago.

The project began literally in a hail of tear gas and chants, during the Egyptian revolution of 2011-13, when Grammy winning guitarist and arranger, Mark LeVine and Egyptian ‘Singer of the Revolution,’ Ramy Essam realised that Fela’s ‘Zombie’ described the situation in Egypt today as well as it did Nigeria in Fela’s time. Revolutionary artists from Morocco, Syria, Egypt and Iran joined in, as did Seun Kuti, with the music performed by the Bologna-based Afrofunk group, Voodoo Sound Club.

For their first performance at Felabration, Chicoco Sound Club was thrilled to be joined by Nigerian highlife singer, Adekunle Gold, and Ghanaian highlife and Afrobeat pioneer, Ebo Taylor, one of Fela’s oldest friends and collaborators, who first performed in Lagos half a century ago, as well as fellow Ghanaian seprewa and xylophone virtuoso, Aaron Bebe Sukura.

Speaking with The Guardian, Chicoco musician singer lead and trainee, Sira Dumedam, explained that the group was inspired by the profound similarities of their experiences of oppression and dispossession and the Kalakuta-like struggles of the Chicoco community centre built out of the ashes of the original neighbourhood, where 9,000 homes were destroyed by the government in a single day in 2009.

According to her, the artists working with the centre immediately took up the challenge, recording a new version of ‘No Agreement,’ with lyrics dealing with the struggles of young women against sexism and harassment. This, she said, became the first collaboration of the ‘Sessions at the Shed’ project, which brought well known artists to the Chicoco community centre to work with the young artists of the area.

“So impressive was the energy and creativity of this song that the international artists’ rights organisation, Freemuse, chose it as the official song for International Music Freedom Day 2016 and was performed at an historic show by many of the artists involved at the Music Freedom Day festival in Harstad, Norway. Next Malian super group, Songhoy Blues, inspired by ‘Zombie,’ did their own remake of ‘Shakara,’ singing in Bambara and Touareg, with a blazing sax solo provided by Femi Kuti. Once again, ‘Shakara’ was chosen as the official song for the 2017 International Music Freedom Day”, she explained.

On his part, leader of Crown Troupe of Africa, Mr. Segun Oriade Adefila, commended Nigerian young artists for keeping the memory of the late Afrobeat music icon alive by recreating it in different forms. He urged political leaders to invest more in the creative industry, which he said is a cash cow for the country.

In a remark, a professor of history and music at the University of California, U.S., Mark Levine, charged Nigeria musicians to collaborate more and use the instrumentality of music to fight some of the major ills bedevilling the Nigerian society.