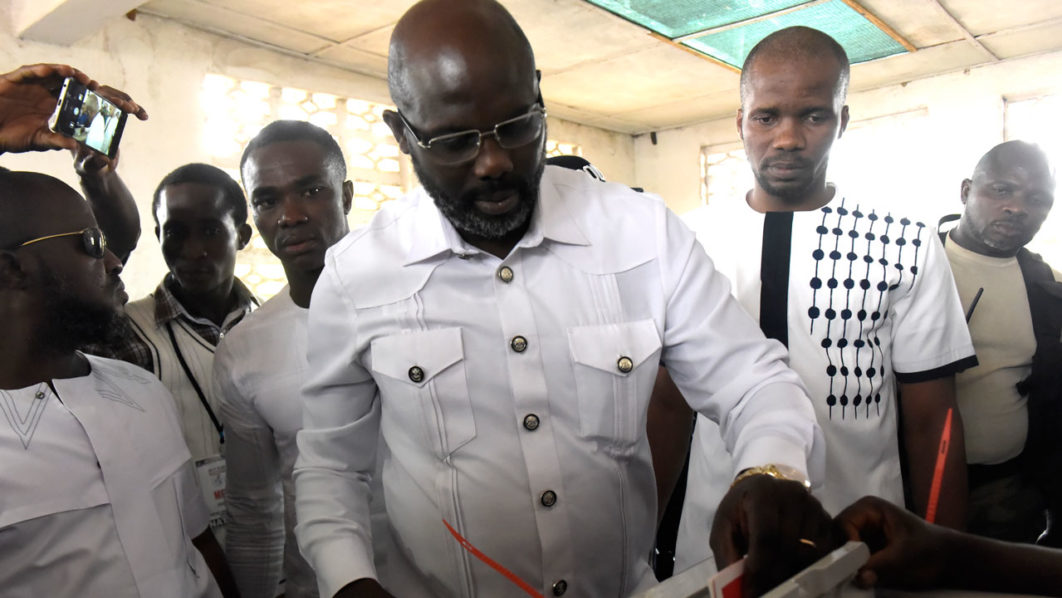 Football icon and candidate for the president election for the Coalition for Democratic Change (CDC), George Weah casts his ballot for the second round of presidential elections on December 26, 2017 at a polling station in Monrovia. Liberians go to the polls in a run-off presidential election on December 26 between Vice President Joseph Boakai and footballing icon George Weah, a vote that will mark the country’s first democratic transition since 1944.SEYLLOU / AFP

The National Election Commission (NEC) said Weah had won an insurmountable 61.5 percent of Tuesday’s vote, which was delayed several weeks after a legal challenge from Boakai.

The NEC said that with 98.1 percent of all votes counted, Boakai had only secured 38.5 percent support.

Ahead of Thursday’s results, armed and helmeted police deployed outside the poll body’s headquarters and some of Weah’s supporters were already rejoicing.

“The Liberian people clearly made their choice… and all together we are very confident in the result of the electoral process,” tweeted Weah before the official results were announced.

Weah topped the first round of voting in October with 38.4 percent of ballots but failed to win the 50 percent necessary to avoid a run-off. Boakai came second with 28.8 percent.

‘President Weah?’
Weah is the only African ever to have won FIFA’s World Player of the Year and the coveted Ballon D’Or. The 51-year-old starred at top-flight European football clubs Paris Saint-Germain and AC Milan in the 1990s before playing briefly in England for Chelsea and Manchester City later in his career.

“Is it President Weah?” said the New Dawn newspaper on Thursday, referring to a man who has the backing of heavyweights including former warlord Prince Johnson and apparently the covert support of outgoing president Sirleaf.

Her office said it had set up a team “for the proper management and orderly transfer of executive power from one democratically elected president to another”, adding that it included several ministers.

Sirleaf’s predecessor Charles Taylor fled the country in 2003, hoping to avoid prosecution for funding rebel groups in neighbouring Sierra Leone. Two presidents who served prior to Taylor were assassinated.

The tumultuous events of the past seven decades in Liberia, where an estimated 250,000 people died during back-to-back civil wars between 1989-2003, have prevented a democratic handover from taking place since 1944.

UN Secretary-General Antonio Guterres hailed the “peaceful conduct” of the vote, praising “the government, political parties and the people of Liberia for the orderly poll”.

The EU’s chief observer, Maria Arena, congratulated the candidates and the Liberian people on a peaceful vote that “generally respected constitutional rules”.

– ‘Exciting moment’ –
The election passed without a single major incident of violence despite weeks of delays caused by legal challenges and Liberians said they were looking forward to a peaceful handover after 12 years under Sirleaf.

“Since years of civil war this is the first time we see the transition of power from one person to another,” voter Oscar Sorbah told AFP.

The Sirleaf administration, elected in 2005, guided the nation out of the ruins of war and through the horrors of the 2014-16 Ebola crisis, but is accused of failing to combat poverty and corruption.

Weah’s CDC party watched their icon miss out on the presidency in a 2005 bid. He was similarly frustrated when he ran for vice-president in 2011, but has repeatedly urged its young and exuberant supporters to keep cool.

“No matter what the provocation will be, CDC will not respond with violence,” Jefferson Kotchie, head of the youth wing of the CDC, earlier told supporters assembled at the party’s headquarters.

The run-off was delayed for seven weeks due to legal challenges lodged by Boakai’s Unity Party against the electoral commission over the conduct of the first round, but many of the complaints appeared to have been addressed in the second round.