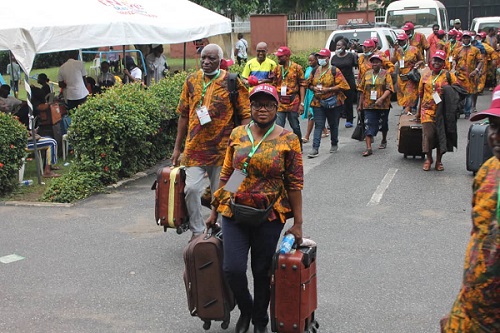 Mr Ishaya made this known on Wednesday at the Dead Sea Spa Hotel in Sweimeh, Jordan, while fielding questions  from newsmen.

He said that the gesture showed the commitment of the state government towards the spiritual welfare of its citizens.

According to him, the amount spent on the 70 pilgrims undergoing the spiritual exercise in Jordan include the fees for their COVID-19 test.

He said that the state government in line with the need to ensure that pilgrims did not bear any costs regarding the pilgrimage paid the money for the COVID-19 test including those of five self-sponsored pilgrims.

“The State government has the passion that religion should be practised both ways and the administration runs an all inclusive policy in governing the state.

“For the effort of the government of Gombe State, I will appeal to the people to appreciate what the government has done in spite the harsh economic situation.

“Coughing out over N100 million for a venture to strengthen people’s faith is commendable and I will remain grateful to Governor Inuwa Yahaya for granting this approval that brought us to Jordan,” Ishaya said.

According to him, pilgrimage is to strengthen the faith of believers and for pilgrims to come, see and then return to practicalise what they have seen by preaching and sharing love.

He appealed to the pilgrims to take the lead in promoting unity in their communities when they return home.

“As Christians in Gombe State, tribe should not be the benchmark for loving one another, let’s embrace everyone as brothers and sisters beyond our divides.’’

On COVID-19 situation, Ishaya said there was no cause for alarm as only one person tested positive on arrival and was receiving medical attention.

He said that the remaining pilgrims had been tested twice and all returned negative.