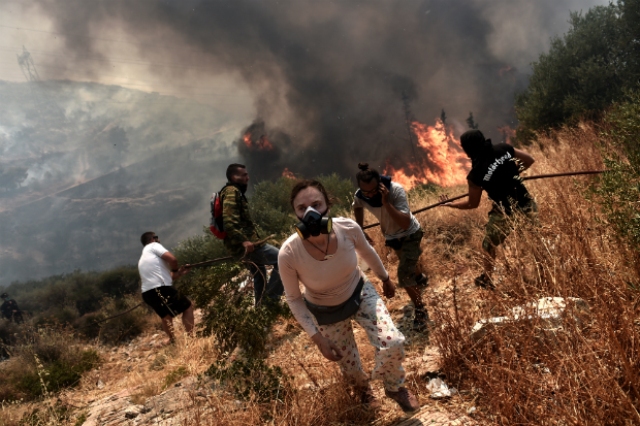 A brush fire broke out to the east of Athens, forcing the evacuation of a refugee camp near the port of Lavrio, the state broadcaster ERT reported on Thursday.

A large contingent of firefighters, backed up by aircraft, were struggling to bring the blaze under control amid bone-dry conditions.

The Greek civil defence has been warning of the danger of wildfires because of a long drought, hot weather and strong winds blowing across nearly all of Greece.

A fire which erupted also east of Athens and then burned out of control in July 2018 killed 102 people and destroyed or badly damaged more than 1,000 homes.

News Agency of Nigeria (NAN) recalls that at least four other wildfires broke out across the country, including one north of the capital.

Greece applied for assistance from other European countries.

Strong winds had fanned the forest fire in the Lakonia area, on the tip of the Peloponnese.

Attempts by a coastguard vessel and other boats to rescue scores of people trapped on a beach were hampered by rough seas.

Local media reported that two summer camps and a health centre in the seaside town of Neapoli had to be evacuated.

One of the seven firefighting planes battling the Lakonia fire had to make an emergency landing. Its two pilots were transferred to a local hospital, but were not seriously hurt.

Two helicopters, 120 firefighters and nearly 30 soldiers have been tackling the blaze.

The fire in Athens broke out on brush land on Mount Hymettus around Friday at midday near the northeastern district of Kareas and later spread to the outskirts of residential areas.

A neighbourhood playground was razed and flames surrounded the local church. Dozens of people, including elderly women covering their faces with headscarves, tried to put out the flames with buckets of water.
Within a few hours, the blaze had crossed the mountain and was threatening the districts of Ilioupoli and Glyfada close to the Athens coast.

Another fire in the southeast of the Peloponnese peninsula, near the coastal town of Neapoli, burned down several homes and devastated agricultural land.