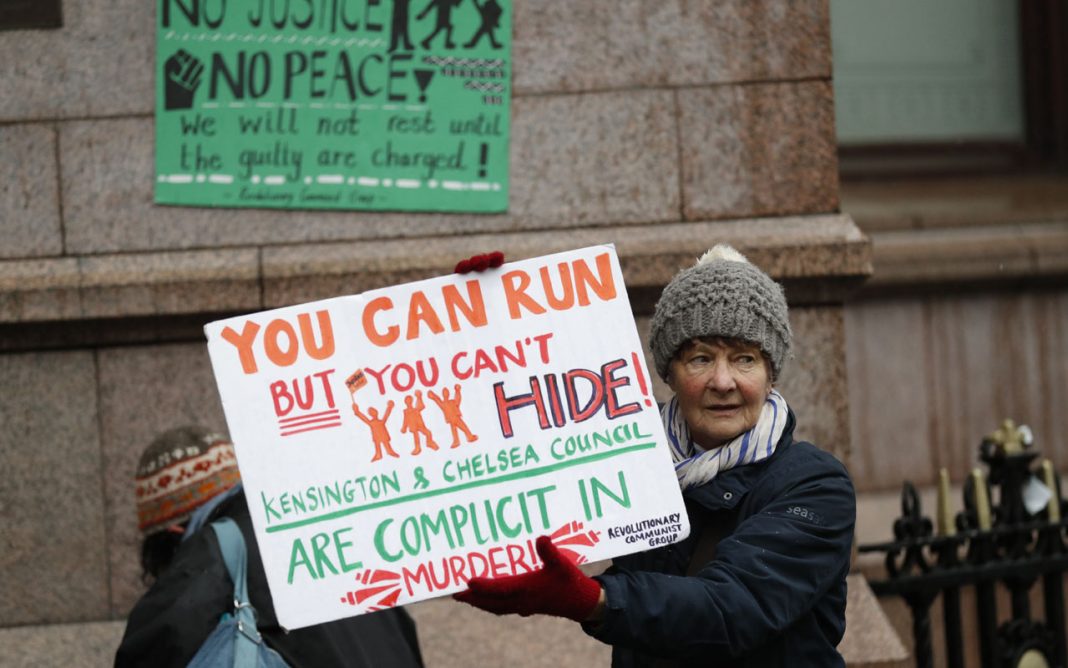 A protester holds a placard outside the venue in London on December 11, 2017 holding procedural hearings ahead of an inquiry into the fire at Grenfell Tower in north Kensington which claimed 70 lives. Six months after a fire ripped through the Grenfell Tower apartment block in London killing 70, survivors are traumatised and bitter, saying they have been abandoned to their fate. / AFP PHOTO / Adrian DENNIS

The criminal investigation into the Grenfell Tower fire in London in which 71 people were killed is “unprecedented”, a police spokesman said on Monday at the opening of a public inquiry into the blaze.

“Outside certain counter-terrorism inquiries, the investigation is unprecedented in terms of its scale and complexity,” Jeremy Johnson, a lawyer for London’s Metropolitan Police, said at the hearing.

The investigation into the west London blaze involves a team of 187 police officers and civilian staff and has so far taken statements from 1,144 witnesses, he said.

“Nothing has been excluded from the scope of the criminal investigation,” he said, promising a “meticulous, thorough and fearless” probe.

Scotland Yard said last month that 71 people had died, including a stillborn baby. Police said they were hoping to wrap up their investigation in late 2018.

The public inquiry, which is expected to produce recommendations for fire safety in public housing, will run alongside the police investigation.

Survivors and people who lived in the vicinity of the apartment block have already criticised the inquiry, however, saying they are not sufficiently involved.

Monday’s hearing ruled that 424 individuals or groups, including some survivors, would be granted “core participant” status in the inquiry meaning they have access to documents, can make statements and can question witnesses through legal representatives.

The Equality and Human Rights Commission, a non-departmental public body, said it had begun its own investigation that would look at issues that might be “overlooked” by the official inquiry.