1 of 10
Napoli’s midfielder from Poland Piotr Zielinski (not seen) celebrates with Napoli’s Slovakian midfielder Marek Hamsik (R) after scoring during the Italian Serie A football match Chievo vs Napoli at “Bentegodi Stadium” in Verona on February 19, 2017.
GIUSEPPE CACACE / AFP 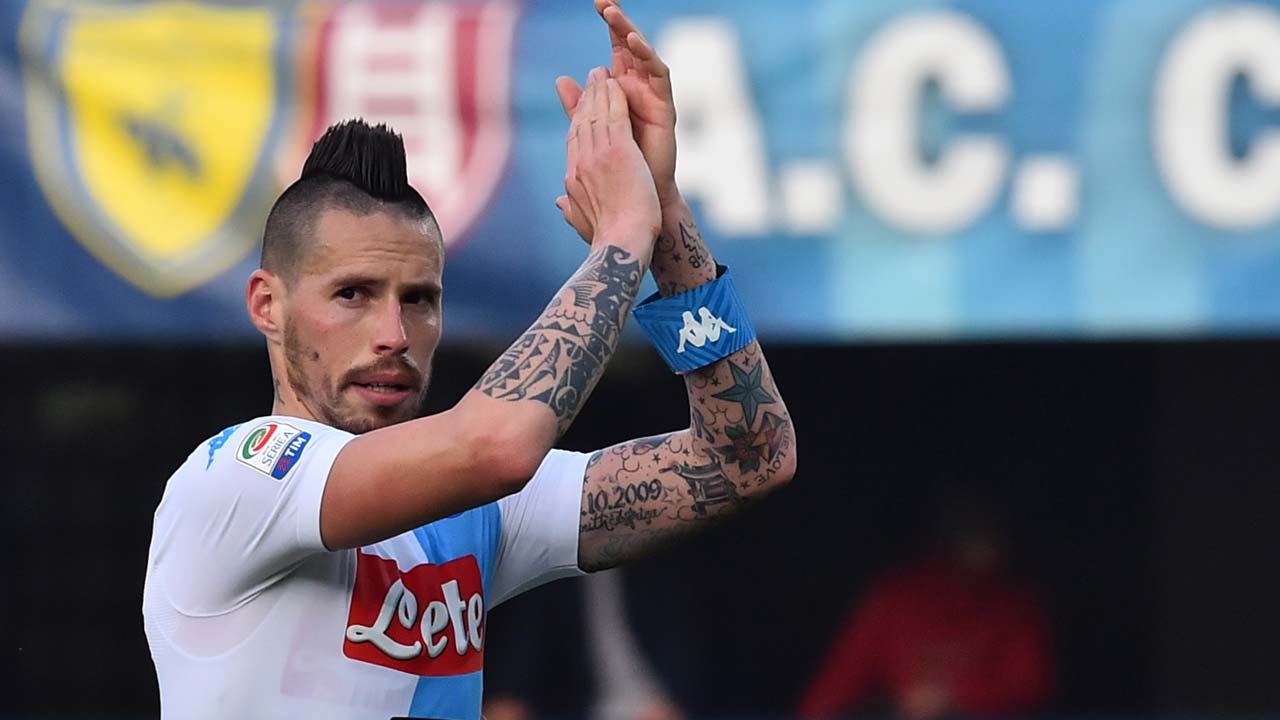 Napoli’s Slovakian midfielder Marek Hamsik acknowledges the public at the end of the Italian Serie A football match Chievo vs Napoli at the Bentegodi stadium in Verona on February 19, 2017.
GIUSEPPE CACACE / AFP

Marek Hamsik moved to within three goals of Diego Maradona’s Napoli record in a 3-1 win at Chievo as veteran Zdenek Zeman steered Pescara to a first win since August in a 5-0 rout of Genoa on Sunday.

Slovakia midfielder Hamsik had moved to within four goals of Maradona’s 115-goal club record with his maiden Serie A hat-trick in a 7-1 rout at Bologna two weeks ago taking his tally to 111.

And the 30-year-old attacking midfielder moved a step closer to becoming the southerners’ all-time top scorer with an easy tap-in seven minutes before half-time.

Lorenzo Insigne, who hit Napoli’s only goal in a 3-1 Champions League defeat at Real Madrid in midweek, broke the deadlock on 31 minutes with a superb curling strike that beat Stefano Sorrentino at his far post.

Piotr Zielinskini had Napoli 3-0 to the good before the hour with a deflected strike and although Riccardo Meggiorini beat Pepe Reina with a stunner for a 72nd-minute consolation, it proved too little too late.

Chievo remain in 11th spot, 31 points behind Juventus but well clear of a relegation zone from which Pescara will now harbour hopes of escaping.

Zeman, a legendary figure in the Italian game who has coached Roma, Lazio, Napoli and Cagliari, felt compelled to return to Pescara following the sacking of Massimo Oddo in midweek because he said he “owed” the club something.

The 69-year-old, until last year the coach of Swiss side FC Lugano, famously coached Marco Verratti, Ciro Immobile and Lorenzo Insigne at his previous spell at Pescara, whom he quit to begin the first of two spells at Roma.

The chain-smoking Czech is known for a particularly offensive game built around a 4-3-3 formation, and Pescara were on fire from kick-off.

Alberto Cerri chased a long ball down the left, got past his marker, kept the ball from onrushing ‘keeper Eugenio Lamanna and, from an impossible angle, saw his strike somehow deflect off Lucas Orban and into the net.

Pescara’s only previous win this season was a shock 3-0 away defeat of Sassuolo last August, but Zeman’s revived side were 3-0 in front by half-time thanks to goals by Gianluca Caprari and Ahmad Benali.

Caprari secured his brace in the 81st minute and Cerri finally got on the scoresheet six minutes later.

Pecara remain rooted to the bottom on 12 points, 49 behind Juventus and 10 adrift of fourth-from-bottom Empoli while Genoa dropped to 16th.

Elsewhere, Seko Fofana sent Udinese fans into raptures with a superb long-distance volley after coolly flicking Duvan Zapata’s pass into the air in the seventh minute.

But hopes of dominating a mid-table battle with Sassuolo were tempered by Frenchman Gregoire Defrel, who came off the bench to hit a second-half brace in the space of nine minutes.

Sampdoria got back on level terms soon after, Fabio Quagliarella staying on his feet to connect with Luis Muriel’s deflected punt from deep on the left to beat Gabriel on the volley to secure a share of the spoils.

Earlier Sunday, 20-year-old Brazil international Gabriel ‘Gabigol’ Barbosa came off the bench to hit his maiden Serie A goal for Inter Milan to secure a 1-0 win at Bologna that has boosted their Europa League qualifying hopes.