How one woman’s struggles embody the heroics of a race 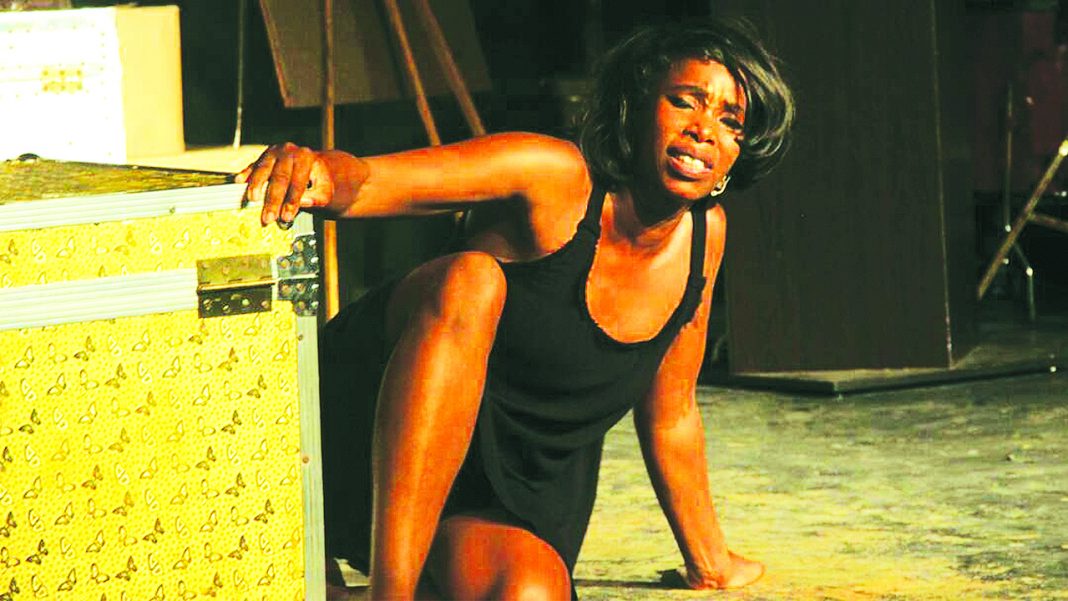 Roots and Blossom Productions’ description of Ese Brume’s performance of My Nina Simone Trip as “a hallucinatory journey of the loves, passion, pain, anger and complexities of the inimitable music, art and life of Nina Simone, written and performed by international award-winning actress and vocalist Ese Brume, a lifelong fan of Nina Simone” aptly sums up the artistic piece that is at once intense, grand and ennobling.

It continues, “This production is a bold and fresh embodiment of the intricacies of Ms Simone, as known by her legions of fans across the globe. Directed by the venerable theatre director – Najite Dede, Brume’s performance is a dense rendering of the many layers of Nina Simone’s complex, thorny, and byzantine life.

“The one-woman show is framed with Simone’s music (some of which have been adapted with a domestic flavour), against a tapestry of intense and dramatic narratives, which have you spellbound for the duration of the one hour show and beyond! Nina Simone’s life’s trajectory and musical legacy – a rich mine of exploration and inspiration – is of relevance today for humanity.”

Indeed, so intense and spellbinding is the performance that it still echoes in the mind long after it would have ended and you would have driven across Third Mainland bridge and safely tucked in bed. And Simone speaks a universal language of suffering and occasional joy in her life and music journey, a journey that starts from rock bottom in America’s racial ladder to which blacks are rooted at the bottom and denied every avenue of ever rising to the top.

But Simone was among the few exceptions, who put her music in the service of activism during the Civil Rights Movements of the 1960s and beyond and rose to the very top.

Born Eunice Kathleen Waymon on February 21, 1933; died April 21, 2003, Simome had to change her name and create for herself a new image from her family’s, her father being a church man. Much against the advice of her mother to keep her music performance to church, Simone ventured farther afield to the circular, a decision that would make her a global music icon, but one which would also bring her deep despair both at personal and artistic levels.

Simone would experience rejection on account of her skin colour at an early stage, imprinting in her young mind deep pains at being denied admission into Curtis Institute of Music in Philadelphia. That denial and all that it embodied would become a lifelong artistic theme that questions the place of black people in the world, the question of identity and how black beauty is defined in a world that creates demarcation between black and white.

This would also endear her to activism and freedom for black people and bring her close to the leading lights of the time – Martin Luther King, Malcolm X and the whole Civil Rights Movement of her time.

Spiced with a music band that helps her transit from narration to performance, Brume, as writer and interpreter of Simone, scored really high. She is the one-woman act interpreting the blighted age of a race struggling to regain its lost soul in an unfriendly world for which blacks were at the receiving end of racism.

Indeed, the entire African-American life in totality, as it struggled against racial discrimination, finds expression in Simone’s personal narrative amplified through the universal language of her music that is a fusion of jazz, classical, blues, folk, R&B, gospel and pop.

And because she could not divorce her art from the contemporary problems of her day, Simone effectively put her art in service of advocacy and activism and it easily gained resonance and set her apart. Simone does not only question her being black, she also queries the black woman in her. Who is she as a black woman? Of what value or significance does she carry?

In spite of her stardom, she isn’t spared the ugliness that comes with being a woman – being battered as a wife – and she wonders why a woman has to marry a man who shows early signs of violence while dating her. Is it the fear of being lonely as a single woman, she asks herself? It is the most poignant self-interrogation ever a woman can undertake, to question the rational for partnering with a man you know would not hesitate to lay his hand on you.

The criminal behaviour of record labels to always cheat artistes is another area Simone has to deal with. It almost renders her bankrupt, and brings her to the lowest point of her life when she hit the streets, loveless and starkly alone. But when she is finally able to pull herself up by the bootstraps, she takes things into her hand and shoots and misses a record label owner.

Scared, he pays her up and she eventually relocates to France to live out her days. Ironically, Curtis Institute of Music that denied her scholarship to study music would honour her two days before she died!

In a certain sense, there is a way in which Brume’s life parallels Simone’s, the woman she admires so much and whose life she performs. In fact, performing Simone, for Brume, is like living in the other woman’s skin.

Brume might not have experienced Simone’s racial discrimination and rejections, but she inhabits the same city or country as the one Simone retires to away from the persecution of her native America; it is where Brume is living out her artistic life.

And so when Brume mounts the stage, she is the incarnate Simone, who bears the pains and scares and heroics of a much-maligned race. It telling Simone’s story, Brume is also telling the story of her African roots, an extension of Simone’s American’s life.

And there is no other time in history when the question of blackness agitates rational minds than now, with the much advertised Libya’s slave camps and the multiple deaths in the Mediterranean Sea of African youths desperate to cross to Europe for better lives away from the harshness back home in self-inflicted bad governance.

So, whether in Simone’s racial America or in under-developed Africa, the question of the place of the black man in world’s reckoning remains. How does the black man rebuild his dignity and humanness? Why is he always at the receiving end of the world’s ugliness? Why is his humanity always in question?

These are legitimate questions that Brume’s My Nina Simone Trip raises. And these questions make the performance all the more urgent in scope. Brume’s charged artistic depth that easily oscillates between extreme moods of joy and sadness also brands these questions deeply into the minds of audiences.

Although performed thrice at African Artists’ Foundation and Freedom Park all in Lagos last week, My Nina Simone Trip deserves a bigger performance space and audience for its artistic and advocacy depth, which corporate sponsorship can help bring about.

Actress, writer, vocalist and trilingual, Brume was born and bred in Lagos, Nigeria. Cosmopolitan at a young age, she has travelled and lived in various European countries.

Trilingual, she majored in French Language and Literature at University College, London, and made the move to Paris to work with the Cameroonian film director and producer, Jean-Pierre Bekolo.

From cinema screenplay research, writing and producing, she found herself on stage, creating a niche and a name for herself as an actress-performer-vocalist in the exclusive contemporary Parisian theatre scene.

She has over 20 years of experience working with directors such as Joris Lacoste, Gildas Milin, Benoît Bradel, Frédéric Fisbach, Roland Fichet; touring Europe, Africa, America with their plays.

On the Parisian music scene, she performed and recorded with the jazz saxophonist Julien Lourau’s Groove Gang, as a spoken word artist and combined vocalization and rhythmic experimentation with the internationally renowned Greek composer and contemporary music theatre director, George Aperghis.

And more recently, after a rich experience as Executive Producer of the Nigerian Musical Diasporama – a music festival at the occasion of the London Olympics for which she won an award showcasing artists such as ASA, Tony Allen, Femi Kuti, Keziah Jones, Brume’s artistic path has been drawn towards her passion: music, and her roots: Nigeria.

Collaborating both as a performer and a writer with Nigerian-based internationally acclaimed choreographer and dancer, Qudus Onikeku, on his piece, We Almost Forgot provided the platform for which she could express her roots, her cosmopolitanism and her creativity.