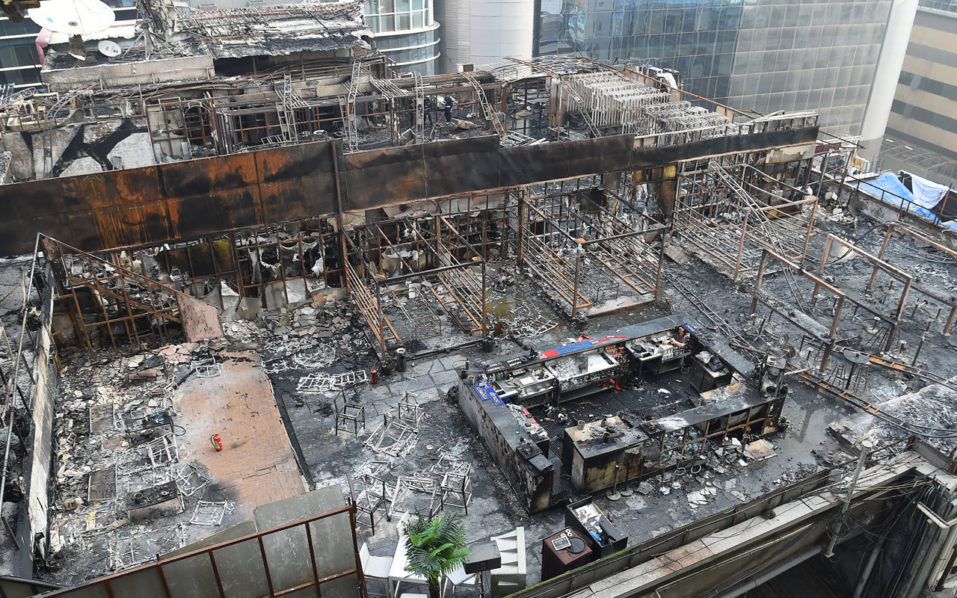 At least 14 people were killed when a huge blaze tore through a popular restaurant in Mumbai early Friday, police said, in the latest disaster to raise concerns over fire safety in India.

Many of the victims were young women who were attending a birthday party on the rooftop when the fire broke out. Doctors said they died of asphyxiation, apparently as they tried to flee the burning building.

Local media reported that a false ceiling had collapsed in the four-storey building in the Indian financial capital, trapping people inside as they tried to escape.

The fire was extinguished in the early hours but an AFP reporter at the scene said the rooftop where the party was taking place had been gutted, with blackened ice buckets and ashtrays strewn around.

“Fourteen people have succumbed to their injuries and remaining victims have been discharged from the KEM hospital. Most of the deaths were due to asphyxiation,” Avinash Supe, dean of the local KEM hospital told AFP.

Police said they were investigating the cause of the fire, and had filed a preliminary case against the restaurant’s owners.

Eleven of the victims were female partygoers, according to authorities.

– Ceiling in flames –
One woman who said she was in the building at the time told of the desperate scenes as people tried to escape.

“There was a stampede and someone pushed me,” Sulbha Arora said on Twitter.

“People were running over me even as the ceiling above me was collapsing in flames. Still don’t know how I got out alive. Some powers were definitely protecting me.”

Accidental fires are common across India because of poor safety standards and lax enforcement of regulations.

A fire swept through a sweet shop in Mumbai earlier this month, sparking a building collapse which killed 12 sleeping workers.

In September, a gas cylinder exploded in an unfinished building in Mumbai killing six people.

Such disasters are particularly common in Mumbai, where millions live in cramped, dilapidated properties because of high rental prices. Activists say builders and landlords often cut corners on safety to save costs.

Among the latest victims were brothers Dhairya and Vishwa Lalani, both in their 20s, who had gone to the restaurant for dinner and who were buried on Friday.

Their cousin Viral Chheda said the two men were seated near the exit and managed to escape, but went back in after realising their aunt was missing. She was also among the victims.

“We are utterly devastated,” Chheda told AFP as he buried his cousins.

“They tried to save lives and gave up their own. The fire was on a massive scale,” he added, calling for those behind the tragedy to be brought to justice.

Nearly 200 mourners attended the men’s funeral and several expressed concern and anger about safety standards in the city.

The blaze was at the city’s Kamala Mills compound, which also houses hotels and media organisations.

The Times Network, which runs several national news channels, said its operations had been hit.

“The magnitude of the fire was huge, disrupting our operations temporarily. All our employees were evacuated safely,” it said in a statement.

Prime Minister Narendra Modi tweeted that he was “anguished by the fire in Mumbai”.

“My thoughts are with the bereaved families in this hour of grief. I pray that those injured recover quickly,” he said.