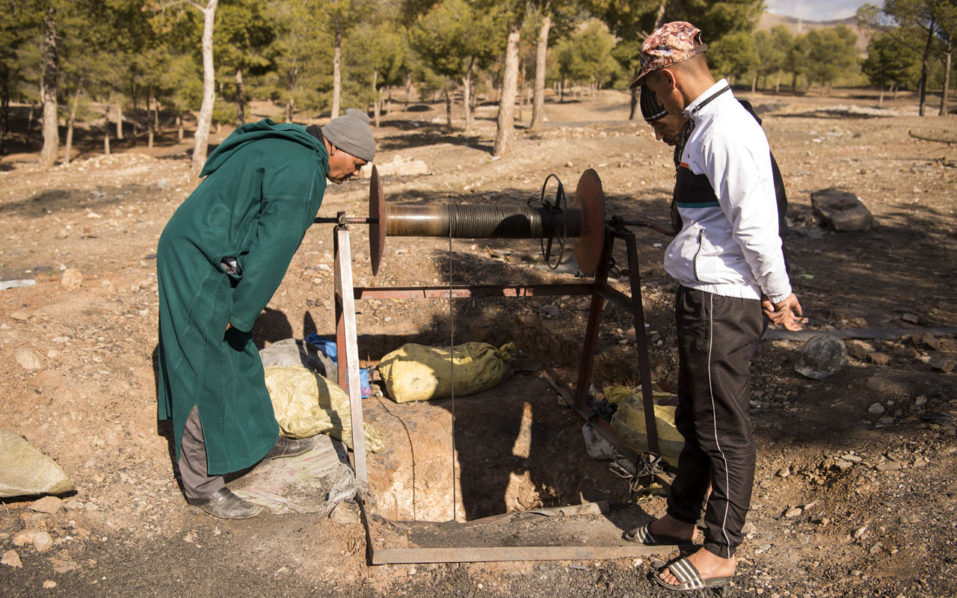 Moroccan men stand by an abandoned coal mine in the northeastern city of Jerada, 60 kilometres southwest of Oujda in the Oriental region, on December 26, 2017. They call them “the mines of death”. In the neglected northern Moroccan mining city of Jerada, hundreds of people risk their lives every day to scrape a meagre living from perilous abandoned coal pits. Last week, two brothers died in a tunnel accident, 85 metres (90 yards) below ground. Abderrazak Daioui, who was with them, narrowly escaped. / AFP PHOTO / FADEL SENNA

They call them “the mines of death”. In the neglected northern Moroccan mining city of Jerada, hundreds of people risk their lives every day to scrape a meagre living from perilous abandoned coal pits.

Abderrazak Daioui, who was with the brothers, narrowly escaped the same fate.

“Houcine and Jedouane were just below me,” the 22-year-old said.

“One of them dug horizontally and hit a water well. We were flooded. I hung on my rope and managed to get back up. They weren’t so lucky.”

Living in a modest, unfinished house, Abderrazak works to support his wife and daughter, his six brothers and his 80-year-old father — himself a former miner.

“There is no alternative, no work. That’s why I risk my life,” Abderrazak said.

Earning as little as 100 dirhams ($11, nine euros) per day, he has worked in the mines for over three years.

He says he drinks “lots of milk” in a bid to counter the effects of the coal dust he inhales.

The deaths of the two brothers, aged 23 and 30, sparked a wave of protests as residents accused the authorities of leaving them to their fate.

Thousands of people protested Tuesday against economic marginalisation, accusing authorities of “abandoning” them.

– ‘Same fate as parents’ –
“The people want an economic alternative,” demonstrators chanted, carrying Moroccan flags on their shoulders and insisting that their protests were peaceful.

“How is it that young people who have done their studies end up in the pits of death to face the same fate as their parents?” asked Said, an unemployed graduate from the city.

The mine was the economic lifeblood of Jerada, employing some 9,000 workers, until it was shut down in the late 1990s by authorities who argued it was too expensive to run.

Thousands of people have since left the city and the population has fallen from 60,000 to fewer than 45,000.

Despite the mine being shuttered, young people continue to brave the pits with little safety equipment, extracting coal by hand for sale to local traders.

“Deadly accidents are common,” Abderrazak said, adding that his uncle and two young members of his family had been killed.

Eight decades of mining have left their mark on people’s health in the impoverished town.

At Jerada hospital on the city’s outskirts, 20 patients, mostly former miners, gathered at the pulmonology and silicosis unit.

Mohamed El Berkani, in his 60s, worked the pits for 23 years. He said the centre was set up specifically for mine workers with silicosis.

– ‘Marginalisation’ –
“Miners spit up their lungs until they die,” he said. “So they give us medicine to calm the pain.”

But it appears Friday’s accident was one tragedy too many for Jerada residents.

On Tuesday, demonstrators filled the streets for the third day in a row, expressing their anger at their “marginalisation” and demanding work.

The protestors echoed slogans of the year-old Hirak movement in nearby Hoceima, where anger over the 2016 death of a fishmonger sparked long-running mass demonstrations demanding jobs, development and an end to graft.

Moroccan Prime Minister Saad Eddine El Othmani said he was ready to meet lawmakers from Jerada to “discuss problems in the region”.

Energy and Mines Minister Aziz Rebbah said the state was building a coal-fired power station near the city that will employ 500 people, mostly from the region.

“We will also launch a deeper study to assess the area’s mining potential and encourage investors to come,” he said.

The government’s statistics agency says Jerada is one of the poorest areas in Morocco.

Rabat has put in place some economic projects to soften the blow of the pit closure, but Said Zeroual of the Moroccan Association of Human Rights argues they were “not enough”.

“The city has no other resources. There are no jobs, no factories,” he said.