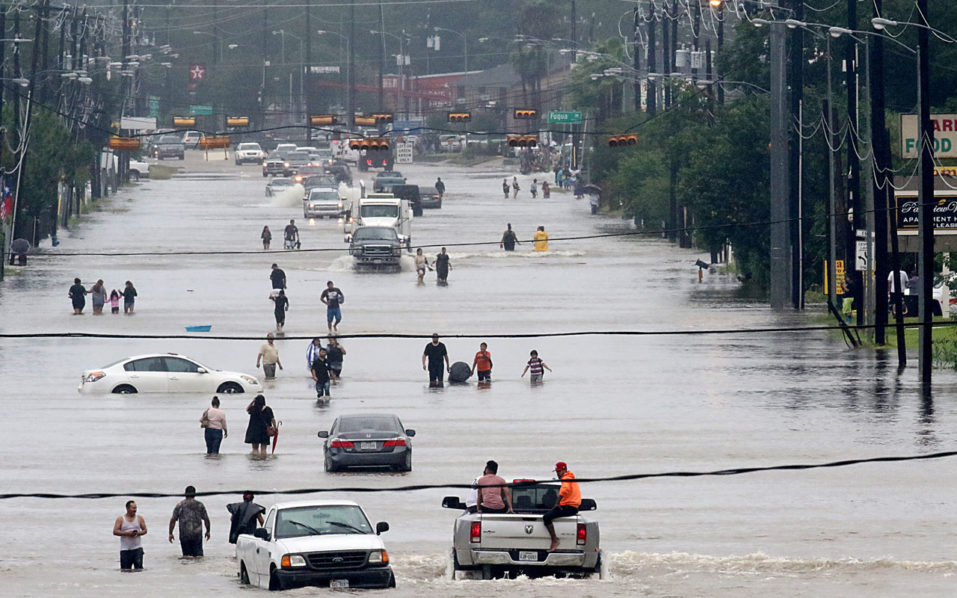 (FILES) This file photo taken on August 27, 2017 shows people walking through the flooded waters of Telephone Rd. in Houston battled with tropical storm Harvey and resulting floods. Fierce hurricanes, heat waves, floods and wildfires ravaged the planet in 2017, as scientists said the role of climate change in causing or worsening certain natural disasters has grown increasingly clear. It was also the year the world’s second largest polluter, the United States, turned its back on the 196-nation Paris climate deal meant to limit global warming to under two degrees Celsius (1.5 degrees Fahrenheit) over pre-industrial levels. / AFP PHOTO / Thomas B. Shea / With AFP Story by Kerry SHERDAN: Hurricanes, heat waves, fires ravaged planet in 2017

Fierce hurricanes, heat waves, floods and wildfires ravaged the planet in 2017, as scientists said the role of climate change in causing or worsening certain natural disasters has grown increasingly clear.

It was also the year the world’s second largest polluter, the United States, turned its back on the 196-nation Paris climate deal meant to limit global warming to under two degrees Celsius (1.5 degrees Fahrenheit) over pre-industrial levels.

President Donald Trump, who has dismissed global warming as a Chinese hoax, vowed to quit the 2015 Paris accord and tapped fossil fuel allies to key environmental posts.

His administration also dropped climate change from the list of national security threats, announced plans to auction off vast swaths of the Gulf of Mexico to oil and gas drilling, and signed a proposal to eliminate the Clean Power Plan, aimed at limiting the release of polluting greenhouse gases.

Trump says the goal is to make America a dominant source of energy for the world, and to create jobs.

“Together, we are going to start a new energy revolution — one that celebrates American production on American soil,” Trump said in June.

In October, Trump signed a proclamation to make America a net energy exporter by 2026, reviving the coal industry and seeking to access the estimated $50 trillion in untapped shale, oil, and natural gas reserves, particularly on federal lands.

While the fossil fuel industry has applauded the moves, scientists have expressed alarm.

“The Trump administration, in less than a year, has done more to undermine climate policy than even the worst previous administration on climate (i.e. George W Bush) had done over the course of two full terms,” said Michael Mann, a climatologist and geophysicist at Pennsylvania State University, in an email to AFP.

“They must be stopped,” he added, because their actions “pose an existential threat to us and our children and grandchildren.”

‘New normal’
The more fossil fuels we burn, the hotter the planet becomes due to the accumulation of heat-trapping greenhouse gases.

The world is currently on track for its third warmest year in modern times.

Among the fiercest storms seen this year were severe monsoon rains in Bangladesh, India and Nepal that killed more than 1,200 people and affected 40 million people, destroying homes, livestock and crops, according to the UN Office for the Coordination of Humanitarian Affairs.

Spain and Portugal have grappled with a deadly drought that dried up rivers, killed crops and fueled wildfires.

Meanwhile, an unusually active hurricane season roiled the Atlantic, Gulf of Mexico and Caribbean with 17 big storms, the most since 2005.

Major, deadly hurricanes included Harvey, which flooded Texas with 50 inches (125 centimeters) of rain in some places. The massively powerful Irma devastated the Caribbean and Florida, while Maria flattened much of Puerto Rico.

California Governor Jerry Brown, whose state is currently battling its third largest wildfire since 1932, spoke this month of how such devastation could be the “new normal.”

“This could be something that happens every year or every few years,” Brown told reporters.

That phrase was echoed in the 2017 Arctic Report Card, an international peer-reviewed report on the fragile Arctic, which is warming at twice the pace of the rest of the world.

“The Arctic environmental system has reached a ‘new normal,'” that will raise sea levels, alter weather patterns and unleash more extreme weather across the globe, it said.

US ‘doubling down’
Just as extreme are the differing actions around the world to address climate change.

At a Paris summit this month, banks and companies pledged to move billions of dollars out of coal, oil and natural gas.

The United States, however, is “doubling down on fossil fuels to power the nation and the world,” said Julia Olson of the Children’s Trust, which along with dozens of US children is suing the US government for failing to protect the nation’s air, land and water.

Peter Gleick, a president-emeritus of the Pacific Institute, a nonpartisan think tank, said Trump’s actions will reverberate for decades.

“Just as human-caused climate change is accelerating and having an increasingly clear impact on disasters and extreme weather events, the US administration is turning its back on climate science and policies that are needed to protect the American people, property, and the environment,” he told AFP.

“The anti-science agenda of the Trump administration will, without doubt, lead to preventable deaths and disasters, and is inexcusable.”