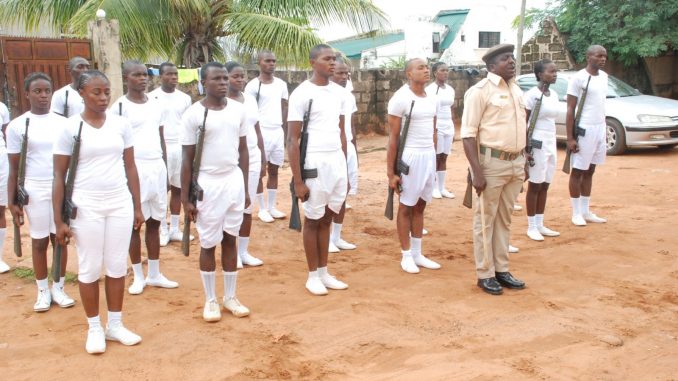 Usman-Kantungo said their arrest followed a petition received from one Aminu Binji on Sept. 28, this year, scammed by the suspects allegedly involved in fake recruitment into Nigerian Immigration Service, NIS, in Sokoto state.

Mr Usman-Kantungo noted that the commission’s officials thereafter burst members of the syndicate who allegedly specialise in defrauding unsuspecting applicants with non-existing job opportunities in lucrative places such as the NIS, Nigerian Customs Service, NCS, and Nigerian Ports Authority, NPA.

He said the petitioner, Binji, and his friend, Bello Abubakar, who were victims of the syndicate, were lured by one Aminu Sifawa, a staff of the Sokoto State Ministry of Youth and Sports. Sifawa is now at large.

The EFCC’s zonal Head said both victims were each scammed of N350,000 for the non-existing jobs at the NIS.

He explained that the suspects pretentiously collected the total sum of N1.2 million from the two victims as training fees and travelling fares.

He said the suspects connived to fabricate and forge documents with which they lured unsuspecting job seekers.

Mr Usman-Kantungo said the suspects perfected their strategies and organised a purported NIS training at the premises of Kwannawa primary school in Sokoto metropolis to make real their fake recruitment exercise.

He explained that another accomplice of theirs, a serving Superintendent of Immigration who appeared in uniform and lectured the trainees and also sold photocopies of NIS manuals to them, had been arrested and handed over to NIS management.

According to him, no fewer than 25 victims have so far come forward to report that they have been scammed of several thousands of Naira.

He cautioned Nigerians to be wary of fraudsters and should always endeavour to double check with relevant authorities for verification, saying government recruitments are not for sale.

Some of the victims, Jeremiah Aganda and Josephine Musa said they were each defrauded N50,000 as fees to join an organisation purportedly known for promoting peace and religious understanding, through which the syndicate obtained people searching for jobs.